Basilica on the mark in the Coral-Eclipse

Just the four runners went to post for the highlight of Sandown’s card on Saturday, the Group 1 Coral-Eclipse, though between them they had won nine times at the top level.

St Mark’s Basilica, a dual Classic winner in France this year in the Poule d’Essai des Poulains and Prix du Jockey Club, was sent of favourite in his first race against older horses, namely the high-class duo Addeybb and Mishriff, with the quartet completed by fellow three-year-old El Drama.

Addeybb and Tom Marquand set off in front in the ten-furlong contest, tracked by Mishriff and David Egan on his outside, with Ryan Moore on the favourite and Andrea Atzeni happy to drop in behind the two pace-setters, as the field stayed away from the inside rail.

Turning for home, the runners raced towards the centre of the course, and Marquand was the first to ask his mount for more with three furlongs to run, as Saudi Cup hero Mishriff loomed large on his outside.

Mishriff hit the front two furlongs from home but just behind him, St Mark’s Basilica was starting to wind up strongly and when his rider asked him to put the race to bed, the response was impressive. St Mark’s Basilica hit the front approaching the furlong-marker and stayed on powerfully to record a three-and-a-half length victory over Addeybb, who re-took second from the fading Mishriff. 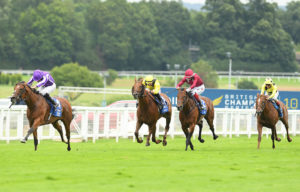 The victory of St Mark’s Basilica was a record-equalling sixth strike in the race for trainer Aidan O’Brien, who said of Coolmore’s son of Siyouni: “Ryan was blown away by him out there today. He couldn’t believe when he asked him to quicken how well he quickened. He is a relaxed traveller so he doesn’t use any energy, so when he comes on he comes on slowly and when they do go for him he really turns it on.

“He came here today and ran against two proper older horses. They weren’t middle-of-the-road older horses. There was pressure on him as he was going to be exposed if he wasn’t very good. They didn’t go very fast and he gave the two older horses first run and Ryan followed them in behind, but he quickened up and put it to bed very quickly, which we were very impressed with.

“He is very relaxed. He floats along. He is very professional in his races, quick from the gates but he relaxes. Ryan said the same today, in that he was quick and then relaxed even though the pace wasn’t quick – it didn’t bother him at all.

“You can’t expect to have many horses like that. For me and all the years I’ve trained horses, I can’t remember having one like that. We’ve had horses get into battles and fight and brawl it out, but he is very happy to follow horses and quicken. He puts races to bed very quickly.

“He is progressing all the time. I think the Juddmonte [International] or the Irish Champion [Stakes] will be next but he could do both as there is enough time between them.”

Out of luck in the Eclipse, Tom Marquand still enjoyed an afternoon to remember at the Esher track as he rode a four-timer, headed by the success of Came From The Dark in the Group 3 Coral Charge. Dead-heat scorer Hurricane Ivor, the Tom Ward-trained Farasi Lane and Wink Of An Eye, owned and bred by The Queen, completed his victorious quartet.

The runners were spread across the track as the race entered its final stages but Alpinista found plenty when asked on the testing ground to defeat the running-on Lady Hayes by a length and a quarter under Luke Morris. 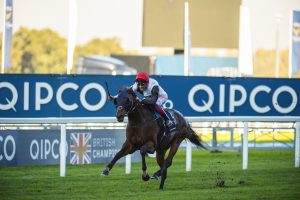 Up Next
Track plan revised for QIPCO British Champions Day