After just six days, the fundraising campaign set up for Laura Barry has exceeded the £30,000 target that was set.

The 24-year-old was diagnosed last year with a rare and aggressive form of cancer that attacks the nerve ducks. It all started when she started suffering pain in her left leg.

Although the tumour was treated, a second one was discovered last November. This has left her paralysed in the left leg from the hip downwards.

Originally from Limerick on the west coast of Ireland, Barry made her journey to England in 2010 to join the apprentice ranks of Richard Fahey’s Malton yard.

“She was apprentice jockey to me for a few seasons. She was a very popular girl with everyone and had a great work ethic,” said Fahey.

Her highlights in the saddle included representing Ireland in the HH Sheikha Fatima Bint Mubarak World Apprentice Series in San Francisco, and winning the Prolinx Ladies Silver Championship for the highest strike rate in a season.

Gemma Tutty, fellow rider and best friend, led the fundraising and set up the GoFundMe appeal. The likes of top northern jump jockey Brian Hughes pledged £1,000 to start the fund, while Fahey and the team at Museley Bank followed in with a donation of £5,000.

Tutty said: “Not many of us imagine a pain in our leg at 23-years-old could possibly lead to a cancer diagnosis, and a gruelling rollercoaster year with multiple treatments, complications and operations.

She’s always cracking jokes and having a laugh

“The Injured Jockeys Fund have been brilliant and paid for all her medical fees but there’s only so much they can do. This is why we need to raise funds.”

She added: “Amazingly, despite all of this you never hear her moaning about it, she’s always cracking jokes and having a laugh. It’s never depressing to go see her, always a pleasure.” 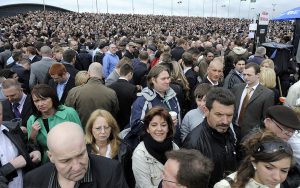 Up Next
Racing second in attendance rankings