Son of Bated Breath was purchased for €95,000 as a foal by David Cox’s operation before being offered at Book 2 on Tuesday

A bold €95,000 pinhook by David Cox’s Baroda Stud paid off in spectacular style early into Tuesday’s trade at Book 2 of the Tattersalls October Sale when the colt in question, a son of Bated Breath [Lot 828], made 260,000gns to Anthony Stroud of Stroud Coleman Bloodstock.

The May-foaled youngster is a half-brother to Molecomb Stakes winner Rumble Inthejungle and the Group 2-placed Great Prospector, and out of Guana, an unraced relation to Birchwood and Prince Sabo.

“Looking at him in the summer, we did wonder whether he would be big enough,” said Cox. “But you had to take into account his foaling date [May 14] and then he did really well during the last few weeks of prep – he’s a smashing colt. The team got him looking really good and it’s a credit to them.

“It was a nervous time in the spring with everything that was going on but we were always looking at Book 2 with this horse to give him that bit more time.

“We bought him at Goffs off Acorn Stud. It’s a great, fast family, the mare has already done it and I know Simon Crisford thinks the world of the two-year-old out of her, Caribbean Sunset.”

Monday’s session was surprisingly strong given the outside world and early indications out of this morning’s early exchanges suggests that today will be the same.

“It was very busy at the weekend – the number of trainers looking was very encouraging,” said Cox. “So I suspected that it could be strong. It’s amazing considering what is going on. We’re very lucky to be having a sale at all – everything has been very well run by the sale companies.” 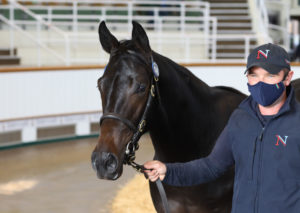 Up Next
Kingman colt tops opening day of Book 2