With the jumps season beginning to fully gear up, Chepstow’s valuable two day opener was to prove fruitful this time around for eight-time champion jumps trainer Paul Nicholls.

Despite only having won winner on the Saturday, he was to have a four-timer on the second day which included a success in the feature race – the Grade 2 Persian War Novices Hurdle – with five-year-old gelding, El Bandit.

The son of Milan was left with an easier task after the J.P McManus-owned No Comment blundered and unseated Barry Geraghty after the second flight. With the field stacking up into the home turn, Sean Bowen was one of the first to become animated in the saddle aboard El Bandit.

As leader Coo Star Sivola upped the ante over the fourth last, El Bandit looked to be struggling still five-lengths off the pace without losing too much ground. Slowly but surely El Bandit got on terms, with three runners including Lanarkshire-raider Mirsaale, coming to the last in a line. The Nicholls charge landed just ahead after the last and kept on well to fend off a rallying Coo Star Sivola by a length.

El Bandit was having his first run in Graded company and was coming on the back of an easy win in a novices hurdle at Fontwell back in June. His owners the triumvirate of Donlon, Fulton and Webb have an exciting young prospect to look forward for the remainder of the season, and are perhaps best remembered with Caid Du Berlais who won a pulsating Paddy Power Gold Cup at Cheltenham’s November meeting in 2014.

Nicholls’s fine record in the Persian War continues, as indeed the race’s most successful handler. Now a sixth victory, his first came with five-time Grade 2-winner Valley Henry in 2000 who was partnered by Joe Tizzard. Ten years later, dual King George VI Chase hero Silviniaco Conti lifted the prize before going on to establish himself as one of the best staying chasers around.

The anticipated return of Sire De Grugy didn’t materialise as trainer Gary Moore withdrew the ten-year-old from the John Ayres Memorial Handicap Chase on account of the ground.

Moore was left to make the decision after son Jamie felt it was too lively for the former champion chaser. Ingleside Stables will look for a prep race elsewhere before tackling the Tingle Creek Chase in December, a race which he has won twice. 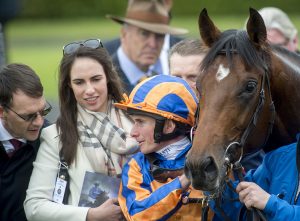 Up Next
Dewhurst domination by prime pupil