Before our time
Stories

Jockey George Baker remains in a stable condition after suffering a fall from his mount on the frozen lake at St Moritz in Switzerland.

A three-time Group 1 winning rider, Baker was partnering Boomerang Bob in the first race of the day in front of a crowd of 10,000.

Both were brought down when two rivals in front of them fell inside the final furlong. Baker was initially placed in an induced coma and airlifted to a trauma hospital 100km away in Chur.

The remainder of the card was cancelled and unfortunately Jamie Osborne’s eight-year-old gelding was fatally injured by the fall.

Baker’s wife Nicola, who flew out immediately to be by his side, said: “The best thing is he’s out of a coma, breathing on his own and able to move of his own accord, because when I got on the plane the last I knew was he was in a coma and breathing through apparatus.

“It wasn’t until I landed I learned any more, which came as a massive relief. Everything else is a bonus.”

Baker had one of his best seasons to date in 2016 taking his first Classic, the Ladbrokes St Leger, with the Laura Mongan-trained Harbour Law, a poignant victory.

A regular around the likes of Lingfield Park, he enjoyed the third of his Group 1 victories at the end of the season in France.

In a typical Bakeresque ride, he brought through Roger Charlton’s Quest For More to land the two mile and a half Prix du Cadran at Chantilly.

White Turf, the race organiser’s, said a crack was found in the ice after Baker’s fall.

“Following a detailed investigation by the race management and those responsible for White Turf, a crack in the ice had occurred on the inner rails of the racetrack, some 150m from the finishing line,” said a spokesman for White Turf.

“This meant that water had come up to undermine the racetrack. The safety of the horses and the riders could no longer be guaranteed.” 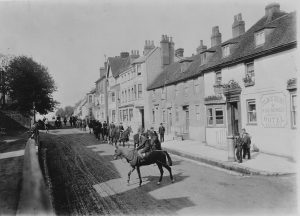 Up Next
Before our time