Gary Moore’s decision to let his stable star Sire De Grugy take his chance against the mighty Sprinter Sacre at Kempton on Friday was fully vindicated as Nicky Henderson’s top-rated steeplechaser was dramatically pulled up mid-race in the Desert Orchid Chase to leave the way clear for Sire De Grugy’s second major victory in less than three weeks.

The winner’s Grade 2 strike follows up his success in the Grade 1 Tingle Creek Chase at Sandown on December 7 and takes the seven-year-old’s tally of wins to 11 in 22 starts, all of which have been in the hands of his trainer’s son, Jamie.

Sprinter Sacre, the winner of his ten previous starts, was eased down by Barry Geraghty after jumping the seventh fence badly and was subsequently found to have an irregular heartbeat. He is currently undergoing tests at Rossdales Equine Hospital in Newmarket.

His early departure from the race meant that Sire De Grugy took up the running from the fourth-last fence, battling home to win by four lengths from the Colin Tizzard-trained Ouiseau De Nuit, while Astracad was another 26 lengths adrift in third for Nigel Twiston-Davies.

“He was in front too soon, that’s why he finished so tired,” said Jamie Moore. “We are none the wiser, but fortune favours the brave.”

His father added: “Jamie hasn’t been able to ride the race he wanted. There’s no way he wanted to be in front that far out. I think they went a good gallop early and Jamie went after one horse [Sprinter Sacre]. He said he saw Barry and knew something was wrong and he just carried on.”

The trainer indicated that he hopes to have Sire De Grugy back in action at Ascot on January 18 in the Clarence House Chase (formerly the Victor Chandler Chase). 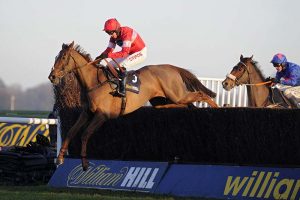 Up Next
Silviniaco Conti is king of Kempton