Bachasson continued his excellent run of form on Tuesday when dominating the Grade 2 Red Mills Chase at Gowran Park.

Jockey Paul Townend kept it simple upon the 4/11 favourite, tracking Spyglass Hill before easing his way to the front for a 16-length win. Castlegrace Paddy stayed on into second, five lengths ahead of Spyglass Hill in third.

It was the fifth consecutive win for Bachasson, an admirably versatile ten-year-old whose wins this year have included the Grade 3 Limestone Lad Hurdle at Naas and Grade 2 Clonmel Oil Chase at Clonmel.

“This fellow was bought as a bumper and hurdles horse but he turned out to have such scope,” said trainer Willie Mullins. “He is so brave. We’ll look for a similar type contest, maybe the Webster Cup at Navan.” 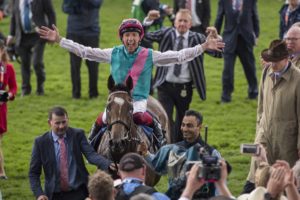 Up Next
Enable scanned in foal to Kingman