The Australian raiders in Newmarket ahead of this year’s Royal Ascot meeting don’t posses quite the star quality of Black Caviar, but let’s face it, who does?

Shamexpress and Sea Siren are nevertheless an exciting duo and as racing fans have learned ever since Choisir burst onto the international stage in 2003, sprinters heading to these shores from Australia should never be under-estimated.

Danny O’Brien has brought the O’Reilly colt Shamexpress from his Melbourne stable and he races here as a four-year-old even though he is just at the end of his three-year-old year by the southern hemisphere season. It is O’Brien’s third attempt at an Ascot prize and he came pretty close in 2011 with Star Witness, who was second in the King’s Stand Stakes then third in the Diamond Jubilee. His first runner in the UK, in 2006, was the mare Glamour Puss, who also contested both those races, finishing sixth and tenth respectively.

Shamexpress, who is stabled like so many of his Australian predecessors at Abington Place on Newmarket’s Bury Road, was put through his paces with a steady canter under Paul Kouris on the Side Hill Canter on Wednesday morning ahead of his bid for King’s Stand Stakes glory next Tuesday.

O’Brien said later, “He took the trip really well which is obviously the big thing. It is a long time travelling but he seemed to handle it.

“Importantly, he is enjoying Newmarket – in the week he has been here, he has settled particularly well into his surroundings. He is a happy colt and seems to be very relaxed. All good so far.

“He has not done any fast work yet – he will have one gallop tomorrow [Friday]. He left Australia very fit so the gallop should put him spot on for Tuesday.

“We had a barrier trial at Flemington and the horse who finished second then, Linton, went on to win a Group 1 sprint, the Stradbroke Handicap, so Shamexpress’s form leaving Australia was very good.

“He is a horse I have always had a good opinion of but it was his win in the Newmarket Handicap which sealed the trip to Royal Ascot. The Newmarket is our biggest Group 1 sprint and has been a strong pointer to past Australian success at Royal Ascot – it was a pretty easy decision to take after that.”

Sea Siren may be a relatively unknown quantity to British and Irish racegoers but the colours in which she races are certainly not. The daughter of Fastnet Rock represents the Coolmore trio of Sue Magnier, Michael Tabor and Derrick Smith, successful just a fortnight ago with Ruler Of The World in the Derby and hungry for another Group 1 prize at the Royal Meeting.

The five-year-old mare, who is being aimed at Saturday’s Diamond Jubilee Stakes, is trained in Sydney by John O’Shea, who was represented at Thursday’s press conference by his assistant Bryce Heys.

Heys said, “There is no doubt [the journey] took its toll but we have been very light on her since. We got her into the pool yesterday and I suspect she is back to where we want her to be.

“Royal Ascot’s six furlongs is definitely testing and she is going to have to adapt to that. Hopefully, she will be ridden with some cover to utilise her turn of foot.”

Sea Siren had an easy gallop on the Golden Mile of the Limekilns on Thursday morning under her British-born work rider Helen Smith.

Heys added, “She got her toe out this morning and she will have a couple of pieces of work before the race. It is a daunting task at Royal Ascot but we have Ryan Moore in the saddle and he will ride her for the first time on Tuesday morning.

“She is a delight to deal with, very laidback with a good constitution as regards her appetite and the work she can take. Her coat has come out again and her appetite is outstanding – she has not left an oat for three days now.” 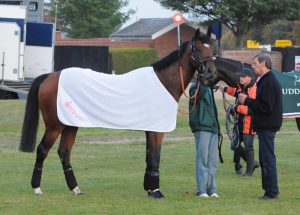 Up Next
Sir Henry Cecil dies at 70