Australia the land of opportunity

Rookie trainer Eddie O’Rourke admits he would not be a trainer at all if he had stayed in his native Ireland, instead of relocating to Australia seven years ago.

O’Rourke and his family in Wexford have been involved in thoroughbreds for generations. He has seen first-hand the decline in conditions and opportunities for young trainers, but also how this could be reversed.

“At home, in Ireland, unless you are in the top echelons, with over 100 horses on the books, you cannot survive on training alone,” he said. “You have to buy and sell, produce young stores horses, yearlings, breezers. You have to do that on top of training. It’s not enough.

“I wouldn’t be training if I was at home. It’s just too hard to compete with the likes of Aidan O’Brien and Dermot Weld.

“You have to keeping selling anything that’s half decent to pay the bills, then your quality is just going up so slowly. You never make a name for yourself.”

In Ireland, even champion trainer O’Brien doesn’t make that much money – at the end of July O’Brien was earning an average of £21,400 per winner.

“The prize-money is great here and that gives owners incentive to invest in horses,” continued O’Rourke. “For a winner at a country meeting it’s AUS$11,000.

He added: “It’s one of the major issues back home that there isn’t as much racing, which means the powerhouses dominate.

“The smaller trainers do get a look in, but not enough of a look in. It becomes impossible for the average trainer, and it’s not worth owners’ while.”

Australia’s model works in a similar vein to the Pari-Mutuel in France, with the pool betting, the TAB, all going back into racing. Money earned through the pools generates prize-money and owners’ schemes.

Prize-money here is great and that gives owners incentive

Each region in Australia has owner and breeder bonus schemes; O’Rourke’s area of New South Wales, for example, offers a minimum of AUS$5,625 bonus prize-money for winning two- and three-year-olds registered for the BOBS or BOBS Extra schemes.

“Ireland could take a lot from how Australia operates,” said O’Rourke. “On a Saturday you get AUS$3,800 for turning up to race if you don’t finish in the top five, because the more runners they have, the more turnover they have on the TAB [in the 2017 financial year the TAB accrued nearly AUS$2billion in revenue].”

Britain and Ireland both have various owners’ schemes too, but the funding streams for those are not necessarily as secure. They tend to require sponsorship.

The Irish Stallion Farms and European Breeders Fund are key organisations funding these bonus schemes, with a focus presently on improving investment in mid-level horses on the Flat and over jumps, and also in mares over jumps. It does work.

O’Rourke went to Australia because he wanted to become a trainer. He was in his mid-20s when he arrived, and was surprised by the welcome he received.

Australian racing is very open to the public

It was an enlightening opening period in the southern hemisphere, focussing on two-year-olds, and it led to O’Rourke joining the Randwick yards of Michael Freedman as stable foreman.

“I spoke to him from the start about a four-year plan to end up training on my own and he said he would support that,” said O’Rourke. “But then he got an offer to train in Hong Kong.”

Freedman encouraged O’Rourke to take out a licence and take over his yard, inheriting many of his stars, including Group 1 runner-up Frolic. O’Rourke took the advice, and was a fully-fledged trainer by April 2017 with a yard of 20 quality horses.

“I came to Australia because I couldn’t see a future in Ireland,” he revealed. “There are a lot more opportunities in the game here, they are a lot more open to young people coming through.

“They are willing to give young people a go, they want the younger generations coming through, so trainers are happy to teach you.

“They want you there and want to support you, even if that means you moving on.”

The new season is just beginning for O’Rourke in Sydney, with his stable stars Frolic and Ringerdingding primed for new challenges, but there are also a new batch of two-year-olds that will be the focus this September.

He said: “We have some nice yearlings coming through, in particular a couple by Dawn Approach. They start here in trial races in September. It’s the same as schooling bumpers at home. They are every week and are televised for people to see.”

He added: “Australian racing is very open to the public. We’re always aiming to generate as much information as possible.”

There are negatives to training in Australia; the climate has extremes to deal with and O’Rourke finds the unsociable hours make finding quality staff a test.

He said: “We are close to the sea, so have a nice sea breeze every day. We wouldn’t get hit by the heat anywhere near as bad as they do inland. The humidity is the tough part, but it’s not too bad.

“The biggest thing is finding quality staff. We work tough hours, starting at 3.30-4am, with the track opening at 4am and closing at 8.30am. We have to have all the horses worked by then.”

It will be an exciting season for the Irishman come the winter when Frolic and Ringerdingding are in full swing. Having won a Group 2 and finished second in the Group 1 Golden Slipper as a juvenile, Frolic was caught out by a flurry of soft ground around Sydney last autumn. She still finished third in the Inglis 3yo Guineas.

O’Rourke is hoping she can build on that this term along with Ringerdingding.

He said: “Ringerdingding could be anything. He stepped up well to Group racing last year, getting a bit unlucky with draws, but he’s a really nice horse and we’re looking forward to him.”

If you enjoyed this, why not read: 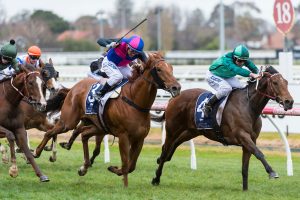 Up Next
Weekend global stakes round-up