Heartbreak City pours it on in Ebor romp
Stories

Washington-born Wesley Ward has exploited European shores in recent years with the likes of high-class sprinters Acapulco and Undrafted dominating top races at the Royal meeting.

The former American champion jockey unleashed his current star juvenile Lady Aurelia on Deauville’s straight course. Although workmanlike the two-year-old filly made no mistake in claiming her first Group 1 in the Darley Prix Morny over 6f.

As expected the daughter of Scat Daddy bounced out to the lead under Frankie Dettori, leading her four rivals while taking a fair hold. Dettori kicked on two furlongs out and gained a two-length advantage over the Clive Cox-trained Tis Marvellous who tracked the warm favourite.

Lady Aurelia was closed on in the final furlong by Sheikh Hamdam’s Alrahma and the Aidan O’Brien-trained Peace Envoy. The Ballydoyle charge ran on strongly towards the stands side but couldn’t quite get on terms with the leader who held on to score by three quarters of a length.

Despite not matching her win in the Queen Mary – where she stormed seven-lengths clear of her rivals in one of the most impressive Royal Ascot victories in history – Lady Aurelia now makes it three from three in her short career and tastes success at the highest level for the first time.

For Ward this triumph comes as his second in the Prix Morny following on from No Nay Never who ran out a ready winner in the 2013 renewal having taken an almost identical path to this year’s winner.

The two-pronged British and Irish challenge in the shape of Tis Marvellous and Peace Envoy couldn’t quite burst the bubble of the red-hot favourite. The latter made most of an impact finishing just under a length off the winner under Yorkshire Oaks-winning rider Colm O’Donoghue.

Darley Prix Jean Romanet
The fillies and mares took centre stage in the 1m 2f Prix Jean Romanet which has gone back across the channel in recent running’s, with the likes of Karl Burke’s Odeliz and the James Fanshawe-trained Ribbons proving successful in the race.

The pattern was to maintain itself this time around as Speedy Boarding showed a good turn of foot under Frederick Tylicki to run away with her first Group 1 by just under two-lengths.

The four-year-old daughter of Shamardal sports the colours of Helena Springfield, the very same black and white silks which were carried to success by Izzi Top in the 2012 renewal, herself handled by John Gosden.

The British and Irish fielded another three runners in the £105,000 contest with the Dave Simcock-trained Bateel fairing best of the rest, while favourite Bocca Baciata who served it up to Minding in the Pretty Polly Stakes two starts previous, failed to shine trailing the field in last.

Speedy Boarding’s win sees the honours go to back to Britain for a fifth time in the last ten years, with Newmarket-based Fanshawe scooping the prize for a second time. 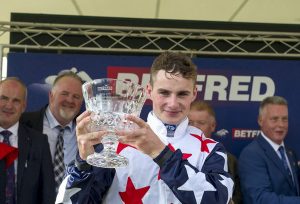 Up Next
Heartbreak City pours it on in Ebor romp