Renowned operation Ballylinch Stud was rewarded with an excellent result in the ring on Monday when Aunty Bridy made 410,000gns to a bid from Sam Haggas of Hurworth Bloodstock to top the first session of the Tattersalls December Mares Sale.

The two-year-old daughter of Camacho was successful on debut in a seven-furlong maiden at the Curragh in June for trainer Jim Bolger and was last seen finishing runner-up to Elysium in the Group 3 Weld Park Stakes in September.

There was plenty of interest in the filly with Michel Zerolo of Oceanic Bloodstock and Andreas Putsch involved from the early stages of bidding, but it was Haggas who had the final say.

Haggas said: “She’s for an established client and I should think the plan will be for her to stay here in the short-term before perhaps going to America. She’s a good-looking filly who has shown good form, and she’s by a prolific sire of fillies in Camacho. Hopefully there’s more to come.”

By the close of the session, Ballylinch had also sold Affected for 130,000gns to Plantation Stud, Kintra to Toudo LLC for 120,000gns and Golden Lips, who was bought for 50,000gns by Jean-Claude Serol. That took total receipts for the Irish operation on Monday to 710,000gns.

The session concluded on Monday evening with an appearance by Rekindling, who provided trainer Joseph O’Brien with a memorable success when capturing the 2017 Melbourne Cup. Catalogued as a horse out of training, the six-year-old was led out unsold at 95,000gns.

The Juddmonte draft at the December Mares Sale is renowned for offering a host of well-bred individuals and with a cover to the operation’s dual world champion Frankel, the unraced Calming Effect had plenty of appeal.

Out of the multiple Grade 1 heroine Emollient and by leading American sire War Front, Calming Effect’s family also includes the Grade 1-placed Hofburg and can trace its dynasty back to the influential Niarchos family of Coup De Genie and Machiavellian.

She was bought by Shingo Hashimoto, representative to Katsumi Yoshida’s Northern Farm, for 400,000gns and they will be hoping to capitalise on the success Frankel has already had in Japanese. The son of Galileo is responsible for the Grade 1 winners Soul Stirring and Mozu Ascot.

Hashimoto said: “We really liked her conformation, she is a very good-looking mare, and the Frankel covering is very attractive to us. She’s a very exciting addition to the farm.

“We don’t know yet who we will send her to – we have many good stallions to choose from!”

Prior to Calming Effect going into the ring, the Juddmonte draft also saw Mechanism, a Zamindar sister to Group 1 winner Timepiece, sell for 200,000gns to Gerrardstown Stud.

Offered in foal to Golden Horn, the mare has three foals on the ground including Escapement, a juvenile daughter of Invincible Spirit who is currently in training with Ralph Beckett.

In foal to Frankel, Calming Effect is out of multiple Gr.1 winner Emollient.#TattsDecember | #ノーザンファーム pic.twitter.com/6nqQCmz10e

Lamb strikes a match for Firelight

Bloodstock agent Jill Lamb was on the mark in the early hours of Monday’s session when she came out on top of a frenetic bidding battle for the Oasis Dream mare Firelight at 330,000gns.

A winner twice as a two-year-old as well as finishing fourth in the Lowther and Dick Poole Stakes, Firelight was offered in foal to exciting sire Almanzor and bought on behalf of Graham Smith-Bernal.

Smith–Bernal had enjoyed a good result at last week’s Tattersalls December Foal Sale when he sold a Sea The Stars colt to Sunderland Holding for 170,000gns.

Lamb said: “She’s a good-looking mare who was a good race filly and she’s in foal to a horse we like – I really liked the Almanzor yearlings, they’re good-looking solid types. I think it’s a very suitable covering.

“We already have an Oasis Dream mare who is out of a Galileo mare [Nadia Glory, dam of a Sea The Stars colt foal who made 170,000gns last week], and hopefully this one will do well too.”

Hayes buys back into successful family

Brendan Hayes of Knocktoran Stud returned to a family he knows all about as he bought the Godolphin-consigned Donnybrook for 240,000gns.

The Mayhem Syndicate bred Donnybrook out of the Group 3-winning and Group 1-placed dam Mayhem, who is herself out the Cozzene mare Hit The Sky, the dam of Prix Daniel Wildenstein hero Royal Bench and Group 3 winner Memphis Tennessee.

Hayes added: “She’s for my son Jonathan and hopefully she’ll be lucky. We’re very happy to be coming back to what we know. She’s very good looking and looked to have a bit of ability. We’ll look for something steady but fast to send her to.” 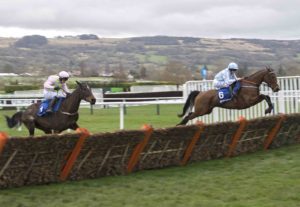 Up Next
Honeysuckle preserves unbeaten record at Fairyhouse