Change to be applied to Plus 10
Stories

It has been announced that Juddmonte Farms are agreeing to purchase a slot in the very first Pegasus World Cup, taking the spot from Coolmore in the process.

The result of this decision is likely to see Breeders’ Cup Classic hero Arrogate renew rivalry with California Chrome in a bid to take the $7 million first prize.

A son of Unbridled’s Song, the three-year-old ran down this year’s Dubai World Cup winner in the final half-furlong of the one mile and two furlong showpiece at Santa Anita last month.

The race will be California Chrome’s 27th and final in what has been a glittering career, which has included seven Grade 1 wins.

Under Mike Smith, the Breeders’ Cup meeting’s most successful jockey of all time, Arrogate was only having his sixth lifetime start that day.

With the front two way ahead of the remainder, he was to give his trainer Bob Baffert a third straight success in the Classic.

The first of its kind, the Pegasus World Cup Invitational will be run over nine furlongs and is restricted to 12 runners.

Surpassing the Dubai World Cup in terms of prize money, 12 owners have reserved a spot at the starting gate, each worth $1 million. Once acquired the owner has the option to either race, share, lease or sell their place in the gate.

“It is a great idea and anyone that comes up with an idea for a new race like this—and they’re trying to make something very, very positive happen in the racing industry in the month of January when usually nobody is talking about horse racing,” said Garrett O’Rourke, Manager at Juddmonte Farms in Kentucky.

He added: “It deserves at least consideration for as much support as we could give to it.

“All things being equal, we would definitely go because we just feel like this is something that obviously has a tremendous reward. It’s an idea that you would like to see being supported.”

Arrogate worked over seven furlongs at Santa Anita on Wednesday and Baffert confirmed his preparation towards the newest Flat race in the world, which will take place at Gulfstream Park on January 28. 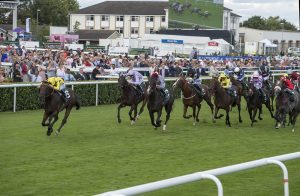 Up Next
Change to be applied to Plus 10