By The Owner Breeder staff 16 September 2012

Emulating the matchless juvenile record of his sire New Approach, Dawn Approach is now five wins for five runs after landing the Group 1 Vincent O’Brien National Stakes at the Curragh on Saturday evening. 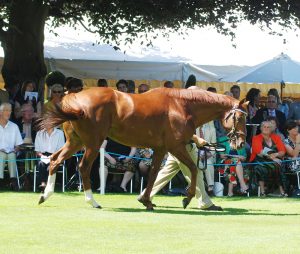 The similarity doesn’t end there, as he is also chesnut with a blaze like his sire and is trained by Jim Bolger, who has retained care of the exciting colt even after his sale to Godolphin following his win in the Group 2 Coventry Stakes at Royal Ascot.

While Sheikh Mohammed’s personal maroon-and-white silks are seen fairly often on Irish racecourses, it is the first time Godolphin’s royal blue colours have been carried by a horse not trained by the team’s appointed trainers, Saeed bin Suroor and Mahmood Al Zarooni. The latter saddled Encke to win the St Leger, spoiling Camelot’s Triple Crown bid and giving the Godolphin team double Group 1 success on Saturday.

While New Approach didn’t appear until the July of his two-year-old season and ended his unbeaten run with victory in the Group 1 Dewhurst Stakes in October, his son was out on the very first day of the Irish season – 25 March ¬ and duly became his sire’s first winner. He was part of a memorable stakes-winning treble for New Approach two-year-olds at Royal Ascot along with Tha’Ir and Newfangled, who was sadly put down after suffering an injury in the Lowther Stakes, her next start after her victory in the Albany Stakes.

Dawn Approach has it all to live up to next year, however, if he is to be truly his father’s son. New Approach, having twice been beaten by Henrythenavigator in the English and Irish 2,000 Guineas, went on to win the Derby and Irish Champion Stakes, and set a new track record when bowing out in fine style back at Newmarket in the Champion Stakes.

New Approach, who stands at Darley’s Dalham Hall Stud, now sits atop the European first-crop sires’ table, his progeny earnings from his seven winners standing at £327, 216. His old foe Henrythenavigator, at stud for Coolmore in Kentucky, also has seven winners and a Group 1 winner, Pedro The Great, who has contributed handsomely to his earnings of £251,079. 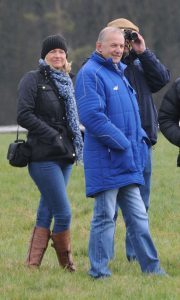 Up Next
Tinkler and Carmody flying high