Apple’s Jade more than lived up to her billing as the star act at the final day of the Goffs December National Hunt Sale when bought by Noel and Valerie Moran of Bective Stud for €530,000 on Thursday.

That price saw the 11-time Grade 1-winning hurdler, who was offered in foal to Walk In The Park, become the highest-priced National Hunt mare to sell at public auction. The previous record was held by Feathard Lady, who was purchased for 270,000gns at the Doncaster August Sale in 2007 by Graham Wylie.

It was Gordon Elliott, who had trained the daughter from 2016 until her final start earlier this year, who struck the winning bid on behalf of owner-breeders the Moran family.

Noel Moran said: “It will probably be an extremely long time before we ever see the likes off her in a sales ring again; she is an 11-time Grade 1 winner and mares like her are next to impossible to come across.

“We are delighted to get her, and the plan is to retain her progeny and race them.”

Elliott added: “She’s the mare of a lifetime, to win 11 Grade 1 races is just incredible. Noel and Valerie followed her career through, they have set up Bective stud for high-end broodmares, and she is top of the pops.

“Mares like her don’t come up for sale very often and I hope she is very lucky for them and breeds champions for them.”

Speaking after the December National Hunt Sale concluded, Goffs Group Chief Executive Henry Beeby said: “To hold the first thoroughbred sale in Ireland on its scheduled date since the outbreak of Covid-19 is noteworthy in itself.

“Like everyone in the country we have endured a truly torrid time and approached the sale with a degree of trepidation. Could we even conduct the sale and, if so, how would it measure up?

“We have been both relieved and delighted with the strength and depth of the two days which was good enough to feel ‘normal’. Indeed there has been fierce competition for the superb bunch of foals with which we were entrusted by our vendors and to end up with a set of figures were anywhere near last year’s excellent results, never mind ahead, is such a relief.

“And then there’s Apple’s Jade. We were truly honoured to be entrusted with her by Michael and Eddie O’Leary, and simply overjoyed that she lived up to her star billing. Her price of €530,000 obliterated the record for a National Hunt mare to ensure her appearance in the sales ring absolutely matched up to her racecourse reputation and we look forward to seeing her progeny carry on her mighty legacy.” 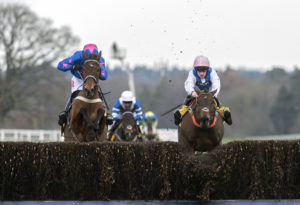 Up Next
The Finish Line with Brian Hughes