Trio off the mark in freshman race
Stories

The appeal by Bruce McHugh against the ruling which upheld the ban on artificial insemination (AI) for Australian thoroughbred breeding has been dismissed by the Full Federal Court in Sydney.

A former Chairman of the Sydney Turf Club, McHugh initiated legal proceedings against the Australian Jockey Club (AJC) challenging the prohibition of AI, which has been in place in the country since 1949. As in other racing nations, only thoroughbreds resulting from natural conception can be registered with the Australian Stud Book.

The AJC was joined by five other respondents when the case was heard in court from August 2011, with the Australian Racing Board (ARB), Victoria Racing Club (VRC), Thoroughbred Breeders Australia (TBAus), Australian Stud Book and the country’s equivalent of Weatherbys, Racing Information Services Australia, teaming up to defend McHugh’s claims of restraint of trade. After a year-long deliberation by Justice Tony Robertson, McHugh’s case was eventually dismissed in December 2012, sparking his subsequent appeal.

ARB Chairman John Messara welcomed the outcome of the appeal, which was unanimously rejected by a panel of three judges, saying: “A great deal of industry time and financial resources have been spent over the past five years in defending this matter.

“The issue of artificial insemination is settled once and for all. We have said from the outset that our sport was not anti-competitive or a restraint of trade as proponents of AI are perfectly free to establish their own industry. Fortunately the Federal Court agreed with us.”

Messara, the owner of Arrowfield Stud in Australia’s Hunter Valley, added: “Racing and breeding has many challenges now and into the future and the finality of this case will allow to concentrate fully on what matters most to participants, punters and stakeholders.”

Trevor Lobb, President of the Australian TBA, hailed the decision as “wonderful.”

He said: “I just wish to thank the support of all breeders here in Australia and overseas that understood the importance of fighting this with all our being to remain an international recognised and accepted country in this great sport.” 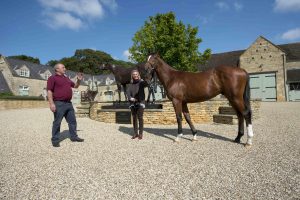 Up Next
Trio off the mark in freshman race