Anthony Stroud strikes at £675,000 for Medaglia d’Oro colt at Arqana

Agent signs on behalf of Godolphin at relocated breeze-up sale

Andre Fabre will train Godolphin’s latest purchase, a Medaglia d’Oro two-year-old colt, after Anthony Stroud went to £675,000 to secure the exciting individual at the Arqana Breeze-Up Sale which was held at Doncaster on Friday.

Staged for the second year in a row at the Goffs UK sales complex due to Covid-19 restrictions in France, the colt was the headline act of the one-day sale and provided his consignor Malcolm Bastard with an excellent return on the $175,000 he paid for him as a youngster.

It was easy to see why Godolphin moved to secure the two-year-old given he is a son of Daley America’s renowned stallion Medaglia d’Oro, the sire of the likes of Talismanic, Astern, Songbird and Elate.

Speaking after signing the docket, Stroud said: “Obviously he’s by a Darley stallion and he did a very nice breeze. Malcolm Bastard does such a fantastic job with these horses – he brings them on very well. We decided this is the one we wanted to have a go on.”

Bastard, who had unearthed the colt at last year’s Fasig-Tipton Kentucky October Sale, added: “He’s a fantastic horse. He has a superb temperament.

“I don’t get excited, I get realistic, as these horses have to go on and win but there’s a lot of improvement in him to come. The sale being put back a little bit has helped him as he’s immature.”

Towards the end of trade, long-time breeze-up consignors John Cullinan and Roger Marley of Church Farm and Horse Park Stud were left in disbelief after their Ribchester filly was bought by Richard Brown of Blandford Bloodstock for £590,000.

Cullinan and Marley had paid just £45,000 for the filly, a half-sister to the Listed-placed Expensive Date, at the Goffs UK Premier Yearling Sale.

“She was always a special filly from day one,” said Cullinan. “When we bought her, we thought that she might be a sharper type, but she grew and she stretched. She has a great attitude; she’s been a pleasure to have in the yard.

“We thought she would sell well as she was well liked. But did I have any idea that she would make that? Of course not!

“I’m delighted Richard Brown bought her – he bought [recent Marygate Stakes winner] Nymphadora off us too and she looks like she’s a decent one.”

Offered by @StablesFarm, lot 1⃣4⃣7⃣ is purchased by Richard Brown (@BlandfordBldstk) for £590,000 at the Breeze Up Sale. She is a half-sister by first crop season sire #Ribchester (@DarleyEurope) to Stakes-placed EXPENSIVE DATE, from the family of MUARRAB & BUNGLE INTHEJUNGLE. pic.twitter.com/Eej2OdHVVE

Another to hit the six-figure mark was Yeomanstown Stud’s Night Of Thunder filly who went the way of Stuart Boman of Blandford Bloodstock for £500,000.

Boman said: “She’s for Mr Sartori [owner of Wednesday’s Prix Corrida third No Limit Credit] and will be trained by Andreas Suborics.

“She did an outstanding breeze – she was very natural and was able to maintain her speed right the way through. Yeomanstown don’t breeze with the clock in mind so when you factor that in, it was very impressive.

“There are very few fillies here and she’s an outstanding physical – I don’t know where everyone was last October!”

Earlier in Friday’s session, trade was led by a Kingman half-brother to German Oaks winner Miss Yoda, who went the way of Arqana’s Freddy Powell, acting on behalf of Singapore owner Kuldeep Singh, at £500,000.

Powell said: “He’s been bought by a new owner from Singapore called Kuldeep Singh. I’m not sure where the horse will be trained yet, I need to call him back for all the details. He’s a lovely horse who galloped really well so the owner was really keen to have him.”

He was offered by Brendan Holland’s Grove Stud, which had a productive few minutes, as prior to the Kingman colt he watched his No Nay Never Colt out of the Zoffany mare Mona Vale go to Alex Elliott and Jamie McCalmont for £300,000.

Holland said: “The only problem is it’s all downhill from here! I was hoping they’d sell well and it just so happened they were two exceptionally nice horses being sold back-to-back.

“Both of them are by exciting young sires and breezed exceptionally well. You’re always hopeful when you know they can run but it still has to happen on the day and thankfully it worked out great.

“This is a very international sale now and even though there isn’t as strong an attendance as you need, overseas owners still have people working here.”

“I used to work for Jamie when I first came back to England from the States and it’s nice to link up together and buy a horse. Partnerships are becoming more and more common; it limits people’s risk and if people are prepared to do it, it gives you a great advantage to buy a horse because you can pool your funds.

“We’re very excited by the new partnership; we looked at buying in America at the Fasig-Tipton Midlantic Sale, but we didn’t get anything.

“Being so close to Royal Ascot is not ideal, but I would just like to commend Arqana and Goffs for getting the whole thing going.”

As the only lot catalogued by Darley’s flagship Dubawi, it was no surprise to see Oak Tree Farm’s colt attract plenty of interest, being from the family of Group 1 winner Albanova.

Picked up by Norman Williamson and partners for €110,000 as a yearling at last year’s Goffs Orby Sale, it was Oliver St Lawrence who went to £480,000 to secure the colt out of the Listed winner All At Sea, on behalf of Fawzi Nass.

St Lawrence said: “I looked up my yearling notes and he was a backward yearling, and I was pleasantly surprised with how well he had done over the winter. Norman has done a very good job with him.

“He’s a nice type but still a bit of a baby so we’ll give him some time and go from there.”

_ @OStLawrence goes to £480,000 to buy lot 1⃣3⃣0⃣, a colt by #Dubawi (@DarleyEurope) out of Stakes winner ALL AT SEA, from the family of dual Gr.1 winner ALBANOVA. Consigned by Oak Tree Farm, he will run for Fawzi Nass. pic.twitter.com/zXJQxZmuBE

Arqana’s Freddy Powell said: “It shows that the catalogue was so strong that it has been appreciated worldwide. We’ve had people bidding from all over. All things considered we have to be satisfied.

“The median is close to €100,000 which is incredible from that number of horses. I think it shows the depth of the catalogue. The vendors have been amazing to adapt again – we had to change the date and change the venue – and when you have horses of that value, for things to change all the time is not easy when you are preparing them for a breeze.

“That is why we had to make our decision early. But today has been very satisfying, especially the clearance rate, and we have had the highest median ever as well as record aggregate.” 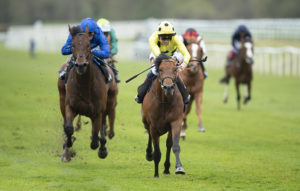