While it is disappointing that there is a small field for today’s King George VI and Queen Elizabeth Stakes, wondermare Enable will attempt to become the first horse to win the Group 1 on three occasions.

Khalid Abdullah’s homebred first struck in the 2017 edition of the race, defeating Ulysses by four and a half lengths, and her second success came last year in a nail-biting finish when she got the better of Crystal Ocean by a neck.

Enable made her first start of the year at Sandown in the Group 1 Coral-Eclipse, finishing second to Godolphin’s Ghaiyyath, a performance that her trainer John Gosden feels she is entitled to improve from.

Speaking to QIPCO British Champion Series, Gosden said: “I did try and tell people very clearly beforehand that she was not at 100 per cent; she tired in the last furlong but we were delighted with her run.

“She’s always been mentally hardened but what’s changed, with age, is her metabolism. Consequently, she never gained that tightness of the muscle like she normally would, it took her a lot longer. She’s a six-year-old racemare and not that wild, exuberant three-year-old race filly who could just do anything.

“I didn’t want to push her hard for the Eclipse. She knows what she wants to do: she’s very positive and a wonderful filly to train in that she is determined to do everything. So I just went with her. I wasn’t going to start pushing her and telling her what to do.

“The race has put her right and her work has been perfect on the Limekilns since. She’s been working with just one other horse, and I’ve let her lead a couple of works to just enjoy that for a change. She comes into this race in very good order.”

Facing Enable today are the Aidan O’Brien-trained Japan and Sovereign.

Away from Ascot, there’s an exciting clash on the Knavesmire in the Group 2 York Stakes as Elarqam bids to strike in the extended 1m2f contest for the second successive year.

The five-year-old son of Dubawi will be up against the Hughie Morrison-trained Telecaster, who got back to winning ways when landing the Group 3 La Coupe at Longchamp last month.

King Of Comedy, second to Century Dream in the Group 3 Diomed Stakes, Fox Champion, Regal Reality, Aspetar and Lord Glitters are also in the field.

There are Flat meetings at Doncaster, Gowran Park and Newmarket today while Tramore hold a jumps fixture. 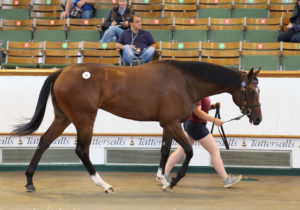