Alcohol Free to be offered at Tattersalls in December

By The Owner Breeder staff 01 September 2022

The outstanding four-time Group 1-winning race filly Alcohol Free is to be offered at the Tattersalls December Mares Sale, which takes place in Newmarket from November 28 to December 1. She will be offered for sale in the new Sceptre Session on Tuesday November 29 and promises to be amongst the highlights of the 2022 global bloodstock sales calendar.

Owned by Jeff Smith, Alcohol Free is the outstanding filly of her generation having won four Group 1 contests to date; the Group 1 Cheveley Park Stakes as a two-year-old, the Group 1 Sussex Stakes and Group 1 Coronation Stakes as a three-year-old and the recent Group 1 July Cup at the age of four.

From the third crop of No Nay Never, the Andrew Balding-trained Alcohol Free ended her two-year-old year as the equal highest-rated UK-trained two-year-old filly having won the Group 1 Cheveley Park Stakes on only her third start. Following two further spectacular Group 1 wins in the Coronation Stakes at Royal Ascot and the Sussex Stakes at Goodwood, where she beat 2,000 Guineas winner Poetic Flare, Alcohol Free was officially the best British trained three-year-old filly of 2021 with a rating of 119. Alcohol Free’s four-year-old career to date has seen her maintain her rating of 119 after her memorable win over 6f in the Group 1 July Cup, followed by a third place finish in the Group 1 Sussex Stakes.

Tattersalls Chairman Edmond Mahony said; “It is an honour to be asked to offer Alcohol Free for sale at the Tattersalls December Sale on behalf of Jeff Smith. Jeff has been the most wonderful supporter of British racing and breeding for so many years and Alcohol Free is yet another outstanding performer to carry his famous colours following in the illustrious footsteps of some great champions including Arabian Queen, Chief Singer, Lochsong and Persian Punch. Four-time Group 1-winning race fillies rarely appear at public auction and Alcohol Free is a rare jewel to grace our inaugural Sceptre Sessions at the Tattersalls December Sale.” 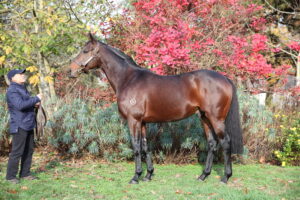