Twenty-four hours after springing an upset on Prosperous Voyage in the Group 1 Falmouth Stakes, jockey Rob Hornby was again the toast of Newmarket after partnering Alcohol Free to a decisive success in the Group 1 Darley July Cup on Saturday.

Racing in the famous silks of owner Jeff Smith and trained by Andrew Balding, Alcohol Free was out to prove her sprinting prowess after recording two top-level triumphs over a mile last year, having also claimed the Cheveley Park Stakes as a juvenile.

Hornby settled the daughter of No Nay Never in midfield as Naval Crown led the far side group under James Doyle, tracked by Emaraaty Ana, while Twilight Jet spearheaded the runners on the nearside.

Alcohol Free made good headway with a quarter of a mile to run, edging ahead of Naval Crown at the furlong-marker and though she drifted left towards the far rail, it didn’t stop her momentum as she galloped on powerfully to record her fourth Group 1 strike.

Naval Crown was a length and a half away in second with Australian raider Artorius running on well from the back of the field to claim third. 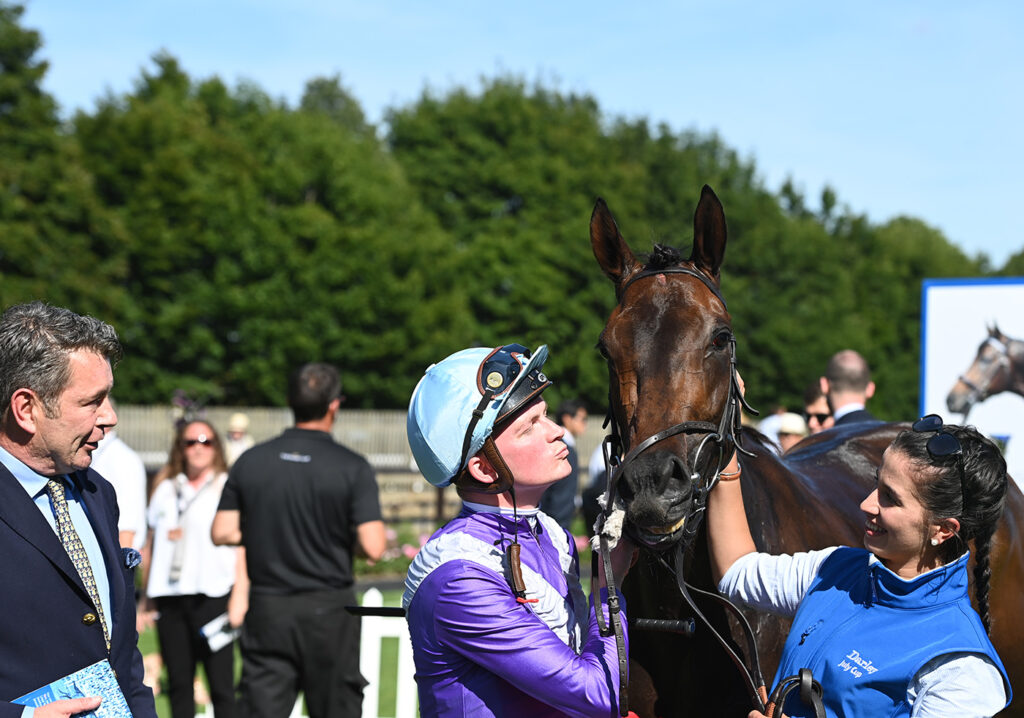 Balding said: “We’re absolutely over the moon and she’s now won four Group 1s – one at two, two at three and one at four – which is a very unusual feat and they’re not mickey mouse Group 1 races either. They’re proper races and we’re very proud of her and I’m just delighted for the whole team and Rob Hornby and Jeff as well. It’s a special day.

“We needed to run somewhere between [Ascot and Goodwood] really. The Sussex Stakes has always been her main target having won the race last year and we were just trying to find the best plan to get her there.

“We felt that she showed enough back to sprinting last time to be competitive in the July Cup and she certainly was. She’s a very talented filly and this is her time of year as well, she’s twice the horse she was in the spring and it’s just lovely to have her back on song.

“I do think she’ll go to the Sussex Stakes next as it has always been the plan. She won it last year and the test of the mile there suits her really well. She’s obviously a speed miler rather than an attritional miler, so Goodwood should suit her really well and we look forward to it.

“We’ve had a frustrating season and have had more seconds than you could care to wish for, so moments like this makes up for everything.”

Earlier on the card, Isaac Shelby confirmed himself a colt of enormous talent with a gutsy success in the Group 2 Superlative Stakes (7f).

Sean Levey had to be at his strongest as the Brian Meehan-trained juvenile defeated favourite Victory Dance by a head for owner Manton Thoroughbreds VII in the famous Robert Sangster silks.

Meehan said: “He’s very nice. You’re always tempted to make predictions, but he really is the business, he looks really special and could even be a Guineas horse. He’s got a good temperament and Sean knows him well so they’re a good package.

“We’d stay at seven now, which I think is ideal, but we won’t be in any hurry. I think we’d train him as a Guineas horse now. These horses are special and they’re the reason you do it. You get the most enjoyment out of training winners of course, but when you get horses like him with serious potential it’s exciting.

“I’m so pleased for Sam [Sangster], we do a lot together. He buys horses for me and my clients as a bloodstock agent and he runs these partnerships as well. It keeps the colours alive, which is really cool, he’s a great guy and I can’t thank him enough for his support.

“I don’t know if we’ll run again [before the Darley Dewhurst Stakes on the Rowley Mile in October], we’ll get him back and sit round the table and make a little plan after a week or so. Goodwood would come too soon, but the Champagne Stakes [at Doncaster in September] is a race I’ve thought about. I love the Breeders’ Cup, so the Juvenile Turf is one we’ll definitely factor into our thoughts as well.”

The David Simcock-trained Bless Him showed himself to be no back number at the age of eight with a decisive success in the Bunbury Cup (7f). Under an excellent Jamie Spencer ride, Bless Him surged home from the back of the field to score by a length and quarter from Ropey Guest for owners Tony Perkins & Partners. 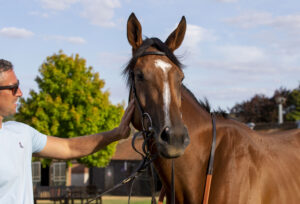 Up Next
Records across-the-board at memorable Tatts July Sale