Newbury Racecourse has been given a huge boost with the news that Al Shaqab Racing will be sponsoring Lockinge day in May 2015, which will see a 125% increase in prize-money available.

The feature race itself, the Group 1 Al Shaqab Lockinge Stakes, which was this year won by Sheikh Joaan Al Thani’s Olympic Glory, will be worth a total of £350,000, a 64% improvement from its previous pot of £214,000.

“Al Shaqab Racing is delighted to be sponsoring such a prestigious raceday which includes a race very close to our hearts, the Al Shaqab Lockinge Stakes,” said the operation’s racing advisor Harry Herbert.

“It is very appropriate as we won the race last year with Olympic Glory and in doing so kick-started the Jack Berry House fundraising campaign which has raised a staggering £500,000 for this fantastic cause.”

Confirming that previous sponsors on Lockinge day – JLT, Betfred, Bathwick Tyres and Swettenham Stud – have stepped aside to allow Al Shaqab to support the entire seven-race card, Julian Thick, CEO of Newbury Racecourse, added: “The Al Shaqab Lockinge Stakes is a hugely important race in the European calendar and we are delighted that, with the backing of Al Shaqab, we can elevate the race and the whole of Al Shaqab Lockinge Day to new heights. Our thanks go to Al Shaqab for supporting our ambition. We are hugely excited about the possibilities for this fixture in 2015 and beyond.” 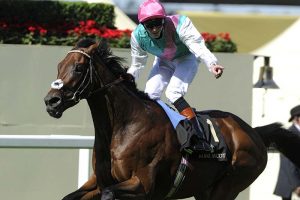 Up Next
Kingman named Cartier Horse of the Year