Al Kazeem back to best in Tattersalls

John Deer’s homebred Al Kazeem has made eight appearances on the racecourse since time was called on his lacklustre stud career but Sunday’s victory in the Tattersalls Gold Cup will have been the most satisfying of all.

In those eight runs, he has now added three further Group victories to his illustrious race record but to have been able to score again at the highest level in the race he won in 2013 is proof of the fact that the seven-year-old son of Dubawi is back to his very best.

Two years ago, his Tattersalls Gold Cup victory started a hat-trick of Group 1 wins, with the Prince Of Wales’s Stakes and Eclipse Stakes completing the trio. Those two contests are very much back in the picture again this season after Al Kazeem battled home by a neck from the fast-finishing Fascinating Rock, with early leader Postponed taking third and The Grey Gatsby a length and a half further back in fourth at the Curragh.

His delighted trainer said after the race: “Al Kazeem is amazing, looks amazing, is brave and all you need in a good racehorse.

“I’m lucky to have one as good as him and to have him back from stud. I’d say it’s my proudest moment. As long as he’s enjoying himself he’ll keep going, and one day I’m sure he’ll go back to stud.”

Al Kazeem proved to be subfertile during his stint at the Royal Studs but did manage to get around 25 mares in foal. His foals now on the ground include a half-sister to Philippa Cooper’s Irish St Leger winner Duncan and a three-parts brother to Group 3 winner Perfect Tribute, bred by Bridget Drew. 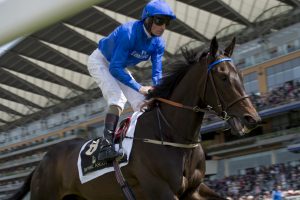