The master of Ballydoyle has thrown a handful of high-class fillies at the Group 1 Falmouth Stakes during the past decade, including the likes of Maybe and Lillie Langtry, but without success.

This was all to change on day two of Nemarket’s July meeting as Aidan O’Brien’s three-year-old filly Alice Springs, the subject of significant late market support dominated the field in this year’s renewal.

At a meeting where racing close to the pace has proved beneficial, Ryan Moore settled his filly in a handy third just in behind the leaders. The seven runners were taken along by one of three Godolphin representatives Very Special, while the Andre Fabre-trained Usherette, was held up towards the rear under Mickael Barzalona.

As the tempo increased going into the final three furlongs, Moore switched his mount out and sent her for home in the final furlong and a half. She readily asserted to score by just over two lengths with the likes of warm favourite Usherette unable to land a blow from the rear.

Even though the filly may not be at the top of the pecking order amongst her generation at Coolmore – with arguably Minding and Ballydoyle ahead of her – the daughter of Galileo has run a series of creditable efforts at the highest level without winning, including most recently in the Coronation Stakes behind Qemah after not enjoying the best of passages.

Her victory breaks a rotten curse in the race for Irish fillies, in a race which has either gone to Britain or France, and in doing so shattered the 18-year-old course record.

For Moore, this success makes it a ninth Group 1 victory this year, which all started back in January with Sun Jewellery in the Hong Kong Classic Mile. He will no doubt be hoping for another win at the highest level tomorrow as Air Force Blue looks to make amends returned to sprinting in the July Cup.

“Aidan said he felt that she’s improving,” reflected Moore. “She’s a big girl and she’s had a busy year but she’s kept coming forward all the time and it was a very good performance.”

O’Brien’s strength among his three-year-old fillies is at its highest for many years and returned to a sounder surface, the filly has seemingly progressed again. The triumph caps off a third success of the meeting so far for the stable who can now look forward to targeting Alice Springs to big targets over a mile or further in the coming months.

Kevin Buckley, Ballydoyle’s UK representative said: “The filly had the ground and admittedly there was a tail wind but she deserved that.

“She has been the bridesmaid a couple of times and I think we’ll see further improvement from her. There’s lots of options for her at the end of the month and into August.”

The days Group action began with the Duchess of Cambridge Stakes for two-year-old fillies and saw O’Brien claim his second win in the contest with Roly Poly, after You’resothrilling was ridden to success under Mick Kinane back in 2007.

The daughter of War Front was encountering firm ground for the first time in her short career and was never too far off the early pace under Moore.

With four fillies in contention within the final furlong, Roly Poly stuck her neck out in the run to the line to win the Group 2 prize by half-a-length from fellow Irish challenger Magical Fire. 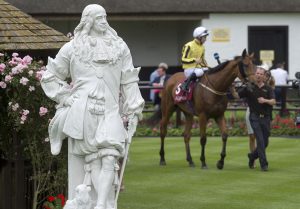 Up Next
Bell enjoys sweet taste of Orange deja-vu