There is little doubt that Australia has been the star three-year-old this season among the Ballydoyle battalions, but Adelaide – named after the capital city of the state of South Australia – staked his claim to be regarded as the stable’s second-in-command by landing an historic victory in the MVRC W. S. Cox Plate, generally regarded as the weight-for-age championship of Australasia.

European challenges for the Cox Plate have not been as plentiful as the raids on the Melbourne Cup, but even so some good horses had previously tried and failed to become a first European-trained winner of this championship race, run each year around Moonee Valley’s tight circuit in the Melbourne suburbs 10 days before the Melbourne Cup.

Several European-bred horses have taken the prize in the past, but Adelaide now ranks as the first European-trained winner, having benefited from a typically sound ride from Ryan Moore to catch last season’s Caulfield Cup winner Fawkner in the dying strides to win by a neck. In a blanket finish, the English-trained Side Glance – a Group 1 winner at Flemington during last year’s Melbourne Spring Carnival – ran very well to finish a close fourth.

Adelaide, yet another Group 1 winner for his sire Galileo, will now remain in Australia and should have a very bright future there. He has the potential to add further chapters to the success story of the Ingham family, who have raced so many top-class horses Down Under in recent decades and who previously owned Woodlands Stud prior to selling the famous property, plus all its horses, to Sheikh Mohammed six years ago.

Adelaide, formerly owned 100% by the Coolmore syndicate, is now part-owned by a group of Australians including John Ingham, who recalled being at Moonee Valley in 1995 when his father’s great horse Octagonal landed a thrilling Cox Plate victory, nosing out Mahogany in an epic battle up the short straight. No doubt Ingham’s confidence in the run-up to Saturday’s event was bolstered by the victory in the second race on the card of Eight Bills, a nine-year-old gelding by Octagonal (who overall has proved a disappointing stallion, notwithstanding that his first crop included Lonhro, who emulated his father by carrying the cerise Ingham silks to a swag of Group 1 victories and who now ranks as one of the stars of the Darley roster). 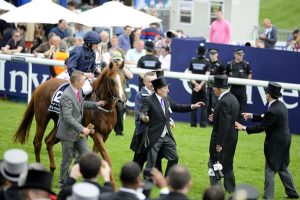 Up Next
Two Derby winners retire to Coolmore for 2015