Adayar stamps his class in the King George

Godolphin’s Adayar followed up his Derby victory at Epsom with an emphatic success in the King George VI and Queen Elizabeth Stakes at Ascot on Saturday.

With Wonderful Tonight withdrawn on account of the fast ground, five runners went to post for the mile and a half Group 1 contest, the market headed by the Aidan O’Brien-trained filly Love, winner of the Prince of Wales’s Stakes at Royal Ascot last month.

It was Love’s stablemate, Broome, that soon assumed front-running duties despite missing the break, his rider Wayne Lordan moving him around the field on the outside to set the pace on the rail as Adayar and Lone Eagle raced alongside each other in second and third, just ahead of Love and Mishriff, switched off at the back of the field by David Egan.

Broome was asked to quicken the tempo approaching the turn for home while Adayar, a little keen in the early stages under William Buick, raced in a clear second and made his move for glory rounding Swinley Bottom.

Adayar took the lead approaching the two-furlong marker as Mishriff threw down his challenge on the outside, in the process closing the door on Love, who had to be switched to chase down the leading duo, as Broome dropped back and Lone Eagle struggled to pick up.

For a few strides it looked like the older horse might pass Adayar but the son of Frankel proved resolute under Buick’s drive, galloping on strongly to see off Mishriff while Love could only stay on at the same pace behind the colts.

Adayar crossed the line a length and three quarters clear of Mishriff, with the same margin back to Love in third, who in turn was six lengths clear of Broome. He became the first Derby winner to capture the King George since his grand-sire, the late Galileo, achieved the feat in 2001. 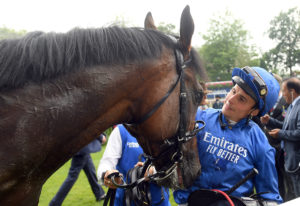 Buick said after the race: “Sheikh Mohammed has given me the opportunity to work for Godolphin and ride these horses. I’ll be forever grateful for that.

“Charlie [Appleby] is having a fantastic season and I’m the lucky boy who is riding these horses. [Choosing between him and Hurricane Lane] it’s a nice problem to have. We’re blessed to have these horses. This is what I dreamt of when I was a young boy.”

Trainer Charlie Appleby was unable to travel to Ascot on Saturday after being ‘pinged’, having to isolate at home while his staff performed their raceday duties. Appleby also has Irish Derby and Grand Prix de Paris victor Hurricane Lane in his three-year-old squad, the pair candidates for all the big middle-distance races later in the year.

Earlier on the Ascot card, the Ismail Mohammed-trained Zain Claudette flew home under Ray Dawson to chin Desert Dreamer on the line in the Group 3 Princess Margaret Keeneland Stakes (6f) while the team behind Adayar enjoyed the success of two-year-old New Science in the opening Listed Pat Eddery Stakes (7f).

At York on Saturday, King Power Racing’s Bangkok returned to winning ways in the Group 2 Sky Bet York Stakes (1m2f56y). Favourite Mohaafeth and Juan Elcano, both winners at Royal Ascot, threw down strong challenges inside the final furlong but it was the Andrew Balding-trained five-year-old who gained the day by a head under David Probert. 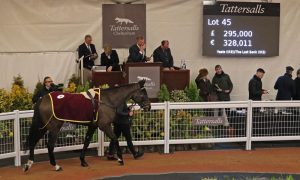 Up Next
Tattersalls Cheltenham to return to Prestbury Park