Arqana President Eric Hoyeau paid tribute to the adaptability of buyers in their willingness to shift to online trading as he reflected on a buoyant February Sale in Deauville on Tuesday.

Three horses realised six figures led by the promising jumper Hardi Du Mesnil, who was bought to join the string of owner Robert Waley-Cohen on a bid of €250,000 from David Powell of Highflyer Bloodstock during Monday’s session.

“We’re extremely pleased with this first sale of the season,” said Hoyeau. “The market showed itself to be dynamic throughout the two days, and aside from the final figures, there was also a real atmosphere.

“These results are very encouraging at this stage in the year, when the entries for the yearling sales are taking place and we’re putting together the Breeze-Up catalogue. All the racing countries of Europe were represented with both buyers and vendors.

“The bidding online also worked very well. There has been real progression in the activity online since the Autumn. We have adapted it as we have evolved. This has borne its fruit and should continue to progress.”

Tuesday’s session was headed by the sale of the Frankel mare Princess Isla to agent Anne-Sophie Yoh of YOHEA for €110,000. Offered by Haras des Rouges Terres, the winning five-year-old is in foal to Ten Sovereigns and out of the Group 2-placed Peinture Abstraite, a half-sister to champion Peintre Celebre.

“I have bought her for Xavier Marie of Haras de Hus,” said Yoh. “He’s a new owner that is well-known for investing in sports horses and is now turning towards racing.

“We really liked the mare’s pedigree and she is the only one in foal to the sire in the catalogue. We’re very happy. We don’t know yet who she’ll be covered by next – she’ll go to the stud first.”

“She’s a lovely mare from a nice family of sprinters that were very tough on the racetrack,” said Vidal. “She’ll go to Le Havre.” 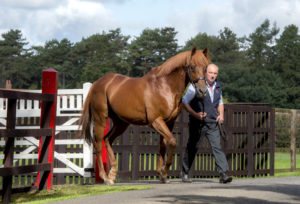 Up Next
Outstanding stallion Pivotal retired from covering duties aged 28