‘The name Prince Khalid and Juddmonte is etched in stone’
Stories

The bloodstock world is a small place, a notion that was further underlined at Tuesday’s instalment of the Magic Millions Gold Coast Yearling Sale in Australia, where a British-bred son of Juddmonte’s Kingman stole the show at A$1.8 million.

One of four seven-figure lots of the day, the colt was offered by Segenhoe Stud on behalf of breeder John Camilleri of Fairway Thoroughbreds and fell in favour of Coolmore’s Tom Magnier following a bidding duel with James Harron.

The 12-year-old Florentina has also made a bright start at stud as dam of the Group 2-placed Villa Carlotta and Listed-placed Fasano among three winners.

“Segenhoe always have incredible horses at this sale,” a delighted Tom Magnier said. “John Camilleri can certainly breed a horse – when you see the Fairway brand you have to take them seriously. He’s a lovely individual and we know how well Kingman is going at the moment – all the boxes were ticked for us.

“We are delighted to be able to get him and he will go to Chris Waller – all of the (Coolmore) guys liked him, so fingers crossed,”

Kingman, who stands at Banstead Manor Stud in Newmarket, has had four runners in Australia for three winners.

“John sent the mare up to England to go to Kingman and this guy was born there and came back with her,” said Peter O’Brien of Segenhoe Stud. “It was a big play, but John’s been rewarded today.

“We knew he was really popular, all the right people were on him. The reserve was a lot lower, we put him on the market early and he’s gone to a home of champions at Coolmore and he’ll get every chance.”

“It was another fantastic day’s trade,” Magic Millions Managing Director Barry Bowditch said. “It followed on from yesterday – there’s a lot of confidence in the market. The vendors are meeting the market and the buyers are feeding off each other – to have the figures we have is great and for the clearance rate to be around 88% at this stage of the sale is extraordinary.”

Harron had better luck in his pursuit of a colt by Al Shaqab shuttler Shalaa, for whom he paid A$1,150,000 out of the Arrowfield Stud draft. A big result for his young sire, whose first Australian runners include Group 3 winner Shaquero, the colt is the second foal out of Group 3 winner Honesty Prevails, a daughter of Redoute’s Choice whose first, a colt by Deep Impact, topped the 2020 renewal of the sale at A$1.9 million.

Plans call for the colt to join trainers Anthony and Sam Freedman.

SOLD!
Lot 332 for $1 million!
The Zoustar colt is from group winner Fuddle Dee Duddle and was offered by @widdenstud. pic.twitter.com/TTQ3of1oC5

So far, the pair have accounted for A$5,235,000 worth of stock to lead all buyers. They include the purchase of a Not A Single Doubt colt out of the Group 1-placed Denmagic for A$1,100,000 from Torryburn Stud.

Fung and Phoenix also paid A$600,000 apiece for a pair of colts by champion sire Snitzel.

The day’s quartet of million dollar lots was completed by a son of Tweenhills shuttler Zoustar, who made A$1,000,000 to the buying partnership of Victorian Alliance, Suman Hedge Bloodstock and David Redvers Bloodstock. The colt is the fifth foal out of Group 3 winner Fuddle Dee Duddle, a Red Ransom half-sister to the Group 1-placed Hallowell Belle.

The transaction continued an excellent sale for his consignor Widden Stud, so far the vendor of A$6,830,000 worth of stock led by Tuesday’s A$1.9 million son of Snitzel.

Godolphin made a single purchase, going to A$900,000 for a daughter of I Am Invincible from Segenhoe Stud. The filly is the second foal out of Group 3 winner Eloping, by Choisir.

Among the shuttlers, Haras d’Etreham’s Almanzor enjoyed another good sale on Tuesday courtesy of a filly descending from Watership Down Stud’s Crystal Spray family who made A$380,000 to Kelly Schweida Racing. Her sale followed a day after that of a colt for A$340,000.

Churchill was represented by a colt who sold for A$250,000 to Anthony Freedman Racing and Blue Sky Bloodstock while Caravaggio’s draft is led by a colt who made A$170,000 to trainer Ciaron Maher.

Frankel’s quartet through the ring includes a filly out of the Irish-bred Ghadaayer, by Shamardal, who sold for A$240,000 to Moody Racing. 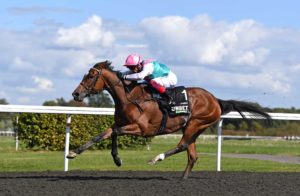