Where are all the women in racing?
Stories

A woman for all seasons

Having represented Ireland at Three Day Eventing at European, world and Olympic level before embarking on a training career, can you say what the change in your equine discipline has taught you?

Patience and waiting for horses to come to themselves. Eventers go on competing well into their teens as long as the people concerned don’t do too much too soon with them. With National Hunt horses, if one can give them a bit more time it can be beneficial, but time is not a thing some owners understand.

Eventers can go on until they are 14, 15, 16, while a lot of racehorses don’t, in some cases because they’ve done too much too soon. I am just wondering if we are getting at these big National Hunt four-year-olds too soon, expecting too much of them early in their careers.

You started training jumpers with considerable success, and still do. So what made you turn your hand to the Flat?

We always had one or two Flat or dual-purpose horses. Then I got one or two more just before the recession and found I could keep my staff all the year round with two lots of different horses. Also some owners prefer to have a Flat horse because they know where they stand after a year, instead of buying a three-year-old at the Derby sale and two years later being told, “Sorry, this is no good”. I always enjoyed the Flat and I’m used to working all the year round.

What do you see as the major differences between handling jumpers and Flat horses and which gives you the most pleasure?

A two-year-old is very exciting because it all happens so quickly when you consider how young they are. Your three-mile chaser is the one you’ve nurtured, had patience with and hope you haven’t done too much when it was young. The fun with the two-year-old is the fact that you picked it as a yearling and it comes good.

It is equally satisfying when you manage to nurture a horse through from an unbroken three-year-old to an eight-year-old winning a high-class three-mile chase. Anything that wins is what I like.

Your late husband Johnny, who bought your champion two-mile chaser Moscow Flyer for just 17,000 guineas, had a great eye for a horse and you must miss his input enormously. What has to be top of your list when buying a horse, for jumps or the Flat?

Johnny taught me an awful lot. I am a bad judge of a foal; I cannot envisage a fluffy lump of four legs, a head and tail turning into a yearling. Johnny was a very good judge of a foal, whereas I was a better judge of a yearling. We both had the same ideas but also our differences. Yes, of course I miss Johnny’s input, which was so good.

The first thing I look for in a horse is balance; it must be able to walk out of the stable and stand in balance. I also like horses to be good movers and to be very light on their feet. Most bargains are by horses that are unfashionable out of a good dam line. If they are by something fashionable you’d be paying twice or three times as much.

A good example is the filly Jack Naylor I bought just over a year ago for €10,500. She had a nice pedigree and was by Champs Elysee, who hadn’t done that well by then. Two good horses I bought, Intelligent and Macs Joy, were both by Religiously, an unknown sire. I don’t mind them being by something strange if they’ve got a good dam line.

From a breeding perspective, it has been said that horses now are less sound than they used to be. Is this true?

I am not certain that statement is true. Before, if a horse went lame, the thing to do was shut it up in the stable for three or four weeks because you thought it had pulled a muscle. You didn’t have scans so you didn’t know whether it had done a pelvis unless it really looked as if it had. If a horse made a noise, you hobdayed or tubed it, because you hadn’t got a scope to put down it.

Now there is every kind of scope and we have much more information at our fingertips. I think we are more or less dealing with the same animal but are more aware of the injuries thanks to science.

Your daughters Emma and Kate must be a big help to you. What are their roles?

Emma has been running the office and riding out for the last five or six years. She deals with the hiring and firing as well as the accounts and books so I have just the one secretary, Susan. Between them, they leave me to do all the nice parts of the job – training the horses and being nice to the riders.

Kate has spent the last three years at Ballydoyle with Aidan O’Brien and loved it. She is back with me for three months, rides out, helps a lot in the yard and has ridden over 20 winners. 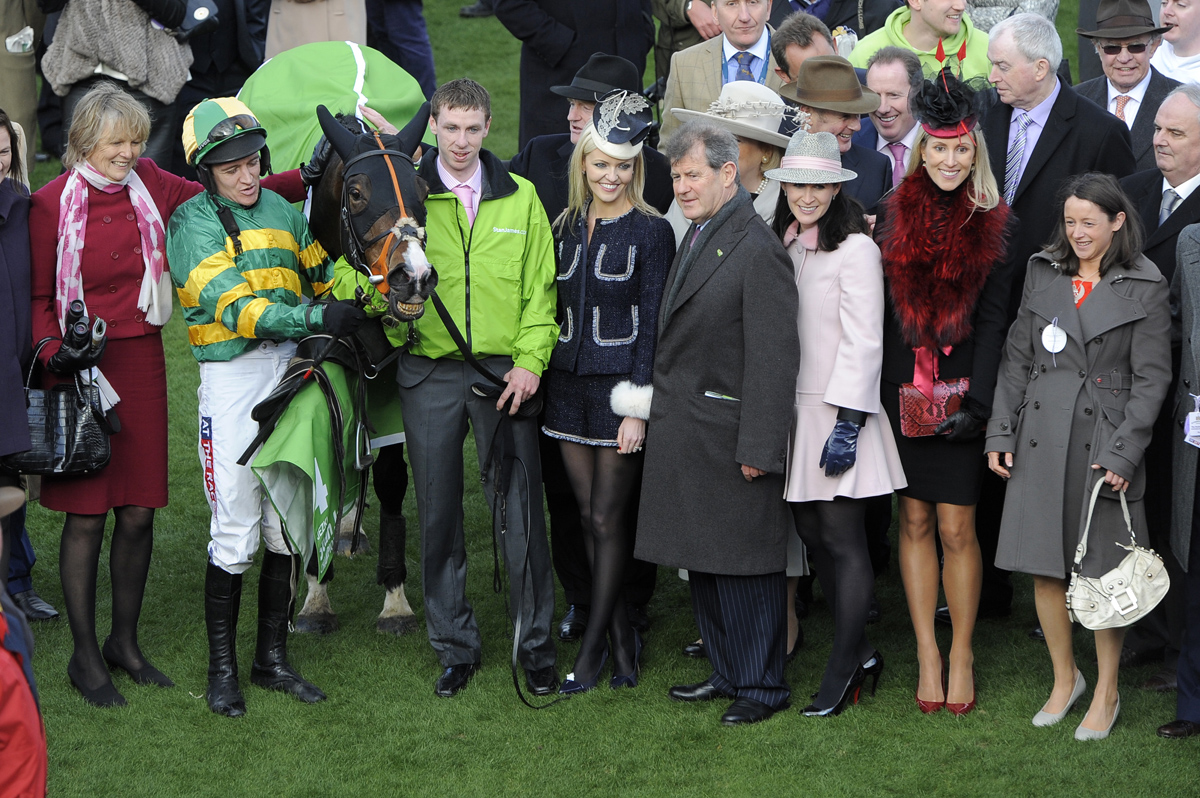 Harrington rates Jezki as the best hurdler she’s ever had

You say Jezki is the best hurdler you’ve had, though Moscow Flyer never got the chance to show how good he was over hurdles as he never ran in the Champion Hurdle. Was he up to winning a Champion Hurdle?

He was going to take on Istabraq in the 2001 Champion when the foot and mouth outbreak caused the meeting to be cancelled. They met three times but never finished a race together. They were frustrating encounters because Istabraq fell twice and Moscow Flyer the other time. I think he would have been up to winning a Champion Hurdle, I really do.

Maybe if he’d have won the Champion I may never have gone chasing with him; there would have been all sorts of ‘ifs’ and ‘buts’. The first time he ran over fences he took a mother and father of a fall and everyone said go back to hurdling with him. I said ‘no’; I knew he was trying to walk on water, standing off too far. We carried on and the rest is as it was.

In what way did the phenomenal success of Moscow Flyer – 26 wins over fences and hurdles, 13 at Grade 1 level – affect your life?

He put me more on the map than I had been, he took me to a lot of places I never thought I’d go to, and we had a lot of fun. It was a great privilege to train a horse like that. He won 13 Grade 1s and never once ran in a handicap.

Moscow Flyer, now 21, is based at the Irish National Stud where he is an equine ambassador for the Irish Horse Welfare Trust. Is he still very popular and do you ever get to visit him?

Everyone wants to go and see him. He was meant to parade on Champions’ Day at the Curragh but unfortunately he had a stone bruise and didn’t make it. A lot of people see him, he loves being there and they look after him wonderfully well. He’s at the Irish National Stud with Beef Or Salmon, Kicking King, Hardy Eustace and Rite Of Passage.

Is your bargain buy Jack Naylor a genuine Classic contender this year?

Yes, I think she is. I know she started from humble beginnings but she won a Group 3 and a Listed race with a penalty. She ran well enough in the Marcel Boussac in France where they didn’t go quick enough for her. If anything she’s an Oaks filly, not very big but very strong.

We might even run her in the English Guineas because if she ran here in any of the trials she’d have to carry a penalty. We’ll just see what the spring brings. We’ve also got other nice fillies, Lola Beaux, Bocca Baciata and Jeanne Girl.

What do you see as the basic difference between racing in Ireland and England?

We all take each other on in races; we don’t have the choice of a lot of races like you do in England so we can’t keep avoiding each other.

Very few of our top horses run in handicaps because we have a good programme of condition races. It’s not worth going to England unless it’s for a big race because you are running for so little money. Of course, you’d take a mare over for a suitable opportunity if you want to get a bracket for her.

What change in Irish racing in recent years has had the biggest impact on the sport?

Basically the recession has reduced the number of horses. At the peak of the Celtic Tiger there were something like 12,000 foals produced a year and now we’re down to about 7,500. If we can maintain the bottom end of the prize-money the smaller trainers, jockeys, agents, valets and stable staff will get a bite of the cherry, albeit a small one.

You are a mainstay in the top ten trainers’ table in Ireland but very few other women have made a similar breakthrough. Why is that?

I am always laughing about the situation. But Liz Doyle is doing very well training National Hunt horses and Joanna Morgan [who recently announced her retirement] had a winner at Ascot.

Is Willie Mullins’s domination of the NH game in Ireland a good or bad thing?

I look at it as a challenge to get better. I agree with what Gordon Elliott said recently: instead of moaning about Willie Mullins just go out there and try and improve yourself. Aidan O’Brien dominates the Flat because he is being sent the best horses every year, but there are lots of other trainers having success on the Flat, and a lot of good young trainers both on the Flat and National Hunt.

If you can’t compete you just chip away or even find something else to do. To me, Willie is a challenge.

The big debate in Britain currently concerns small fields, caused by a decline in the horse population and an increase in the number of races. Do you have the opposite problem in Ireland, too many horses and not enough races?

We have enough racing for our population. Though we do suffer a bit from small fields in some of the condition races and we are trying to address that with some new novice condition races for horses that haven’t got a rating above a certain mark.

Some good initiatives have been introduced here and they seem to be working. Recently we had two maiden hurdles with 30 runners in each, and that makes for competitive racing.

Which racing moment do you treasure most, and why?

When Moscow Flyer regained the Champion Chase as a ten-year-old in 2005. A number of people didn’t think he could win it again at his age. It meant a lot to all of us when he did. 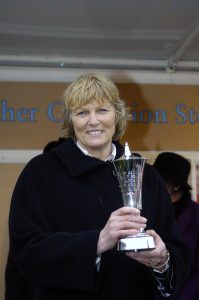 Up Next
Where are all the women in racing?