The gift that keeps on giving
Stories

A vintage year for freshmen

This year sees a decent bunch of young stallions with first runners on the track, including the likes of Dream Ahead, Zoffany, Roderic O’Connor and Poet’s Voice.

The class of 2015 will have their work cut out, however, to match the exploits of their immediate predecessors, who will be represented by their first Classic runners this coming turf season.

Lope De Vega led the way with his juveniles and finished the year with 25 individual winners from 55 runners headed by the Group 1 Dewhurst Stakes winner Belardo. His four stakes winners were matched in number by Siyouni, who was the leading first-season sire in France and second overall in Europe with progeny earnings of £643,964 to Lope De Vega’s £752,064. His 19 winners from 42 runners also matched Lope De Vega’s impressive strike rate of 45%.

Leading the way for English-based freshmen in 2014 and third on the European table was Whitsbury Manor Stud’s Showcasing, who was actually second only to Zebedee on individual winners, with 29 to his name. Among them were three stakes winners, including Group 2 winner Capella Sansevero.

Tally-Ho Stud’s Zebedee sired 32 first-crop winners to lead the numerical contest and has a seriously impressive representative among them in the form of dual Group 2 winner Ivawood, whose only defeat of the season came when beaten a nose by Charming Thought in the Group 1 Middle Park Stakes.

Starspangledbanner’s notable strike rate of 55% was yielded from 11 winners from his small book resulting from his well publicised fertility issues. Prix Morny winner The Wow Signal was one of two Royal Ascot Group-winning juveniles for the Australian-bred son of Choisir, who returns to Ireland for Coolmore this year.

Also among a really strong division in 2014 who to have sired a first-crop Group winner are Paco Boy, whose son Beacon won the Flying Childers Stakes; Norfolk Stakes victor Baitha Alga’s sire Fast Company; Coolmore’s Rip Van Winkle, who has a Group 1 winner to his name already in Dick Whittington; and Equiano, who stands at Newsells Park Stud and in the sire of Firth Of Clyde Stakes winner Dark Reckoning. 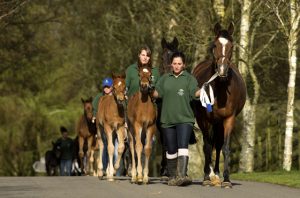 Up Next
The gift that keeps on giving