A light that never goes out
Stories

A thoroughbred in all but name?

We adore French food and wine, we admire the flair and independent thinking of the French and recognise they stage Europe’s most significant Flat race. And now, it seems, we cannot get enough of their AQPS horses.

Mention Sprinter Sacre, Quevega and Sir Des Champs, three representatives among the current racing crop, and you have fabulous advertisements for a breed of horse that is French to its core. Neptune Collonges, who retired after winning the John Smith’s Grand National in April, was another recent flagbearer.

The translation of AQPS – ‘Autre que pur-sang’, meaning ‘other than pure blood’ – implies a breed that has no chance in races against pure-bred, fleet-footed thoroughbreds, yet they have become major race winners on both sides of the Channel and Irish Sea. Some confusion arises here, for Quevega and Neptune Collonges are registered as SF, or Selle Francais, but they were foaled before 2005 when the AQPS stud book was founded.

Since then a breeding programme has been followed to produce jumpers for a market in which a correct young horse with form at Auteuil is worth a six-figure sum.

That also proved the case when unraced three-year-old Venitien De Mai (by Sprinter Sacre’s sire Network) was offered at this year’s Tattersalls Derby Sale in Ireland by Peter Vaughan’s Moanmore Stables and made €130,000. 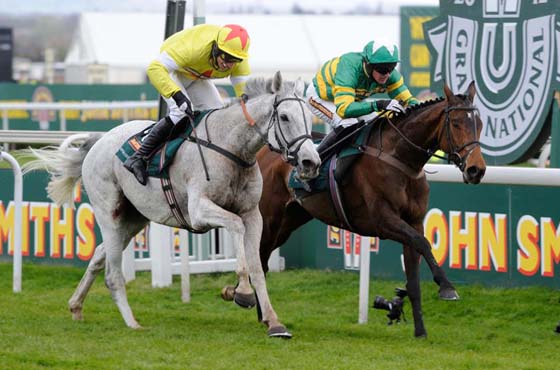 Neptune Collonges was a recent flagbearer for the AQPS breed

Money garnered from the Pari-Mutuel-driven central fund has helped promote AQPS as a breed and establish its own association, which groups the various organisations of breeders and owners, and has sought to market these uniquely-French but familiar-looking horses.

Head into rural France to visit trainers and AQPS breeders and you will receive a friendly welcome. There is no easier way to find them en masse during the summer and early autumn than at regional shows, which act as a shop window for the breed. It has become fashionable to invite members of Britain and Ireland’s racing communities – often leading trainers – to judge at these events, which are limited to foals and two-year-olds.

It is said up to 80% of the competitors are for sale and, while the breeder of a supreme champion heads an exclusive club and receives plaudits from breeding colleagues, the red rosette adds to a horse’s value. Whether you can buy these premier specimens at a realistic price is questionable, however.

As one insider put it after watching a colt foal by Poliglote (yes, sire of the Arc winner Solemia) top the bill at Le Lion D’Angers in September: “You could offer €80,000 for that foal and they would not sell, for if he wins a race at Auteuil at three he could make €250,000 or €300,000 to a British or Irish stable.”

Distinct breed, or a myth?

What makes an AQPS horse different from a thoroughbred is a question that produces numerous answers.

Henri Aubert, famous for producing France’s finest export, the fabulous (thoroughbred) Kauto Star, is an AQPS breeder. He says: “They have a longer racing career, they are stronger and have more stamina, but they are not as quick in a straight line.”

Non-thoroughbred horses trained in France have been appearing in Britain for decades and shrewd foreigners were going there to find horses long before Nupsala’s 25-1 victory in the 1987 King George VI Chase created a stir, not least among French breeders of non-thoroughbreds, who realised they might be on to something.

At that stage horses like Nupsala were said to have more bone than thoroughbreds and, while said to be slower, their toughness and jumping ability were prime assets. That was certainly true in cross-country races, a staple diet of French jump racing held at numerous tracks around the country.

Nature and nurture had created these non-pure bloods, but repeated crosses of thoroughbred stallions on non-thoroughbred mares – and then their daughters – to produce commercial-looking horses that also won races can only have led to a reduction in the non-thoroughbred genes.

They are bred on farms using only strong, select mares ; breeders give the young stock time

The situation could be arrested if greater numbers of non-thoroughbred stallions were used in the breeding process, but there are only a handful operating in France, even though the great Al Capone II and his brother, Gold Cup winner The Fellow, were by Italic, a non-thoroughbred sire.

Some officials are worried, fearing money the breed receives for its own series of races in France could be pulled – there is no point taking money from thoroughbred racing to give to AQPS if that breed of horse is considered thoroughbred too.

This leads to the question of whether AQPS breeders are laughing quietly behind our backs as we queue up to buy, thinking we are gaining something unique, when it is thoroughbred in all but name?

Laurent Viel, who is based at the Sennonnes Training Centre, where his 70-horse string includes “about a third that are AQPS horses”, says: “There is no difference in the way I train or race thoroughbred and AQPS horses. They are now so similar.”

Ireland’s champion trainer Willie Mullins would probably concur with that view, although he says: “There’s a difference about the way they are produced – Irish stores are bred to sell, French horses are bred to race.

“There was a time when they looked like they were suited to cross-country racing but they have shown they are capable of weight-carrying and speed, and are suited to racing outside of France.”

Yann Poirier, President of the AQPS Association’s West region, says: “A few years ago farmers were breeding AQPS on a hobby basis. Then horses like The Fellow and Al Capone II won the Grand Steeplechase de Paris and big races in Britain, and the breeders became more specialised. By mating AQPS mares with certain stallions we have added some speed and the horses are more precocious, yet they still jump. And the breeders are passionate about jump racing.”

Francois Gorioux, who is responsible for racehorses on the National Studs committee, says: “The typical characteristic of AQPS horses is the way they are produced. They are bred on rural farms by breeders who use only strong, select mares and then give the young stock time. The way the foals and young horses are handled on these farms is a factor, as is the stallions which are used.

“These stallions have shown ability over at least 2,000 metres [ten furlongs] and durability by racing to the age of five or even six.”

Would he like to see more AQPS stallions? “That would be difficult to achieve,” he says, “because breeders produce horses to race and so colts are gelded – and if we were to use AQPS stallions on thoroughbred mares we would have the problem that many would not have the size of AQPS mares.”

He then adds with a smile: “And if we put AQPS mares to AQPS stallions it would be like putting diesel on diesel!” 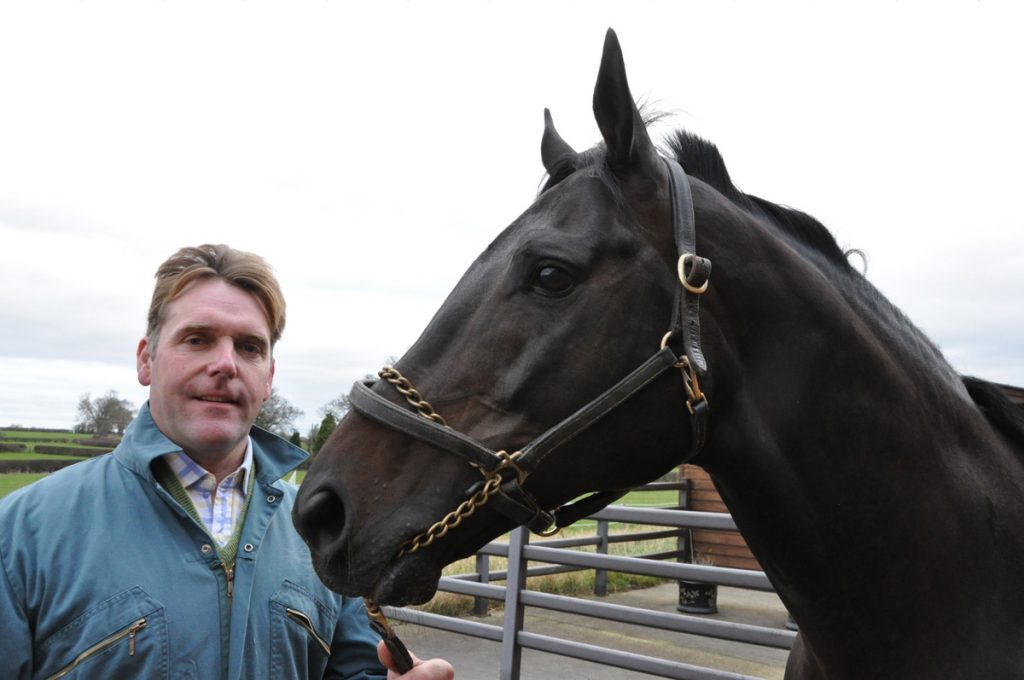 Venn’s broad-based client list includes jumps trainers, hence his interest, while Futter has pinhooked young stock – thoroughbred and non-thoroughbred – including some by the stallions Sulamani and Malinas, who were French-based but now stand at Yorton Farm.

Futter says: “As with all pinhookers we’re looking for youngsters by the next fashionable sire and asking questions such as, ‘Which broodmares has he covered?’”

The once-held image of AQPS horses as heavy-boned plodders probably derived from stories of the breed’s origins, when farm horses were crossed with thoroughbreds, but that is not true today, says Futter, who adds: “They are often lighter, more athletic and an earlier type. To be honest I’ve seen [AQPS] mares who were light, and some big and plain, and the results speak for themselves, but I cannot believe they have got any better stallions than we have in Britain.

“One thing they have done is invested in stallions who have shown durability and often run over jumps. Midnight Legend is one of the few jumping stallions here who ran over hurdles.”

Venn has established a network of contacts among French farmer/breeders and says: “Buying horses off the track in France is so prohibitive, in part because their prize-money is so good, and they can afford to keep horses to race. Buying unraced stock privately is one of the angles we’ve had to explore.

“You can often do a deal at one of the shows and if you buy a foal the breeder will often keep it until June the following year to ensure it qualifies for premiums.”

Could Venn, a seasoned admirer of AQPS horses, tell a foal of that breed from a thoroughbred? “No,” he says succinctly. “You get a higher percentage of bays among AQPS foals, but that is about all. A good, correct young horse, related to winners, is a horse we’re interested in, whatever its breeding.”

End of National Studs a concern

One advantage of being an AQPS breeder has been concessions on stallion fees, but that could be in jeopardy with the break-up of France’s National Studs.
Breeder and senior AQPS official Poirier says: “Haras Nationaux supported AQPS breeders by offering them lower stallion fees and private studs often did the same.”

With more than 80 studs, housing not just thoroughbred stallions, but also sport horse, pony and donkey sires, there was plenty of choice, but the previous French government of President Sarkozy had to reduce state spending and the studs felt the axe.

Their future is still unclear, although in last month’s issue of Thoroughbred Owner & Breeder it was revealed that one stud, Cercy La Tour, which houses Network and Voix du Nord, a rising young star of the breeding sheds, will be run by a co-operative of breeders, preventing the need to sell the stallions. However, the new controlling power put ‘book full’ signs up outside Network’s stable straight away.

The fate of other studs and sires is still under consideration, but the pool of available stallions at easily accessed venues may not be so large in future. 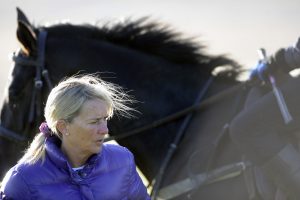 Up Next
A light that never goes out