Cheveley Park Stud’s ascendancy in the National Hunt sphere continued on Monday when A Plus Tard got up in the shadow of the post to deny 2018 hero Kemboy in a thrilling renewal of the Grade 1 Savills Chase at Leopardstown.

The race’s complexion had changed markedly on the final circuit when Minella Indo made an uncharacteristic error that saw him fall at the eighth fence. A fence later saw favourite Delta Work unseat replacement jockey Sean Flanagan after nodding on landing.

Melon, one of five runners in the race for trainer Willie Mullins, began to push on down the back straight with his progress closely monitored by stablemate Kemboy, who had set a fractious early pace.

The two were left to battle it out approaching the final two jumps but despite looking one-paced back in third, A Plus Tard began to respond to the urgings of jockey Daragh O’Keeffe and claimed the race by half a length.

De Bromhead said: “It was unfortunate with Minella Indo, but he seems okay and Rachael [Blackmore] seems okay, it was just very frustrating. I’m delighted for A Plus Tard, Darragh and Cheveley Park – delighted for all of us. It was a brilliant ride from Darragh, he was very cool on him.

“He has lots of class and was fantastic there. He had a tough race there, so I’ll speak to connections and we’ll decided where to go from here.”

The winning jockey added: “He did everything right, he travelled, and I thought we went a really good gallop. Rachael said to me beforehand that she was going to sit upsides in front, and she was only a couple of lengths ahead of me, so I wasn’t worried.

“I sat away and had Paul Townend in front of me [on Allaho] and [A Plus Tard] was pinging fences. When I gave him a squeeze after jumping the second last, he picked up and he galloped right to the line.

“It was brilliant and I’m absolutely over the moon. I can’t thank Henry de Bromhead enough – it’s my first Grade 1 winner and my first winner for him. This lad had a real, live chance. There were a few questions about whether he stayed or not, but he definitely stayed anyway.”

Having been sourced from France for Cheveley Park Stud, A Plus Tard has never finished out of the first three in ten starts for trainer Henry De Bromhead. His record includes success in the Listed Novices’ Handicap Chase at Cheltenham and the Grade 1 Paddy’s Rewards Chase last year.

Another jockey to post their first top-level winner on Sunday was Jonathan Moore, as he made all the running on the Gavin Cromwell-trained Flooring Porter to take the Leopardstown Christmas Hurdle.

The performance vindicated the decisions of connections who had opted to supplement the five-year-old for the contest after a particular eye-catching victory in a handicap hurdle at Navan earlier this month.

Moore said: “All credit to Gavin and the owners as they had the courage to supplement him for this race and it’s paid off. What a horse!

“It wasn’t the plan to make the running at Navan, but he just told me himself that he wanted to go there. When he’s in front he seems to relax a lot better and you are able to get breathers into him. I felt like I was always in my comfort zone out there.” 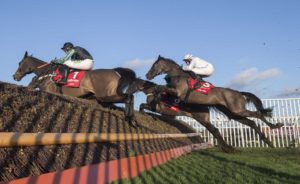