A new breed of horse sale

Goffs’ raid on central London was rewarded with international participation, impressive prices and a special foal

It’s not often one jumps out of a black cab in central London and bumps into a gaggle of Irish breeze-up pinhookers. The merry band, led by Willie Browne – along the pavement and in the sales ring as it turned out – headed into the park surrounding Kensington Palace with several trainers and members of the press in tow and, after a few detours, eventually arrived at The Orangery, where an auction like no other was about to get under way.

Goffs’ bold move to stage a sale in the heart of London on the eve of Royal Ascot can only be applauded and it certainly didn’t sell itself short on the entertainment front. Following the initial announcement back in January, more and more details emerged over the ensuing months regarding the catalogue’s final composition, with plenty of surprise additions to the 30-plus breeze-up horses along the way. This was a horse sale, but not as we know it.

Vendors, purchasers and a wide variety of bloodstock professionals from all over the world arrived knowing they would witness the first offspring of Frankel to go under the hammer – a colt out of Crystal Gaze, who is back in foal to Juddmonte’s champion and was offered alongside him – but adding to the pre-sale entertainment was the parade of two Tweenhills stallions, Makfi and new boy Zoustar, who should have been on the racecourse for the Royal Ascot meeting but sustained a ligament injury shortly after his arrival in the UK from his native Australia.

The flesh-and-blood equines were almost outdone by the War Horse puppet Joey, whose appearance at The Orangery prompted jockey-turned-trainer Johnny Murtagh to vault aboard, much to the delight of the crowd.

Afternoon tea merged into cocktails and canapés and, with all lots bar the mare and foal being sold by video link from Kempton racecourse, the pervading atmosphere was that of an upmarket garden party, albeit one with the urgings of the auctioneer and the occasional bang of a gavel as an audio backdrop.

Of course, a number of those assembled were there to do serious business. Ger and Lynne Lyons had travelled over from Ireland with their Coventry Stakes entry, the Marble Hill Stakes winner Cappella Sansevero. The first-crop son of Showcasing, who finished runner-up to The Wow Signal at Ascot the following day, was widely predicted to sell well but he ended up stealing the show after fetching a £1.3 million bid from Sheikh Hamad Al Thani, one of three brothers within the QIPCO operation, which not only gave its backing to the London Sale, both in name and through purchases on the night, but also to Royal Ascot as an official partner of the meeting.

On their behalf, David Redvers also signed for two breeze-up horses and the lifetime breeding right to Invincible Spirit, another unusual but fascinating element to the catalogue which went for £160,000.

It’s on the eve of Royal Ascot and at Kensington Palace. How much closer to central London can you be?

One of the main aims of staging a sale in British racing’s most prominent week is to attract new buyers to the bench. Most of the names on the purchasers’ sheet were familiar – and some of the breeze-up vendors found the market tough – but participants represented a good geographical spread, with representatives from America, Australia, Russia, Japan and Hong Kong, as well as Qatari buyers outside the Al Thani family, in action.

Realistically, only a few breeding operations would have the firepower to step in for Group 2 producer Crystal Gaze and her Frankel colt, offered by Qatar Bloodstock through Tweenhills Stud, and the eventual buyer was, perhaps not surprisingly, Coolmore. MV Magnier opened the bidding at £1 million and didn’t have to go too much higher to secure the three-for-the-price-of-one deal for £1.15 million.

Magnier junior is used to post-purchase interviews by the regular small pack of bloodstock journalists, but the interrogation following his signing of the docket reached levels hitherto unseen at the sales and resembled the type of post-Derby scrum regularly faced by his colleague, Aidan O’Brien.

The hype surrounding Frankel has not yet abated and will doubtless continue well into the season of his first runners. The first public appearance of one of his foals prompted media coverage on a par with Dancing Rain’s turn through the ring at Tattersalls last December, when the Oaks winner sold for 4 million gns carrying what transpired to be a filly by him. 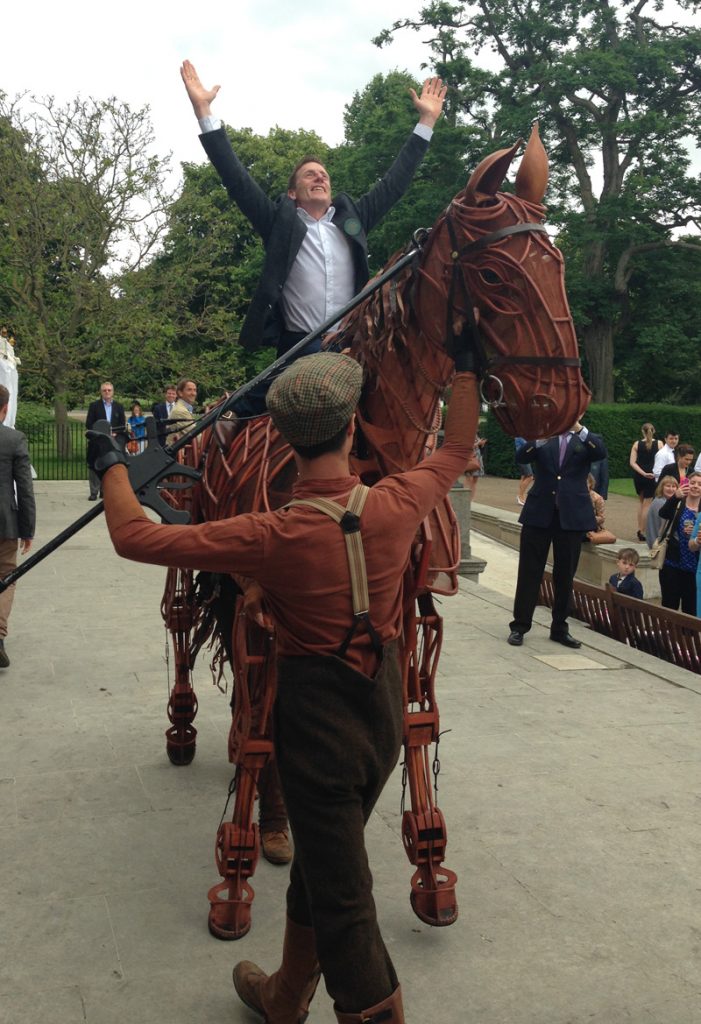 Fleetingly, bloodstock hit the front pages and the mainstream news bulletins, and it was back in the spotlight after the London Sale with slots on ITV News at Ten and BBC Breakfast, not to mention the non-sports pages of several national daily papers.

Australian trainer Gai Waterhouse was one of the international contingent in town for Royal Ascot and spent £330,000 on four-year-old Motivator gelding Café Society, who ran under her name at Royal Ascot on Friday. A regular buyer of Cup prospects at the Tattersalls Horses in Training Sale, this was the first time Waterhouse had bought at Goffs and she was fulsome in her praise for the new concept.

“It’s sensational and I’ll tell you why,” she declared. “It’s all about the timing, it’s perfect. In Australia, when they brought in the Magic Millions they challenged the market, and that’s what Goffs have done with this sale. It’s on the eve of Royal Ascot and at Kensington Palace. How much closer to central London can you be?”

Another unique element of the London Sale was its inclusion of 20 horses with imminent engagements at Royal Ascot. While top lot Cappella Sansevero stood his ground for the following day’s Coventry Stakes and, following the swift intervention of Weatherbys and the BHA, was able to run in the colours of Qatar Racing, several of those sold did not line up during the week.

Noel Quinlan’s two-year-old Prophesize, an impressive winner on his sole start at Redcar back in May, sold for £180,000 to Hong Kong-based Asian Bloodstock Services and was withdrawn from the Coventry, while Caledonia Lady, who was bought for Japanese owners at £300,000, was also a scratching from the King’s Stand Stakes.

Confirming that the London Sale would become a regular fixture in the Goffs calendar, Chief Executive Henry Beeby said after the final hammer fell but as the party continued at Kensington Palace: “We’re delighted on a number of levels. We’re pleased because the sale has gone well, and the venue and concept have both worked well. And we’re pleased with the enthusiasm demonstrated by vendors, purchasers, our partners and the industry in general.

“There’s genuine goodwill towards the idea. It’s been complicated to put on and we had to get people onside. The vendors have been brilliant and we thought to ourselves beforehand that we would consider anything that was a reasonable idea. Selling a breeding right to Invincible Spirit was a good idea and Qatar Bloodstock coming up with the mare and foal was sensational.”

He added: “We’ve tried to promote the thrill of Royal Ascot and I think there are new people here. The enthusiasm has blown us away. We couldn’t have done it without our partners, particularly QIPCO. I can’t underline how important their involvement was, both as supporters of the sale and the horses they’ve bought.”

As many people in the bloodstock world will know, enthusiasm is not something Beeby lacks and it is doubtless this seemingly indefatigable ‘can-do’ attitude which has seen Goffs garner plenty of publicity in the last year, through its handling of the Paulyn Dispersal and, more recently, courtesy of a blockbuster Land Rover Sale.

The London Sale is certainly quirky but, judging on its debut in the sales calendar, it is an event in just the right mould to provide a fitting and sustainable curtain-raiser for Britain’s premier week of Flat racing.

Up Next
Opportunity to discuss industry matters