‘Sir Alfred Munnings: A Life of his Own’ runs from May 24 to June 12 at the National Horseracing Museum in Newmarket

Sir Alfred Munnings’ depictions of raceday starts are the essence of Newmarket, a dash of colour and movement against the expanse of heath. His ability to capture the horse on canvas, particularly the Thoroughbred, won him many admirers during his lifetime and even more in the decades since his death in 1959. His studies of Hyperion and Sun Chariot, both of which hang in the Jockey Club Rooms in Newmarket, are among the most easily identifiable public works among his equine portraits as are the various racing and fair scenes, many of which hang in the Munnings Museum in Dedham, Essex.

However, a number remain in private hands and therefore are rarely on show – until now.

From May 24 until June 12, there is the opportunity to view many of these works at the National Horseracing Museum in Newmarket. In an exhibition titled ‘Sir Alfred Munnings: A Life of his Own’ that is hosted in conjunction with the British Sporting Art Trust, over 40 works are on show, many of them with a Newmarket theme.

The exhibition has been almost ten months in the planning and curated by Katherine Field, has been crafted using loans from public and private collections, including the Jockey Club, Atkinson Art Gallery, The Harewood House Trust and The Household Cavalry Regiment. It arrives in Newmarket following a three-week show at the Osborne Studio Gallery in London, where it was understandably extremely popular. 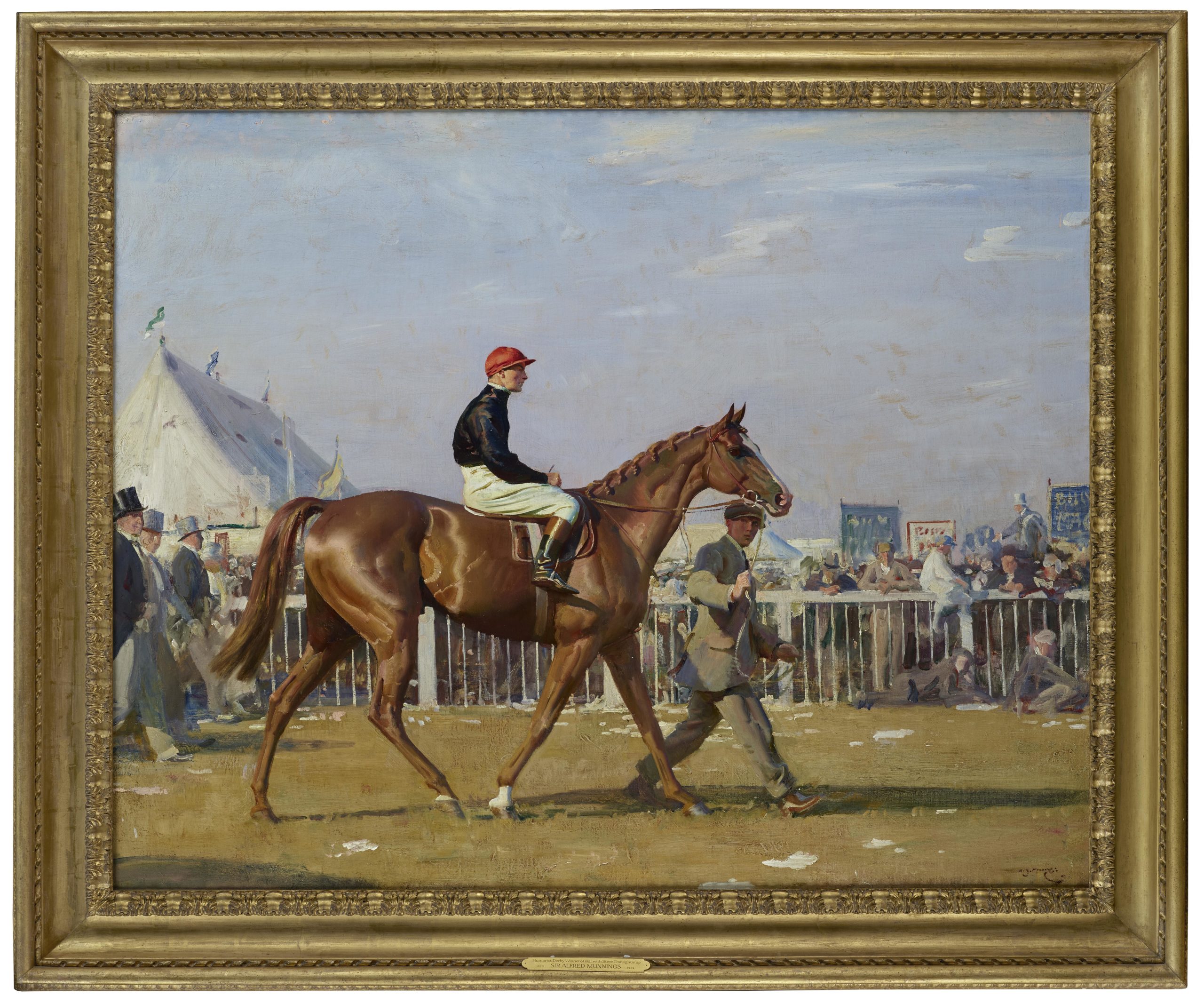 Pride of place belongs to Munnings’ sizeable portrait of Jack Joel’s ill-fated 1921 Derby winner Humorist with Steve Donoghue aboard. Loaned by a private collection and therefore never hung in public before, the painting depicts the horse heading out for the Classic amid detailed scenes of a 1920’s Derby day crowd. Poignantly, it was produced following the horse’s death, an event that Munnings’ came horribly close to witnessing in person.

The artist had been invited to view the horse at Charles Morton’s yard on one June Sunday and after studying the animal in the morning, drifted off for a nap. What happened next is outlined in his autobiography.

‘“Wake up, Mr. Munnings, wake up! Humorist is dead!”’ he wrote. ‘I opened my eyes. There stood Charles Morton’s wife looking like Ophelia in Hamlet, wringing her hands….

‘Out in the blacking glare of the chalk yard the light was dazzling. Becoming accustomed to the glare, I saw on the white chalk outside the door of the end box, a dark, dried-up trickle of blood. Morton then took the bunch of keys, unlocked the door and threw it open. “There,” said he; “did you ever see such a thing in your life?”

‘The horse lay dead on the straw, his head close to the door – the upper ear pricked, an eye still open. A large pool of blood had welled up to the threshold, churned into bright vermilion foam where the horse had breathed his last. Not only was there this pool of blood, he had thrown blood in great splashes upon the walls of the box, where he had turned round and round in fright, and reared…..It was a tragic sight.”

Of a happier provenance is the study of Lord Derby’s champion sires Hyperion and Fairway commissioned in 1938. The pair were standing at their owner’s Woodlands Stud in Newmarket and are depicted with their grooms Chinery and Cain. As with the Humorist painting, it belongs to a private collection and therefore has rarely been viewed in public before. 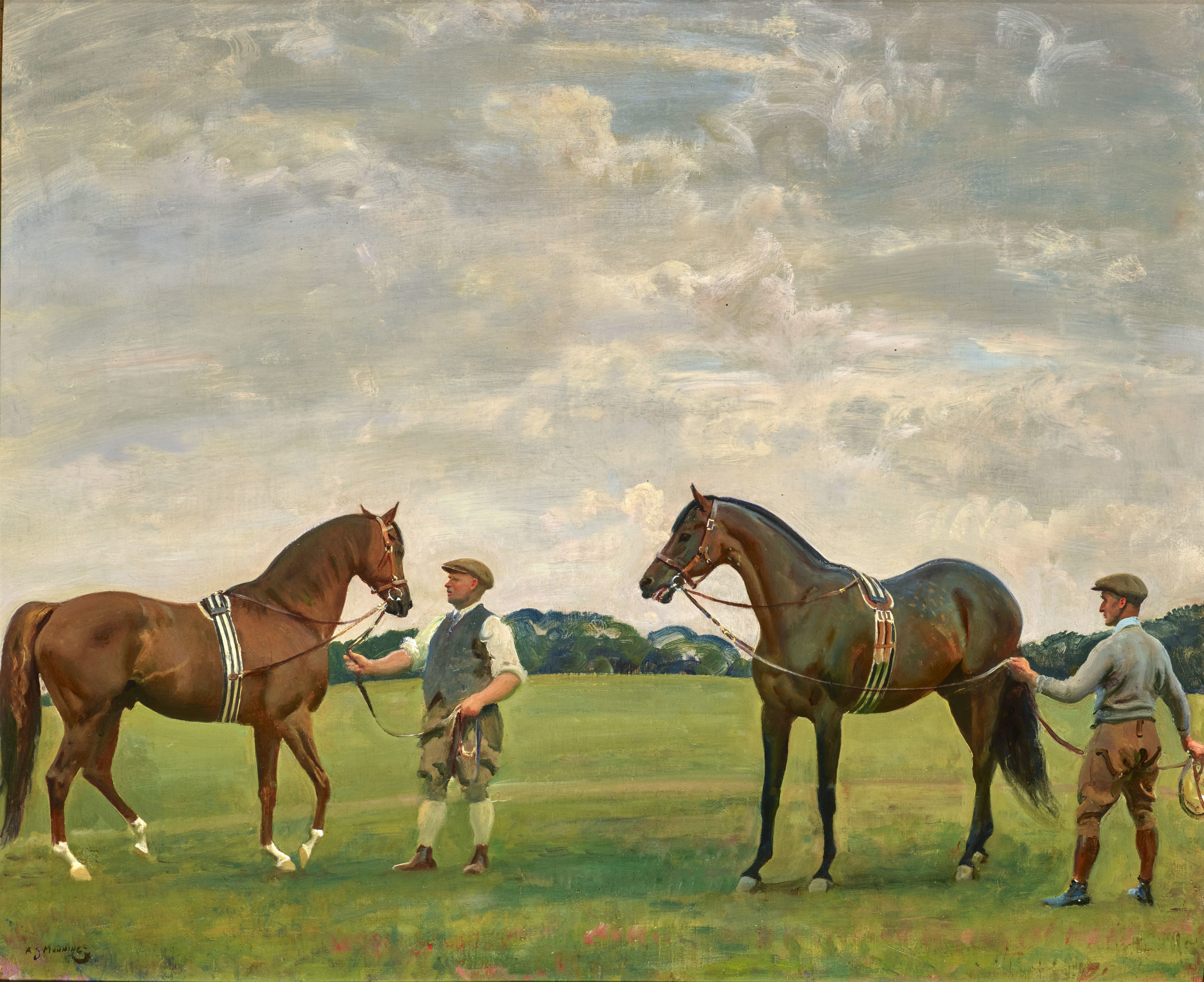 Hyperion (left) and Fairway at Woodlands Stud with Chinery and Cain. Photo – The Estate of Sir Alfred Munnings, Dedham, Essex

Munnings enjoyed painting Hyperion and described him as ‘a beautiful little horse….far beyond the average horse in intelligence. Chinery, his man, adored him, and looked upon him as a brother’.

Also likely of interest to the racing enthusiast is the wax model of the legendary stayer Brown Jack (commissioned 1935), the six-time winner of the Queen Alexandra Stakes at Royal Ascot, a study of Lord Derby’s Ascot Gold Cup winner Quashed (1936) and trainer Alec Taylor with Lord Astor’s Eclipse and Champion Stakes winner Buchan (1920) alongside the various studies of horses exercising on Newmarket heath.

‘Sir Alfred Munnings: A Life of his Own’ runs from May 24 to June 12 at the National Horseracing Museum in Newmarket. 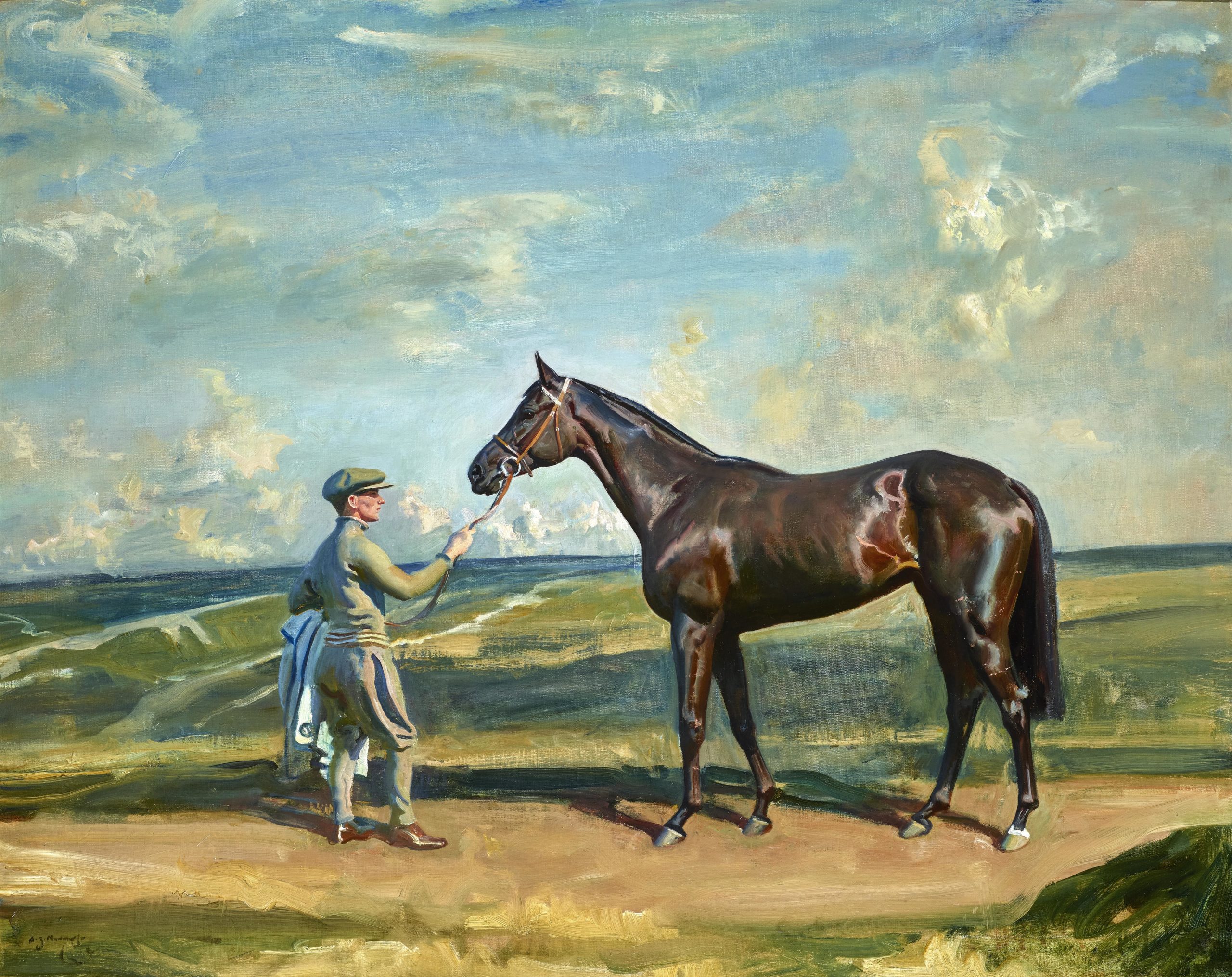 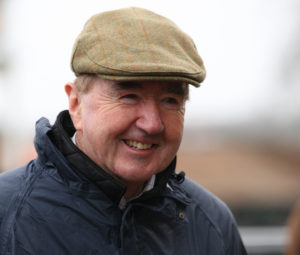 Up Next
Homeless Songs brilliant in Irish 1,000 Guineas