A first Derby for Rosewell House

Hours before the fourth Classic of the season, the participation of the colt was in doubt after he spread a plate

In one of the most open Derbys for many years, the Irish cream rose steadily to the top. Harzand gave jockey Pat Smullen his first victory in a race that had not only eluded the eight-time Irish champion jockey but had also escaped the radar of the colt’s handler, Dermot Weld.

In the weeks leading up to the showpiece event, the ground was always a major factor over whether Harzand would take his chance or not. His two victories earlier this year were achieved in heavy ground, at Cork in a maiden and at Leopardstown in the Ballysax Stakes, and it was duly noted that any firmness in the going description would tip the balance against running.

With the ground in his favour it turned out to be an 11th-hour scare which put everything in doubt for connections, as it was found the colt had spread a plate whilst travelling over. The fact that his foot was bleeding was enough to be concerned. With the assistance of Jim Bolger’s farrier and the rest of his Rosewell House team, Weld kept his charge in the lineup.

Port Douglas, one of five runners for Aidan O’Brien, set an honest pace from the outset, tracked in second by the Andre Fabre trained Cloth Of Stars under 2011 Derby winning rider Mikael Barzalona. The top two in the market, US Army Ranger and Wings Of Desire, were restrained early while the likes of Harzand, Ulysees and Idaho sat in midfield.

Approaching Tattenham Corner, Smullen found himself in an ideal position tracking Idaho, and kicked on at the three-furlong pole. Harzand moved past Seamie Heffernan’s mount with a furlong and half to go but had to show courage to fend off Ryan Moore and US Army Ranger, who was delivered widest of all and, while not seeming to handle the descent brilliantly, ran home strongly. US Army Ranger got to within three quarters of a length but Harzand found extra reserves and pulled away by a length and a half at the winning post.

Smullen who put his head in his hands seconds after the race was visibly filled with elation. “Unbelievable. This is what you dream of you know,” he reflected. “For the boss to win this race is more fitting, I’m delighted to have ridden a winner for him, he’s the world’s greatest trainer.”

“He dug in. I could sense Ryan coming and spotted the white face of US Army Ranger but this horse responded for me and I knew we would get to the line well, and the race went pretty much perfectly.”

For Weld, 67, his stellar training career has spanned a British 2,000 Guineas, two Melbourne Cups and even a Triumph Hurdle in the National Hunt sphere to name but a few. He has tried to win the Derby six times in the past, posting his best position when Casual Conquest finished third to New Approach in 2008.

“I won my first Classic with Blue Wind here many years ago and probably didn’t have horses like this to win this great race but it’s wonderful,” he said. “We had a huge worry this morning because he spread a plate travelling over and he was a very doubtful runner right up until about an hour ago, but with the tremendous help from all my colleague’s and team we made it.”

His Highness the Aga Khan last tasted success in the contest with Sinndar 16 years ago, and this year’s renewal brings his Derby tally up to five. From a breeding perspective, the performance will be a further boost to the stock of Sea The Stars.

For the Coolmore operation and Ballydoyle it was a near miss as US Army Ranger and Idaho finished second and third. O’Brien was nonetheless delighted by how his duo fared in the race and despite growing up a lot from Chester, the former visibly showed signs of inexperience as he ran against the Epsom camber, something which has found out many a thoroughbred down the years.

Earlier in the afternoon, the topically named Epsom Icon under champion jockey Silvestre de Sousa ran out a facile winner of the Group 3 Princess Elizabeth Stakes. Receiving 12lb from the Alain De Royer-Dupre hot favourite, Sayana, the three-year-old was pushed out to win by three and a half lengths, with the former seeming not to handle the camber.

In what was a high class renewal of the Group 1 Coronation Cup, King George hero Postponed put in a dominant display to beat off his rivals under jockey Andrea Atzeni and secure his third victory at the highest level. The Roger Varian-trained five-year-old was given a good lead into the race by stablemate Roseburg, who went five lengths clear at the top of the home straight. But after travelling strongly, Postponed cruised by effortlessly to put daylight between himself and Found, who ran on to claim second.

“He’s a machine, you put him anywhere in the race, he travels good and goes on any ground,” said Atzeni. “He’s a proper racehorse and I’m glad for the boss and Sheikh Mohammed Obaid who is here.”

To the fastest five furlongs in the country – the Investec Dash – and 2014 winner Caspian Prince ridden by Robert Winston managed to secure the prize again by holding off the challenge of the fast finishing Kimberella, who fluffed his lines at the start. 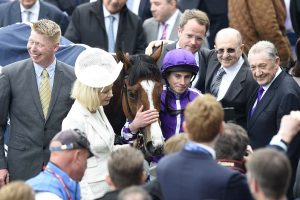 Up Next
Minding overcomes traffic to shine