A dream to fulfil

One of Scandinavia’s top racehorse trainers, Rune Haugen, will fulfil a lifelong dream by moving to Newmarket next year.

In his early days, Haugen tried to follow in the footsteps of his father and grandfather as a ski jumper, but the arrival of a pony on the family farm when he was 13 soon diverted his attention to horses.

“I saw the Norwegian Derby on the telly and said, ‘That’s it, I want to be a jockey,” reflected Haugen.

He continued: “Everyone laughed because, as the eldest son, my mission was to take over the farm. And when I left home aged 17 to become a jockey my father said, ‘Don’t worry, he’ll be back in a month’. But I never returned.”

A former champion apprentice, since switching his attention to training he has saddled more than 400 winners – from Germany to the UAE – in a career spanning 20 years.

His lease at his current set-up at Skoger near Oslo is due to finish at the end of the year. This along with a need to focus more on the horses has prompted the switch.

Haugen said: “At Skoger I’ve been like a farmer, the blacksmith and the gardener, I’ve had to take care of everything; that was another reason for the move as I couldn’t take it anymore. In the winter I had to prepare all the tracks myself and I sat on the tractor for three hours a day.

“I am just turning 50 and I want to kick on, and if I don’t make the move now I’ll never do it and I’ll probably regret it for the rest of my life.”

Haugen has the backing of a trio of enthusiastic owners from the United Arab Emirates including the former jockey Abdulla Al Saboosi, and Mohammed Al Amri, whose father is a leading camel trainer in Dubai.

Without exception, his loyal Norwegian owners have opted to make the move with him, and he hopes to start next year’s turf season with around 35 horses.

The experienced handler will initially base himself in Cambridge, where his eldest daughter Tina, who happens to be travelling head lad has a house with William Buick’s younger brother Andrew.

I am just turning 50 and I want to kick on

Quarterback, a dual Group 3 winner will no doubt be a standard-bearer for the new operation. The four-year-old son of American Post has visited these shores twice already, his best finish a close second in a Listed contest on the Rowley Mile last October behind William Muir’s Restorer.

However he impressed connections in September, when scoring by five-lengths in the Stockholm Cup International at Bro Park. He stopped the clock for the mile and a half in a rapid 2m 25.4s.

Despite the switch, Haugen’s connection with Scandinavian racing will not be disappearing anytime soon.

“I will still be taking some of my Scandinavian-bred horses back in the spring, I have already organised a satellite yard at Ovrevoll racecourse for them, and some of my other horses could go back there for big money races,” added Haugen. 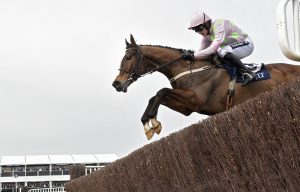 Up Next
Vautour dies after tragic accident