It’s Newton Abbot’s final meeting of the summer season and David Pipe has just left the parade ring after saddling his first runner of the afternoon. He’s stopped by a middle-aged woman, who introduces herself as Linda, and the two have a brief chat.

“Come up to the box, help yourself to a glass of wine,” says the trainer, and the woman and her companion head off to the sanctuary of his private box.

A wry smile emerges on Pipe’s face. “That was Thomas Barr’s sister,” he says quietly. “You don’t burn your bridges in this sport.”

Pipe trained the Barr-owned Osana to win three races, including a Grade 2, and finish runner-up in the 2008 Champion Hurdle. Despite those achievements, the horse was removed from his stable and sent to Edward O’Grady in Ireland. Yet there’s no hint of ill-feeling; losing horses is part and parcel of life as a trainer, something Pipe knows only too well.

His takeover at Pond House, replacing a father who re-wrote the record books in saddling over 4,000 winners, happened during a period of great change, not just in National Hunt racing but the wider world.

When Martin Pipe was crowned champion trainer for the 15th time in 2005/06, he had been helped greatly by the stream of winners – 111 in total – carrying the silks of David Johnson. The next season, when Pipe senior was finally usurped by Paul Nicholls, Johnson supplied 57 winners. The balance of power had shifted unmistakably in the West Country. It was time for a new regime at Nicholashayne.

The recession that began during David’s first term – when he saddled an impressive 134 winners, becoming in the process the first British handler to record a century in their debut season – forced Johnson to reduce his string further. Last year the former champion owner had just eight winners, five of which were trained by Pipe.

“David would love to have the amount of horses now that he had before,” says Pipe. “Unfortunately he’s been hit hard in business, as a lot of people have, but he’s a real fighter and a very good businessman. I’m sure he’ll bounce back and hopefully have the numbers in training that he once did.

“He owns around seven horses with us now, including those in partnership. But he’s still a big supporter and we’ve had some amazing times at Pond House.”

Those amazing times were highlighted by Comply Or Die’s Grand National success in 2008, yet Pipe cannot afford to dwell on past glories, with last season’s winners’ tally dropping to 65.

He has had to re-stock his stable with new horses and new owners. “It will take me two or three years,” was Pipe’s response to this magazine in 2006 when asked about building up his band of patrons. The subsequent recession only made his task harder. So how has he done?

“Numbers did drop in the last couple of years – these are tough times financially and this is an expensive hobby, but we’re pleased that numbers are back up this year to when I started, around the 100-mark,” he says.

“The ideal figure would be 160 but you have to be realistic. We rent out the other yard to Neil Mulholland and, while I’d love to fill those boxes up myself, it works well. I’m very lucky that because of my father’s and grandfather’s efforts I don’t have to pay rent.

“We’ve got a lot of new owners – Robin Geffen, Raymond Tooth and Malcolm Denmark have sent horses to us. We’re looking forward to the new season.”
Having fewer darts to throw at the dartboard has clearly affected the return of winners, however Pipe offers a further reason why the statistics may not reveal the whole story.

Under the old regime, the relentless pursuit of winners would see runners dispatched to all corners of Britain in all types of races, but the approach these days is more considered and influenced by the ‘p’ word: prize-money.

“In this climate you have to do what is best for the owner,” says Pipe, “and if that means finishing second at Ascot getting £10,000 rather than going to win at a smaller track for £3,000, so be it. It’s something Dad never did but then he was in a different situation.

“Of course I want more winners – that’s what this game is all about – but the focus is on getting the best out of the horses you have. Last season, I’msingingtheblues never won a race, which was disappointing, but he finished second to Master Minded and picked up a fair amount of prize-money in his races (just over £25,000).

“I have owners who don’t want to run in races below the tariff – that’s fine by me. Sometimes it costs you winners but the owner pays the bills and they have the power to say yes or no.

“Owners don’t expect to make money from their racehorses, but they’d like to get something back. Now, unless you have a Saturday horse, you’re not really getting much back, if anything.”

The owners in Pipe’s box at Newton Abbot may not be getting much back but that doesn’t seem to be stopping them from enjoying themselves. Far from it; with the constant banter and flow of drinks there’s a party-like atmosphere.

Sarah Ling, owner of Laustra Bad, picks up just shy of £2,000 after her eight-year-old finishes third in the day’s feature race. The first two places are occupied by horses from the Paul Nicholls and Philip Hobbs stables. One place behind is Peter Bowen’s runner, representing the booming Welsh scene.

Could Pipe ever contemplate becoming champion trainer against such fierce opposition? He says: “I always joke with Dad but I think National Hunt racing is as competitive as it’s ever been. There’s no such thing as a weak race now. You go to the sales and it’s a very strong market. It’s just the prize-money [that is poor].

“Yes, it would be very nice [to be champion trainer] but at the moment it’s not a realistic target, not with the firepower that Paul Nicholls and Nicky Henderson have. In five years’ time I may be stronger.” 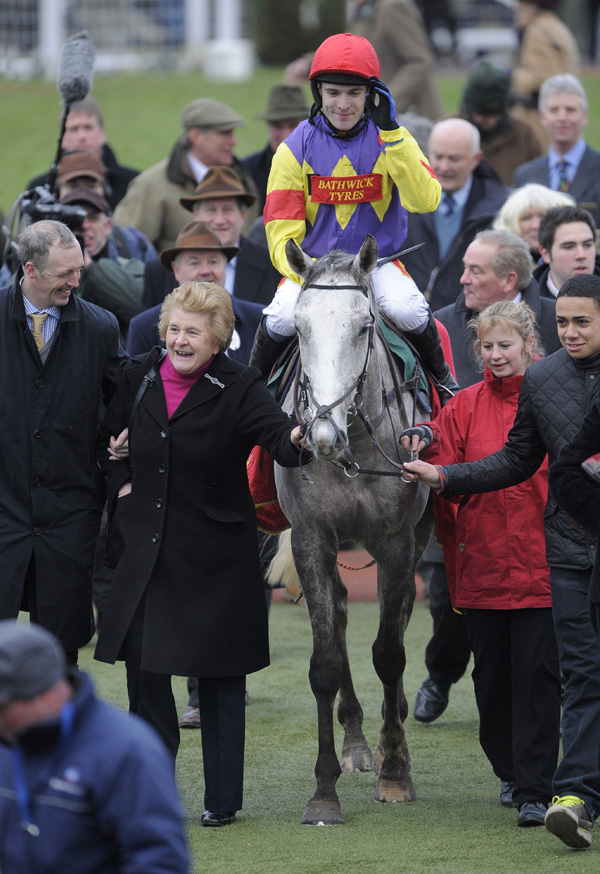 If Pipe is to ever topple Nicholls and co he’ll need more horses of the calibre of Grands Crus. The exciting son of Dom Alco’s stunning improvement saw him go from winning a handicap hurdle at Cheltenham’s Open Meeting in November, to giving Big Buck’s a real fright in the Ladbrokes World Hurdle at the Festival in March.

That first meeting with Big Buck’s – he later chased home Andy Stewart’s behemoth at Aintree – was built up in the racing press and the encounter didn’t disappoint, with the reigning champion holding off the young pretender by just under two lengths to claim his third victory in the race.
“For a couple of strides I thought we were going to win,” Pipe says. “But the other horse pulled out more. It’s great having a horse that can compete with Big Buck’s.

“We don’t want to finish second to him this year so we’re going novice chasing. His target is Cheltenham. He loves to race – perhaps a little too enthusiastically at times – but he’s only six, still improving and strengthening up. If we keep him in one piece he could end up being a Gold Cup horse.”

With those words, Pipe leaves the box to saddle his final runner of the day, American Art, in a selling hurdle for Brian Kilpatrick, who owned top-class chaser Sabin Du Loir. American Art makes it a happy end to proceedings for the yard after being left clear at the last to make it four wins on the bounce. The trainer is pleased.

“Winners are what it’s all about – whether it’s a selling hurdle or the Gold Cup – they all count as one,” says Pipe. “There’s a lot of pleasure in winning four races with American Art – that’s as good a piece of placing and training as getting Grands Crus to do what he did.

“With Grands Crus, I knew he was going to win at Cheltenham’s Open Meeting last year. That had been plotted since he finished second at Taunton in February. When you’ve got a young horse with potential, you’re always looking forward. That’s the fun part about racing.”

Times may have changed at Pond House, but the thirst for winners remains as strong as ever. 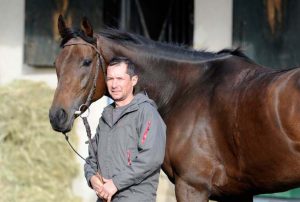 Up Next
A fond farewell