The Derby picture may be unclear for the Coolmore and Ballydoyle teams but they have a top-notch miler on their hands this season in the form of Gleneagles, who on Saturday added the Irish 2,000 Guineas to his victory in the Newmarket colts’ Classic three weeks earlier.

Once again partnered by Ryan Moore, the son of Galileo cruised through the race with ease but looked dangerously short of room with a little under two furlongs to run when attempting to overhaul the leading pack. A gap finally appeared in the final furlong to allow Gleneagles to stride past early leader Ivawood, who ended up finishing third after being passed close home by the strong-finishing Endless Drama.

The winner, whose sister Marvellous won last year’s Irish 1,000 Guineas, will now head to Royal Ascot for the St James’s Palace Stakes. His trainer Aidan O’Brien said: “What he showed me today that I didn’t see before is that he’s very brave.

“As well as being a fast horse, he had to fight today and he fought for three furlongs. And then in the last half furlong, Ryan had to say, ‘Come on, I need you again,’ and he did give it.”

Gleangles became only the eighth colt to land the English and Irish 2,000 Guineas and the third to do so for O’Brien after Rock Of Gibraltar in 2002 and Henrythnavigator six years later. 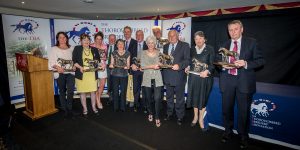 Up Next
National Hunt breeders honoured