International investment drove an exceptional first day of trading at the Tattersalls July Sale in Newmarket on Wednesday that featured rises in all key areas as well a new record top mark.

As anticipated, there was strong investment from buyers based in the southern hemisphere, notably Zhang Yusheng’s Yulong Investments which accounted for five of the top ten lots. In all, 23 lots realised six figures to contribute to a turnover of 8,735,785gns and an average of 38,826gns, up 55% from the corresponding day in 2021.

Leading the way was black-type producer Rihaam, for whom Tom Goff of Blandford Bloodstock went to 540,000gns, a figure which smashed the previous 12-year-old sale record of 460,000gns. Goff, who was taking instructions off Paul Shanahan, fended off online interest for the Shadwell-sold mare, a Dansili half-sister to the Listed winners Mudaarah, Sudoor and Ethaara from the family of Sheikh Hamdan’s top miler Bahri.

Rihaam’s second foal is the classy Ribhi, who has been Listed-placed for Marcus Tregoning, and she was sold back in foal to that gelding’s sire Dark Angel.

“Of her age group, she was the outstanding broodmare here,” said Goff. “It’s a fantastic Sheikh Hamdan family that goes back to Bahri – there’s numerous stars all over the page – and she’s a Dansili.

“Ribhi is rated 100 and she’s carrying a full brother to him. There is an Invincible Spirit two-year-old filly with Marcus Tregoning that is apparently showing some speed. And apparently the Blue Point yearling is a nice filly.

“So it’s a very good package and one that doesn’t come along too often.” 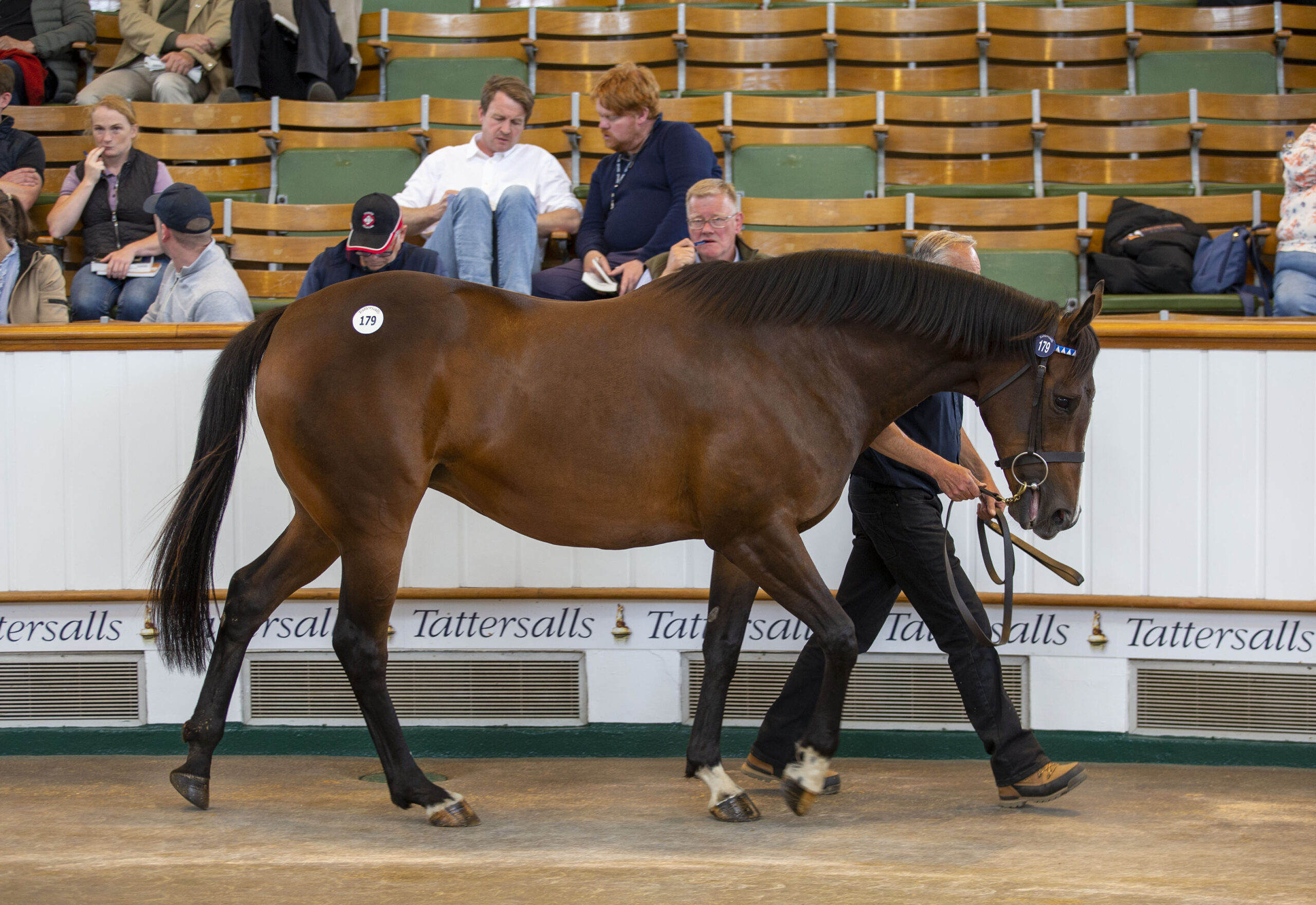 The previous sale record was also surpassed by the Group 3-winning Kendargent filly See The Rose, for whom James Wigan outbid Ajay Anne at 500,000gns on behalf of an undisclosed client.

See The Rose was trained by Andre Fabre to win three races as a two-year-old, led by the Group 3 Prix Six Perfections at Deauville. Since passing through the ring for 450,000gns last December, she has been in training with Joseph O’Brien and although unraced for her new trainer, that evidently did no harm to her value.

“I thought she was very elegant,” said Wigan. “I saw her when she was here last year. She’s been bought for breeding rather than racing and she’ll stay in this country.”

Outside the top lots, trade was underpinned by interest from  Yuesheng Zhang’s Yulong Investments. Buying alongside Michael Donohoe of the BBA Ireland, the outfit came away with xx mares worth a total of xx, many of them bought to support his Group 1-winning two-year-old Lucky Vega, who shuttles to the Irish National Stud.

The buying partnership made use of the online facility to strike a winning bid of 450,000gns for Shining Bright, a Galileo sister to recent King Edward VII Stakes winner Changingoftheguard offered by Barton Sales carrying her first foal by Starspangledbanner. They are out of the American Gr.2 winner Lady Lara (Excellent Art) and from the further family of Footstepsinthesand.

“Shining Bright will probably go back to Ireland and be covered by Lucky Vega next spring,” said Donohoe. “There was obviously a nice update to the pedigree at Royal Ascot and we have the two-year-old full-brother [Galileo’s Compass] too.”

Yulong also went to 340,000gns secure another daughter of Galileo in Footprints, a sister to the dual Group 2 winner Armory offered in foal to Wootton Bassett, and paid 260,000gns for Sweet Whisper (Lot 262), a Dubawi half-sister to champion Farhh.

“It’s been a busy day but I’m really pleased with the mares we’ve got,” said Yulong’s chief operating officer Sam Fairgray. “They’re by good stallions – Galileo, Siyouni, Kingman and Exceed And Excel – and from nice families and physically we really liked them too so we’re really happy with what we’ve got. Some will head to Australia, some will be bred up here to southern hemisphere time and then head down and others will stay here and visit Lucky Vega [next year]. 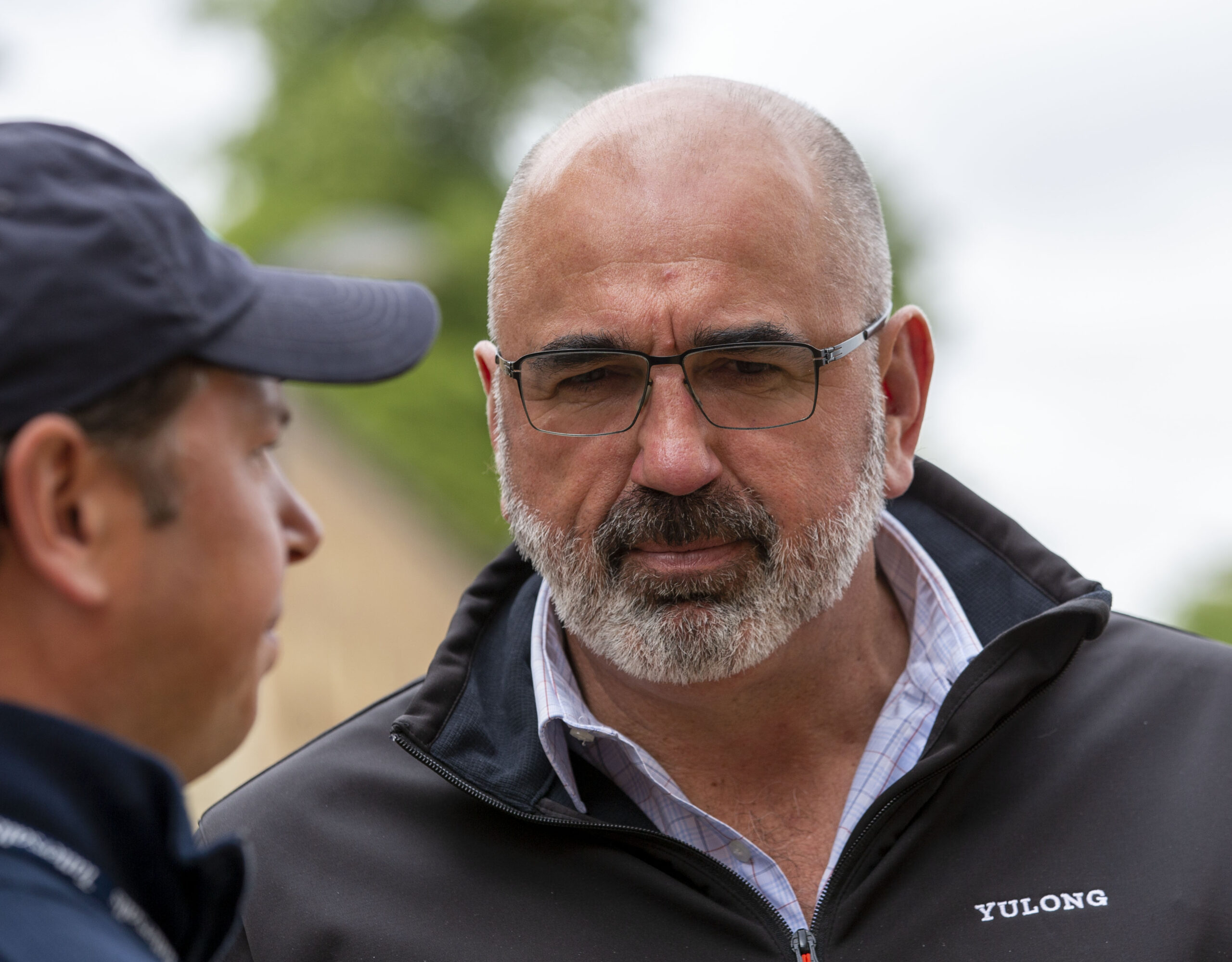 Sam Fairgray: it was a busy day for Yulong Investments. Photo – Tattersalls

“I’d imagine they’ll all make their way down to Australia in time but we want to support Lucky Vega. He had a fantastic first season here and we want to continue that support. I’d imagine a couple will be covered by Frankel before heading down but we haven’t decided which ones yet. We’ll sit down and work out where we go from here.”

He added: “Mr Zhang came here a few years ago and purchased Harlech, the dam of [Australian Gr.1 winner} Hungry Heart, so he saw that we should be back here to find the mares that we like.”

Sweet Whisper was the highlight of 11 six-figure lots to hail from the Godolphin draft; others included Cheradi, a Dubawi half-sister to Territories sold for 190,000gns to the Australian-based Brekenridge Ventures for 190,000gns, and First Smile, a winning Dark Angel daughter of Queen Mary Stakes heroine Jealous Again sold in foal to Profitable for 180,000gns to Tally-Ho Stud.

It also ended up being a busy day for Tom Goff, with the agent also striking at 200,000gns on behalf of Andrew Black’s Chasemore Farm for Group 1 winner Chachamaidee, sold in foal to Mohaather. Now a 15-year-old, the daughter of Footstepsinthesand won seven races for Tony Evans, notably the 2012 Matron Stakes at the Curragh on the disqualification of Duntle. At stud, she has been similarly successful, with her progeny including the Group 3 winner Klassique and recent Listed Ganton Stakes scorer Valiant Prince.

“I’ve bought her for Andrew Black’s Chasemore Farm,” said Goff. “They’re having a great year. They’ve got some really good stuff on the track at the moment, which is very exciting.

“We’ve followed this mare for a while and it’s a family we know well. I thought she looked amazing for her age and I like the cover. I think Mohaather is very exciting. I’ve seen a few foals by him and like them.

“I saw her Sea The Stars colt here last year as a yearling. He’s with Hugo Palmer, I’ve spoken to him and he likes him. So it’s a great package and we’re very excited to get her. Hopefully we’ll get some fillies out of her.”

The sale continues on Thursday from 9.30am. 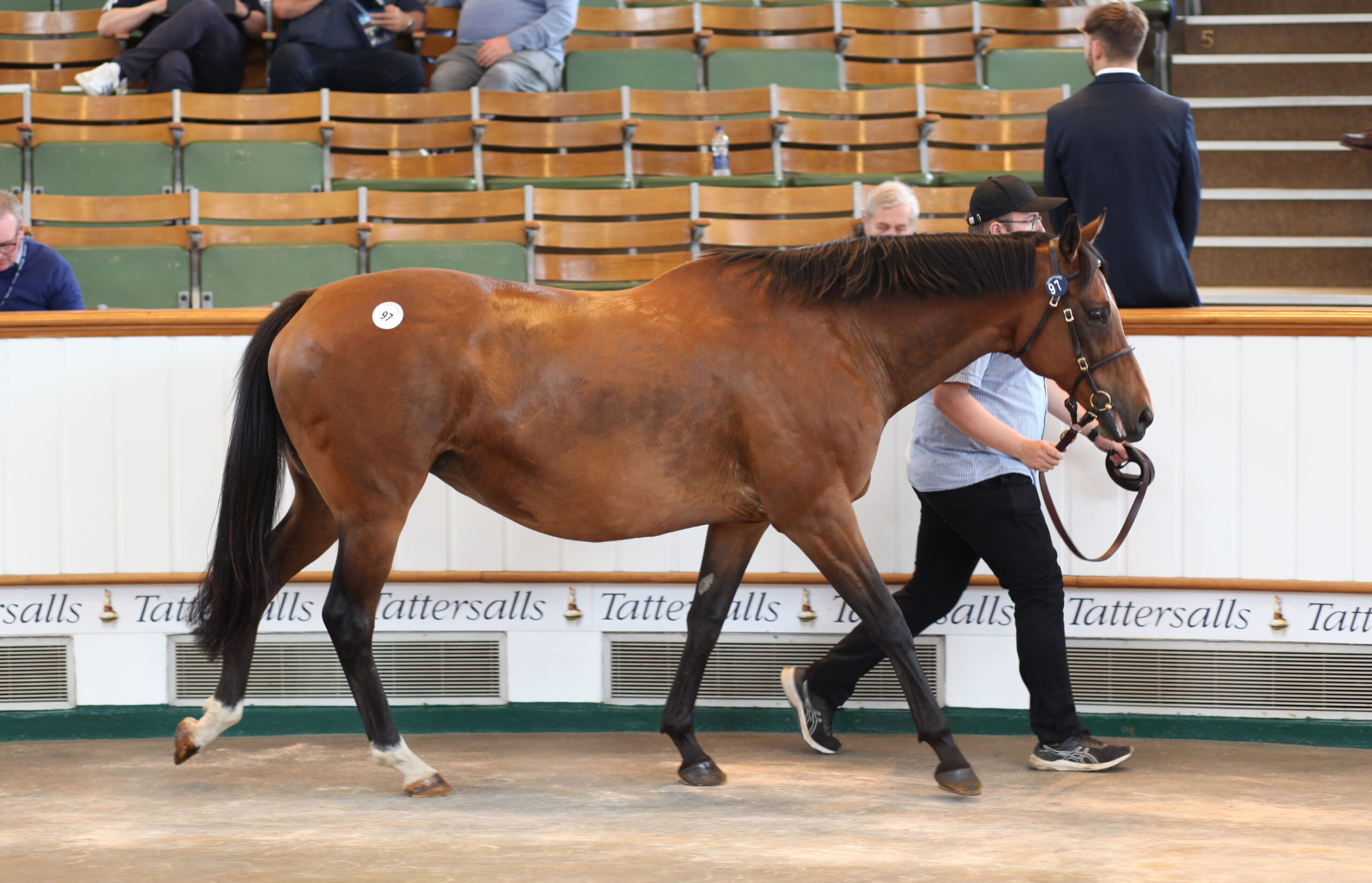 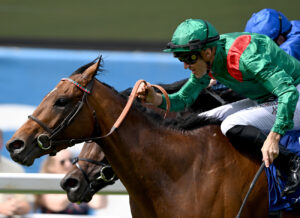