Gelding off the mark under rules with victory at Newbury

Gallyhill justified his lofty pricetag of £450,000 when rallying to score on debut under rules at Newbury on Wednesday for trainer Nicky Henderson, owner Mike Grech and jockey Nico de Boinville.

He was bought by Henrietta Knight on behalf of Grech for £450,000 at the Tattersalls Cheltenham December Sale in 2019 after the son of Getaway had won a four-year-old maidenpoint-to-point for Jamie Sloan at Kirkistown a month before he went through the ring.

The six-year-old was facing 14 rivals in the 2m½f novices’ hurdle that opened Newbury’s card at the Berkshire track and odds of 30/100f suggested that the betting market thought the youngster would win easily.

With Calgary Tiger rocketing off in front, Gallyhill was in the chasing pack and had gained significant ground to challenge the leader three flights from home.

After dispatching of Calgary Tiger, Gallyhill appeared to be cruising for home only to be shaken up by De Boinville as Robin’s Dream headed him after the last. But there was a gap left on the rail that allowed Gallyhill to regain the lead and win by a length and a qaurter.

Henderson said: “It was quite nasty out there and I couldn’t see very much, but Nico said he took a big blow and did well to get back in front. He’s a staying chaser and his next run will be run over two and a half miles.” 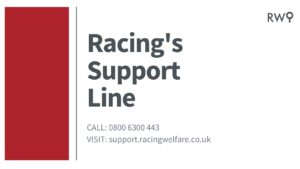 Up Next
Racing Welfare announces new partnership with Care first