Eighteen-time champion jump jockey AP McCoy recorded yet another milestone in his extraordinary career when driving Mountain Tunes up the Towcester hill to notch his 4,000th victory under National Hunt rules.

Fittingly, the win came in the green and gold colours of JP McManus, for whom McCoy has been retained rider since 2004, on a horse trained by his biggest supporter, Jonjo O’Neill.

Turning in for home, it looked as though the best the Northern Irishman could hope for was a placed finish but, as racing fans have seen so many times throughout his career, McCoy galvanised the four-year-old to an improbable first hurdles victory. His trademark never-say-die tactics  delighted the thousands of fans who had turned out to watch history in the making at the usually quite country track. Among them was McCoy’s father Peader, who had made the trip from Ireland to be present. The jockey’s three-month-old son Archie – who was also decked out in McManus’s colours – was also in attendance along with his wife Chanelle and daughter Eve.

Having received a rousing reception and been sprayed by champagne in the winner’s enclosure, McCoy said: “It couldn’t have happened any better. Obviously for Jonjo and for JP and Noreen, who have been fantastic to me. Also having Chanelle, Eve and Archie Peadar here is very important.”

He went on to dedicate the win to the father of his agent Dave Roberts, who died on Wednesday.

The most successful rider over jumps of all time, with 18 consecutive championships to his name, plus the champion conditionals’ title in 1995, McCoy was named BBC Sports Personality of the Year in 2010. He holds the record for the highest number of winners ridden in a season (289) and his major successes include winning the 2010 Grand National on Don’t Push It and the Cheltenham Gold Cup in 2012 aboard Synchronised. Both horses raced for McManus, while McCoy won his first Gold Cup for trainer Noel Chance on Mr Mulligan in 1997.

Having started his racing career under the tutelage of Flat trainer Jim Bolger, McCoy enjoyed a long and fruitful association with former champion jumps trainer Martin Pipe, their numerous combined successes including the Champion Hurdle with Make A Stand and Well Chief’s Arkle Trophy.

Leading lights from the sporting world were quick to pay tribute to the rider’s outstanding achievement, and, as a loyal Arsenal supporter, few will have pleased McCoy more than the words from Arsene Wenger, who said: “I would like to pass on my congratulations to AP McCoy for reaching this remarkable milestone. He has been at the top of his sport for a very long time – as long as I have been manager of Arsenal Football Club – and that shows fantastic consistency. He has come through a lot of injuries, and has shown great resilience to get to where he is. Everyone at the club is proud to know that AP McCoy is an Arsenal supporter.” 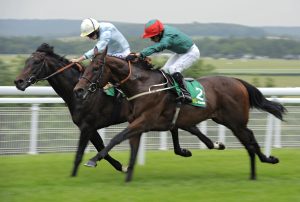 Up Next
Melbourne Cup stays at home