Allmankind reigns in Kingmaker for Skelton

Allmankind warmed up for tilt at the Sporting Life Arkle at the Cheltenham Festival next month with a dominant winning display in the Grade 2 Agetur UK Kingmaker Novices’ Chase at Warwick on Monday.

Assuming his customary position at the head of affairs under Harry Skelton, Bill and Tim Gredley’s homebred was always in control during the two-mile event and survived a minor blunder two fences out to race away for a 17-length score over Sky Pirate.

Now unbeaten in thee starts over fences, Allmankind was clipped into 7/1 in some places for next month’s Arkle. Last season’s Supreme Novices’ Hurdle winner Shishkin continues to head the market.

“He was just getting stuck in the ground a bit, it’s like glue, but he was brilliant,” Harry Skelton told Racing TV. “He’ll run through a wall for you, he’s a freak.

“He’s becoming more tractable. The prelims beforehand don’t really bother him but he comes alive when the tapes go up.”

Trainer Dan Skelton was also pleased and is looking forward to a clash with Shishkin and Energumene in the Arkle, where the prospect of livelier ground should play to his strengths.

“I was always comfortable with how he was going and tactically how the race was working out,” he told Racing TV. “In this ground, there weren’t that many big jumps to be had and he couldn’t get into a big, exuberant rhythm.

“One thing I learned about him today is that he can get into some positions near a jump and he can survive them, which is vitally important going forward. He’s also shown a good bit of stamina over two miles to go clear – I’ve got a lot of time for the second horse.

“The Arkle is going to be a very exciting race. Better ground will suit him and I’m really looking forward to it.”

Previously successful in the Grade 1 Henry VIII Novices’ Chase at Sandown Park, Allmankind is from the first crop of Lanwades Stud’s Sea The Moon and out of Wemyss Bay, a Sadler’s Wells sister to the top-class Beat Hollow.

On what was an excellent day for the Skelton team, the Alcester trainer later sent out Molly Ollys Wishes to win the Listed St Marys Land Warwick Mares’ Hurdle.

Much of the pre-race focus rested on David Cottin’s top mare Paul’s Saga, winner of the Grade 1 Grande Course de Haies d’Auteuil back in October, but she had no answer to Molly Ollys Wishes, who made all for a resounding 19-length success over the French raider.

It was a third successive win for the British-bred mare, whose current vein of form has come as a pleasant surprise to her trainer.

“It was a taking performance,” Dan Skelton told Racing TV. “To be honest, I’m a little bit shocked. I was excited to step her into Graded company but with the depth of today’s race, we were tempered a little.

“But she’s been brilliant this year, she’s found this vein of form and there’s no question she’s improving. I like the way that she’s relaxing in her races, she’s really staying the trip really well.”

He added: “Today has taken me by surprise, I don’t know that to do next with her.  She’s not entered in the Stayers Hurdle but something like the National Spirit, if that doesn’t come too soon, could suit.”

Molly Ollys Wishes is a daughter of Shade Oak Stud’s late stallion Black Sam Bellamy and was bred by K D & D K Pugh out of September Moon, by Bustino. 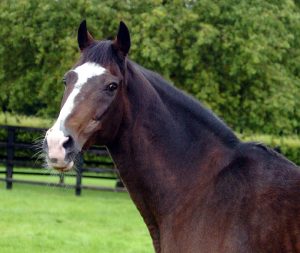 Up Next
Jumps influence of Sadler's Wells growing ever stronger