A colt by the rapidly ascendant Havana Grey headed the second session of the Tattersalls December Foal Sale in Newmarket on Thursday when sold for 250,000gns to pinhooker Philipp Stauffenberg.

Bred and sold by Whitsbury Manor Stud, the colt is a half-brother to classy sprinter Dragon Symbol, who was first past the post in last year’s Commonwealth Cup for Archie Watson.

“He was the one I wanted to get today,” said Stauffenberg. “I didn’t buy anything out of Havana Grey’s first crop but I liked them, and obviously he’s proven that he’s capable of producing a good horse. Hopefully they’ll go on. And this colt is a half-brother to a very good horse, a Group 1 performer.”

The pair are out of Arcamist, a winning Arcano half-sister to the Listed winners Smart Enough and Oasis Dancer.

“He has been nice all the way along,” said stud director Whitsbury Manor Stud. “He is probably a bigger model to Dragon Symbol, but Arcamist just keeps throwing lovely stock. It is a family we have done really well with and we have had for a long time – Dad bought the second dam Good Enough in the US around 25 years ago. She was the most expensive mare he’d bought ever at that time – it was around $250,000 and was a lot of money for us.”

He added: “We took the gamble to send a nice mare to Havana Grey in his third crop, but if we don’t believe in our stallions who else is going to?” 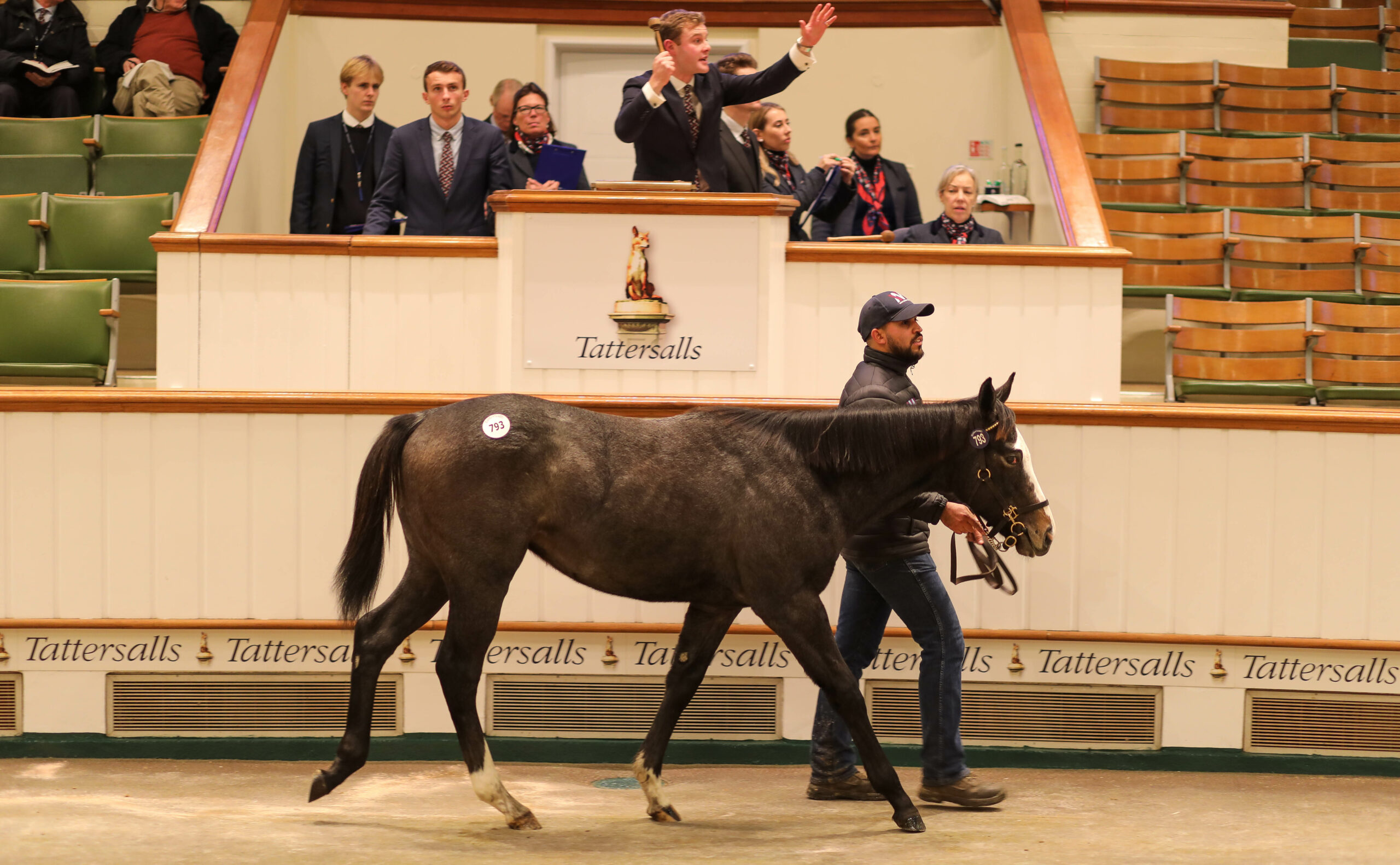 Peter and Ross Doyle have more reason than most to appreciate Mehmas having purchased the horse on behalf of Al Shaqab Racing back when he came up for sale as a breezer. The pair have signed for several smart sorts by the sire since then, notably Persian Force, and yesterday, they demonstrated their regard for the stallion once again when going to 240,000gns for a brother to the high-class filly Quatroelle, who takes her chance in tonight’s Grade 3 Red Carpet Stakes at Del Mar. The pair were bred by Rossenarra Stud out of Heavenly River, a placed daughter of Stormy River.

“As always it’s the physical and it’s a huge bonus that he’s by Mehmas,” said Ross Doyle, signing on behalf of an undisclosed client. “He’s from a very good nursery in Rossenarra and is closely related to a very good filly. I thought he was an absolute standout.

“He had a lot of strength for his age; he’s naturally very strong with a good deep girth and he was a real pro for every show. That’s his dad’s influence coming through. He might come back [for resale] but I’d say long-term they’ll race him.”

He added: “Mehmas has obviously been very lucky for lots of people including ourselves. We bought Persian Force last year for Amo Racing. We’ve had massive pleasure out of Mehmas and so have so many people, going right back to John Cullinan and Roger Marley in his breeze-up days, then at Richard Hannon’s yard, and all the staff there were mad about him. They used to say to me that he’d go the races, come home, go for a pick of grass and put on weight. Then he ended up at Tally-Ho, which is one of the best studs in the world, and they’ve done a wonderful job with him.”

Rossenarra’s John McEnery takes up the story. “We bought her out of Karl Burke’s yard,” said McEnery. “I had gone home early and I left my nephew Billy here to look at a few pedigrees and he picked her out. She was a maiden mare at the time.

“We’ve always liked the Mehmas foals and we’ve had a bit of luck with him. We’d also been lucky with Dark Angel [also by Acclamation out of a Machiavellian mare]. I hope the filly [Quatroelle] wins tonight because it’ll give the next man a bit of luck as well.” 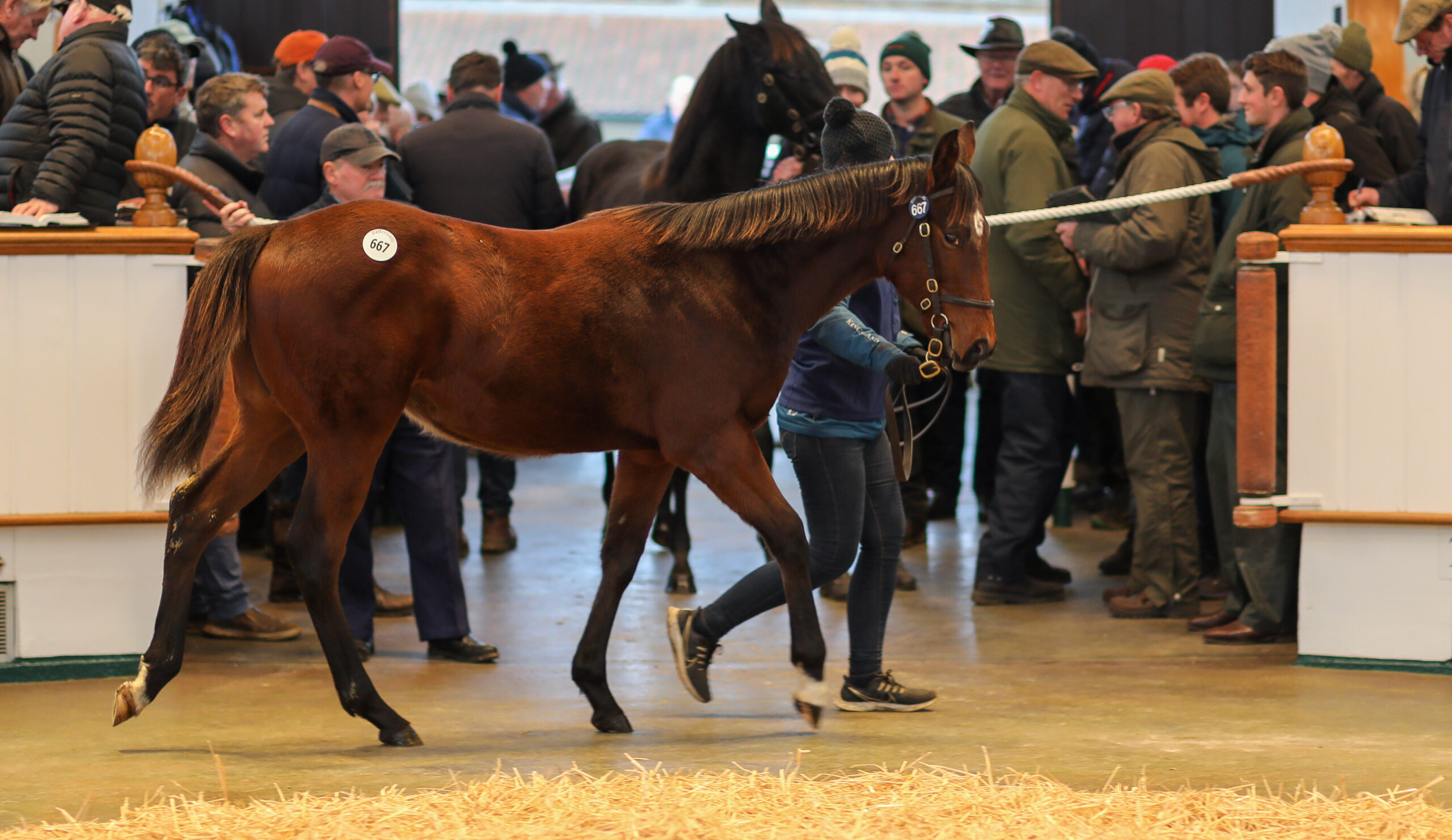 Peter and Ross Doyle signed at 240,000gns for this Mehmas colt. Photo – Tattersalls

The Doyles also went to 110,000gns for a first-crop son of Darley’s Ghaiyyath bred by GCE Farm and sold by Yellowford Stud. The colt is the second foal out of Stella d’Italia, a relative inexpensive 22,000gns purchase by ‘Sunny Days’ at the 2019 Tattersalls December Sale. The Sea The Stars mare is a close relation to champion Dubai Millennium and direct descendant of blue hen Fall Aspen.

The popularity of Ghaiyyath has been a trend of the past two weeks and that continued into the evening as John Cullinan and Roger Marley, signing as J R Bloodstock (aka John and Roger), went to 240,000gns for a half-brother to the Group 3-placed Harrow from Kellsgrange Stud.

Bred by Ballyreddin Stud and Dcl, the colt is out of the winning School Run (Invincible Spirit) and from the further family of Dream Ahead.

“I saw the horse yesterday and loved him,” said Cullinan. “We were keen to buy a Ghaiyyath. He was a brilliant racehorse, by a sire of sires and they look like very good stock. So he was one of the stallions on our mind and we tried hard to get one at Goffs.

“This colt vetted very well. Nice horses are very hard to come by and you have to give a little bit more for the ones you want.

“Hopefully, he’ll come back to one of the premier sales. For now, we’ll try to keep him safe and sound, and keep him out of trouble!”

He added: “The market is very selective. You’re up against some of the smartest people in the world at their job, and we’re all landing on the same ones. It’s likely to be be very strong tomorrow so we thought we’d better get stuck in today.”

Among the other first-crop sires, there was also a good result for Haras d’Etreham’s Persian King courtesy of a colt out of the Classic-placed Qabala who sold for 130,000gns to the Fairway Partners with a view to reselling next year.

The Clipper Logistics – Joe Foley axis has already enjoyed success with New Bay thanks to the promising two-year-old Overruled and they will hoping that lightning can strike twice after going to 150,000gns for Norelands Stud’s colt out of the Listed-placed Moorside. Beaten only half-a-length when second to Somehow in the 2016 Cheshire Oaks, the mare hails from the immediate family of Zafonic and Zaizafon.

“He’s by an exciting, emerging sire in New Bay,” said Foley. “We have a two-year-old by him that we like a lot with Karl Burke called Overrule, who won well recently at Redcar.

“This is a beautifully active colt with a good attitude. He’s also very interestingly bred being 4×3 to Zaizafon [dam of Zafonic and Zaizafon] and 4×3 to Gone West. The mother is by Champs Elysees and she stayed, but he has a lot of speed in his make up and physically he looked a fast horse. We were very keen to get him and delighted we did so.”

The colt is the third foal out of the mare following a two-year-old gelding and yearling colt both by Invincible Spirit.

On a day when trade stepped up a gear, the pinhookers were unsurprisingly out in force, in particular the O’Callaghan family’s Yeomanstown Stud, which paid 100,000gns apiece for colts by New Bay and Showcasing.

Tweenhills Farm and Stud sold the New Bay colt, who is out of the Italian Listed winner Strawberry Martini, while the Showcasing colt provided a landmark moment for breeder Natton House Thoroughbreds as the operation’s first ever six-figure sale.

The latter is only the second foal out of the well-related Slade Power mare, who joined Natton House when purchased for just 22,000gns as a three-year-old filly in training from Godolphin at the 2019 Tattersalls February Sale. The mare is out of champion two-year-old Embassy, herself the daughter of another champion two-year-old in Pass The Peace – both won the Cheveley Park Stakes.

“We bought the mare as a three-year-old from Godolphin for 22,000gns here at the February Sale,” said Chris Dudfield of Natton House. “She was tiny at the time but has grown well since and her first two Showcasings have been beautiful foals.

“Last year’s foal made 72,000gns but this horse was even nicer and some of the lads said he is flawless,” said Dudfield. “He is just a beautiful horse. It is a fantastic result for us. The team have worked so hard and we are thrilled.”

He added: “The mare has got an amazing pedigree – there are ten Group 1 winners on the page and three champions. Why wouldn’t you want to own her? We bought her specifically to go to Showcasing – we have breeding rights in him – and she is back in foal to him.”

With some of the better foals stacked towards the end of the session, trade picked up throughout the day to the extent that rises were recorded across-the-board against last year, with 223 foals selling for a total of 9,449,000gns and average of 42,372gns, up eight per cent. The median rose by seven per cent to 32,000gns.

The foal sale continues tomorrow from 10am. 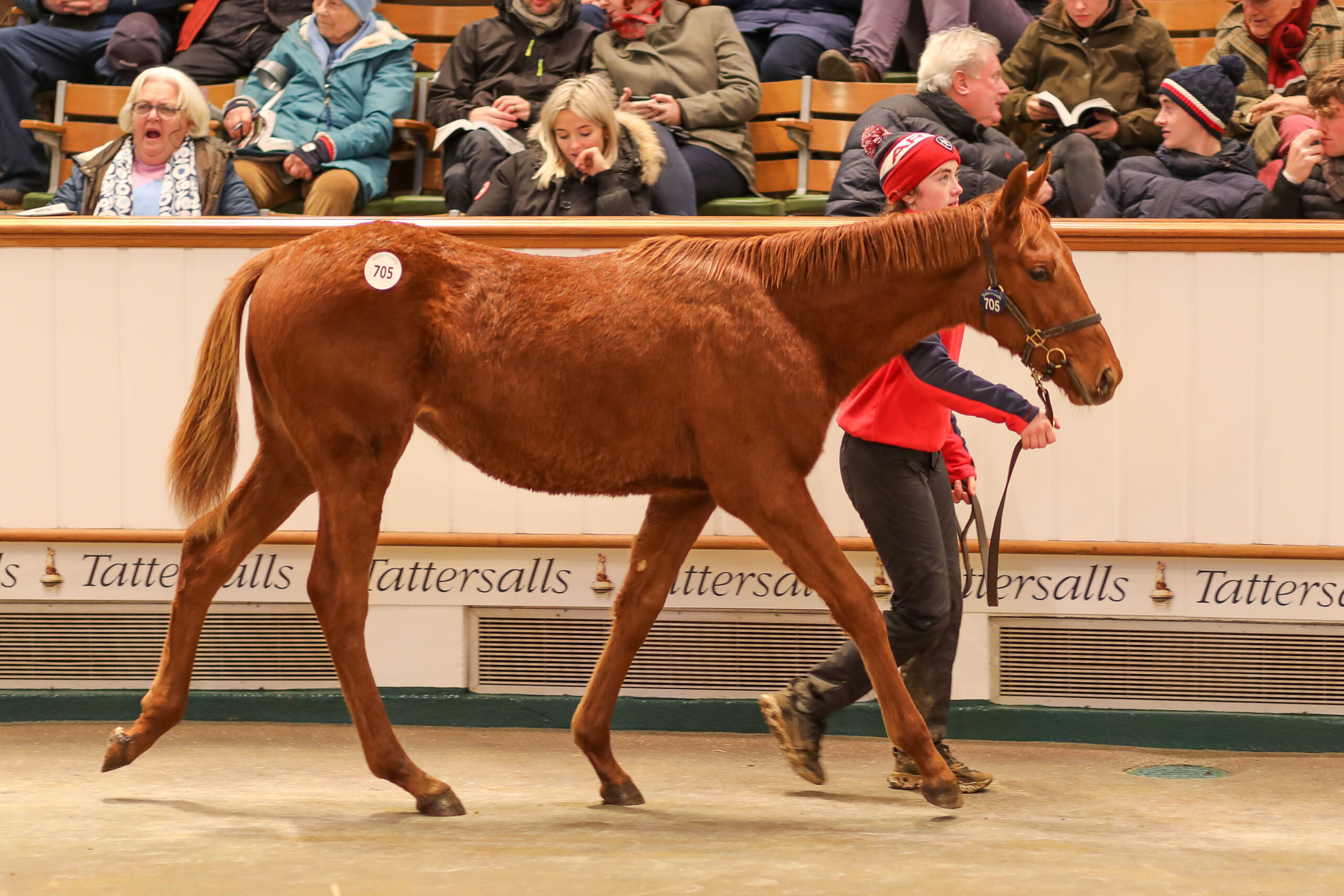 This Ghaiyyath filly was one of nine purchases made during the day by Tally-Ho Stud. Photo – Tattersalls 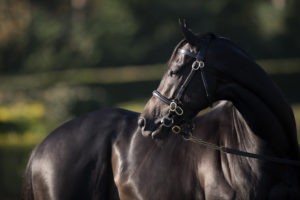 Up Next
Young sires popular at Tatts December Foals opener