Dettori to lose out on big-race rides
Stories

The night before racing we stay in a hotel close to the racecourse and I raid the breakfast buffet on my way out. I’m on the course by 7am, which gives me two and a half hours in make-up. Just to be sure I’m presentable! In all seriousness, the build-up to The Opening Show is all about rehearsing.

Afterwards, we have about three hours before the racing programme and that’s when I chat to trainers and jockeys as they arrive. We also do pre-records, which are good fun as I am chatting again with the horses’ connections.

On the way home after racing I always speak to Paul Cooper, my producer, to discuss any cracks that may have appeared in the show. It’s useful to talk to Paul so I have his views on board when I get home to my flat in London and watch the programme right through.

I know that sounds sad on a Saturday night when most people are out gallivanting. But I am always looking for faults to correct so I can improve myself professionally.

On mornings when I am not working I have Coco Pops or toast for breakfast and often go to the gym afterwards. I trained for a charity boxing match earlier in the year but my trainer wouldn’t have been happy if he knew Coco Pops was in my diet!

It would be wrong to say I ‘enjoyed’ that fight, but it was certainly a good experience – even though I ended up with a broken nose. I raised money for Well Child, for sick children, and have been invited to box in another celebrity event in October.

My trainer wouldn’t have been happy if he knew Coco Pops was in my diet!

Much of my spare time at the moment is spent producing a children’s book about racing. Recently I went to France and did quite a bit of writing there. The book hasn’t got a title or publisher yet, but I am enjoying the challenge.

It is my responsibility to make sure people who start their weekend by tuning into The Opening Show enjoy the programme. I feel responsible because in a way, the show’s my baby.

Working with Luke Harvey and Matt Chapman keeps me on my toes; with them cackling away it’s fun. We are all good pals, but Luke is my best mate at work and neither of us takes life too seriously.

On the live afternoon programme I get to speak to owners, trainers, jockeys and stable staff, which still gives me a big thrill. Interviewing this year’s Derby-winning connections was a real buzz as well.

Of course, there are people who watch racing and want to engage with us. I am very much aware of the importance of connecting with the public. We need to support each other because we need each other. My dad, the broadcaster Rupert Bell, and uncle, trainer Michael Bell, have been great allies and are always there to answer any questions I have.

I accept it was deeply unprofessional to run on to the track after my uncle had won the Gold Cup at Royal Ascot last year with Big Orange. I still have the mickey taken about the incident, which caused the Queen to ask who the lunatic was that chased the winner out on the course. An unforgettable day.

The television team is provided with packed lunches on the course so it’s a sandwich and on with the job.

I don’t bet a lot. I once went through the card at Yarmouth but they were all favourites. My biggest win came as a semi-professional poker player. Poker was my vice in my younger days and I used to play in some big tournaments, once winning £30,000.

I presented racing for three years in Australia, where I also played for a semi-professional football team in Sydney. This summer I have been enjoying some cricket, playing in the Cricketers Cup.

When I was in Australia I learned to cook during a period when my flatmate won a television cookery competition and he taught me a few culinary delights.

So now I can make a mean shepherd’s pie and that’s often washed down with a pint of cider while I watch Love Island. I have to admit I’m a big Love Island fan.

Bed is at 10pm and I usually take a book with me. I have just read The Subtle Art Of Not Giving A F*ck. A seriously interesting psychological book. 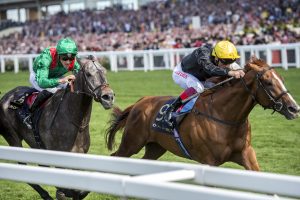 Up Next
Dettori to lose out on big-race rides