I’m an early riser and get up around 6.15am. I’ve always liked my sleep but since my daughter Evie was born in July, I’ve not had a full night’s sleep at home. She’s changed everything.

In truth I’m quite bad at eating breakfast so it will often just be a coffee, sometimes fruit or cereal, before heading to the BHA office in High Holborn.

My role is Operations Director of British Champions Series & Great British Racing International. At BCS we work closely with the racecourses – luckily the commercial structure of the organisation makes that eminently possible because the company is actually owned by the racecourses that participate in the Series.

This will be the eighth Champions Day, the culmination of Champions Series, which has been a huge success. Champions Series had two clear aims when it was set up; commercial and promotional.

When we started Champions Series, the value of the races was £11 million. Eight years down the line it’s over £20m. The series has enabled us to bring in racing’s biggest ever sponsorship deal with QIPCO.

From a promotional perspective, we have over 600,000 social media followers – the most-followed racing platform globally.

I accept that hardened racing fans don’t need to be told that Group 1 races are special but for the wider audience, for us to differentiate our best product from the rest, it’s really effective.

Last year we had 153 million Twitter timeline deliveries of our hashtag on Champions Day.

The Champions Stakes is now worth more on its own than the entire Champions Day card when held at Newmarket, the centrepiece of a day worth £4.35m with four Group 1s, a Group 2 and a £250,000 handicap, broadcast to over 100 territories.

The best compliment I’ve had about Champions Day is that the atmosphere was akin to the people’s Sunday at Wimbledon and that is 100% what I’m aiming for – elite sport but open to the masses.

I want people to attend because they think it’s going to be a wonderful sporting occasion and leave feeling they want to be a racing fan.

I’m lucky in that I’m sometimes asked to represent BCS or GBRI overseas, such as at the Asian Racing Conference in Seoul, South Korea, which I attended earlier this year.

I’ve just returned from China and Inner Mongolia, where Mr Zhang, the man behind Yulong Investments, has built a sales complex and a racecourse.

Visiting China was fascinating – there’s no gambling and the racing is dominated by a few wealthy owners. However, there’s huge appetite for the sport and they’re keen to have a domestic industry. The scale of it could be immense.

In truth, I’m basically a failed jockey. Had things gone well I’d have enjoyed a long career in the saddle but I was too tall, too big, with a bad back – probably my biggest drawback was a fundamental lack of talent.

Though I learnt to ride at a young age, the thing that really got me interested in racing was going to Leicester racecourse with my dad, a GP, where he was a doctor.

He’d take me there during school holidays and entrust me to the tote lady.

I worked in racing yards for three years after finishing my A-Levels and rode as an amateur – I’d ride anything for anyone. In the five years I rode consistently, two of which were spent at university, I had five winners and over 100 rides.

My favourite memory from those days is the first time I sat in the weighing room at Cheltenham, throwing my bag down, looking up and seeing the names of Charlie Swan and Istabraq repeated on the wall above the pegs.

I remember thinking then it was something very special. My worst memory was failing to win a two-runner race in which my rival fell three times.

After I finished riding, I completed the BHB Graduate Scheme, worked briefly at Newmarket racecourse, then moved to the Jockey Club in London, before joining the BHB, working up to Corporate Projects Manager.

One of my last jobs was as part of the team that set up Champions Series, so I’ve been involved from the very start.

As for the highlight so far, Frankel’s Champion Stakes farewell was amazing – I suspect I’ll never have the opportunity to work on another sporting event that is as close to people’s hearts.

My primary pastime now is being a dad, which I love. I’ve always enjoyed all sport but my biggest passion outside racing is snowboarding.

Before I got married, every spare penny and every spare moment went on snowboarding. I’ve been all around the world but my favourite place is Val d’Isere.

When I’m in the office, lunch is usually leftovers from the night before. While I try and eat healthily, I’m also a massive chocoholic – my bottom draw is stuffed full of chocolate – so I try and go to the gym most lunchtimes to keep in shape.

I enjoy cooking and prefer it to watching TV. I’ll crack open a beer, put some music on and make something like pan-fried duck breast with plum and red wine sauce, or a Thai curry.

My biggest passion outside racing is snowboarding

My wife, Amanda, is Australian so we also enjoy a barbecue with friends.

I used to go to bed early, around 10pm. Bedtime is now whenever we can get Evie to go down, which could be as early as 8.30pm – safe in the knowledge that it won’t be an uninterrupted night’s sleep. 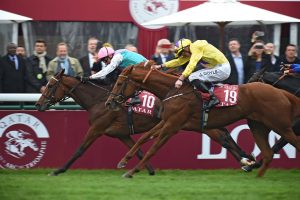