I’m naturally an early riser with my alarm going off at 5am. I always have a cup of tea first thing and coffee later on. I don’t normally bother with breakfast, but at Kelso, after walking the course and completing the necessary going updates, I return to my bed and breakfast lodgings for a boiled egg.

Jack, my 12-year-old long-haired Jack Russell, is with me all the time and has become quite a celebrity. He went missing for ten days at Cartmel a few years ago. There was a poster of him in every Cartmel shop window, pictures on the front of the local papers and he even had his own Facebook page.

Everybody was looking for him. Now everybody in Cartmel greets Jack like a long lost friend!

On any raceday at the three courses where I am Clerk of the Course – Cartmel, Kelso and York (assistant) – the first thing to take on board is the weather forecast.

This summer’s long hot spell had a significant bearing on the cooling of horses, and people, and the necessary facilities had to be in place.

With the consistent heat we also had to know how much evaporation we were getting from the watering and the water supply. In complete contrast, we can be laying frost covers on any vulnerable areas at Kelso.

The challenging part of the job is playing the weather

Every day is different, be it at Cartmel, Kelso or York. But there is a general routine every clerk must follow. After walking the course on a race morning we have to report the going by 6.40am and put it online on the BHA admin site so the news agencies and press can pick it up. I also use twitter and texts to keep trainers in touch with weather and conditions.

I always walk each course twice on racedays and twice a day during the run up to meetings. At Cartmel sometimes three times as it’s a summer jumps track, which we water a lot when necessary.

When Cartmel and York clash in May and August, Ed Gretton, formerly of Bangor and Chester, steps in at Cartmel.

Each course boasts its selling points. At York we have world-class international Flat racing; Kelso is a proper winter course with good prize-money; Cartmel offers the charm of summer jumping at the prettiest racecourse in the country.

Until this year I was riding and schooling regularly

The challenging part of the job is playing the weather. The most enjoyable was watching Frankel win the Juddmonte at York. Apparently it was impossible to get on to the platform at Malton station as there were so many people trying to catch the train to come and see him.

Plenty of our died-in-the-wool jumping enthusiasts travelled from Kelso to join the Frankel fan club. Frankel’s split times were so fantastic I believe he could have won over any trip.

I am jumping born and bred – Dad [Peter Beaumont] won the Gold Cup with Jodami and I beat the professional jockeys over the Grand National fences on JJ Henry in 1991.

My happiest family memory was coming home in the horsebox after Shannon Silver – bred and owned by Dad, ridden by my son Henry and trained by me – had won at Corbridge.

No one was prouder than Dad. He’d bred the lot of us!

I play tennis on holiday, when I usually manage to read four books

Until this year I was riding and schooling regularly and intend to get back to it. On holiday in Uruguay last month I was riding again and this winter I hope to grab a day or two hunting at home in North Yorkshire.

I don’t have much leisure time; I did the Great North Run a few years ago, but haven’t run a step since. I play tennis on holiday, when I usually manage to read four books a week. I particularly like the Jack Reacher novels.

I enjoy cooking for Henry and my partner, Chris Leigh. My signature dish is marmalade chicken, which involves chicken, mint and marmalade. It sounds bizarre but is very nice.

Generally bed is around 9pm and I take up a decaf coffee with the Sunday papers, which last me a week. I am a shocking sleeper and when I lie there thinking about various things I’ll get up and make a cup of tea.

I find myself listening out for rain or looking to see if there’s any frost or snow.

At York, if the weather is changing dramatically, we might have a WhatsApp conversation in the middle of the night between Chief Executive William Derby, Adrian Kay, the head groundsman, and myself. An unusually early start to the day! 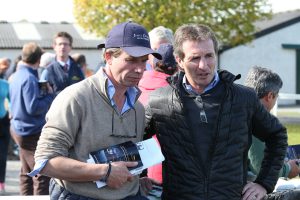 Up Next
Norman's still stormin'