Centuro brought up the landmark in dramatic style

Jonjo O’Neill – the master of Jackdaws Castle – was left celebrating last night after notching the 2,000th winner of his training career.

The 64-year-old is fondly remembered for being associated with some of the best National Hunt horses in history as a jockey and has continued that success into his training career.

A two-time champion jockey, in the saddle he partnered the incomparable Dawn Run to victories in the Champion Hurdle and the Cheltenham Gold Cup, a feat yet to be matched.

The American-bred Sea Pigeon, one of the most popular horses of the late 20th century gave O’Neill a day never to forget when taking the 1980 Champion Hurdle. The duo saw off old adversary Monksfield who had beaten them in the previous two renewals of the two mile feature.

Since taking up the reins at Jackdaws Castle in the heart of the Cotswolds in 2001, O’Neill has become one of the leading National Hunt handlers in the land. Into his 15th season at his current base, O’Neill has saddled numerous top-flight winners for the yard’s owner and long-time friend JP McManus.

He is one of the leading trainers at the Cheltenham Festival with 26 wins accrued so far. The most significant of those came when Synchronised stormed up the Cheltenham hill under 20-time champion jockey AP McCoy to seal his first Gold Cup as a trainer.

The Castletownroche-born handler was to provide McCoy with a long awaited breakthrough success in the race that stops a nation, the Aintree Grand National in 2010. The son of Old Vic made it an emotional 15 times lucky for McCoy who had only managed three-third place finishes in the race before.

O’Neill said on twitter: “2,000 is a nice landmark, every winner is very special! Couldn’t have reached it without support of a brilliant owners, jockeys and team!”

2,000 is a nice landmark, every winner is very special!

It turned out to be one of the luckiest winners of his career as leader Red Hot Chilly unseated Robbie Dunne a matter of yards from the winning post. It left victory in the hands of Coleman who to all intents and purposes looked booked for the runner-up spot.

Speaking after Centuro’s win, the trainer’s wife Jacqui said: “It’s brilliant a great moment for everyone we are absolutely delighted. And I’m pleased it was a horse owned by the Bond family as they have been great supporters of ours over the years.” 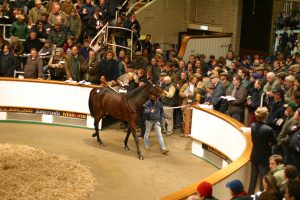 Up Next
Book 2 breaks more records at Tatts