“Eight two-year-olds selling for 100,000gns or more and a record sale turnover reflect the strong demand at the top of the market and as ever there have been some notable pinhooking triumphs, but the most pleasing aspect of the sale has been the record equalling median which demonstrates real depth to the trade from start to finish”

Tally-Ho Stud were once again to the fore at the Tattersalls Guineas Sale in Newmarket on Thursday on a competitive day of trading that resulted in record figures across-the-board.

“Significant increases in average, median and turnover are the mark of a very solid renewal of the Tattersalls Guineas Breeze Up Sale, especially when combined with a highly creditable clearance rate in excess of 80%,” said Tattersalls chairman Edmond Mahony. “The domestic British and Irish demand at all levels of the market has been matched by diverse international participation which has become the hallmark of this fixture. European buyers, particularly from Italy and Spain, have made a major contribution and they have been joined by buyers from South East Asia and the customary strong contingent of buyers from the Gulf region.

“Eight two-year-olds selling for 100,000gns or more and a record sale turnover reflect the strong demand at the top of the market and as ever there have been some notable pinhooking triumphs, but the most pleasing aspect of the sale has been the record equalling median which demonstrates real depth to the trade from start to finish. The consignors have supported the Guineas Breeze-Up Sale strongly and it has been great to see the buyers respond accordingly, clearly encouraged by the sale’s reputation as a consistent source of Group 1 winners. The horses in training section of the sale also continues to thrive and the record turnover, huge rises in average and median and a clearance rate in excess of 90% have contributed to unprecedented combined turnover for the Tattersalls Guineas Breeze Up and Horses in Training Sale.” 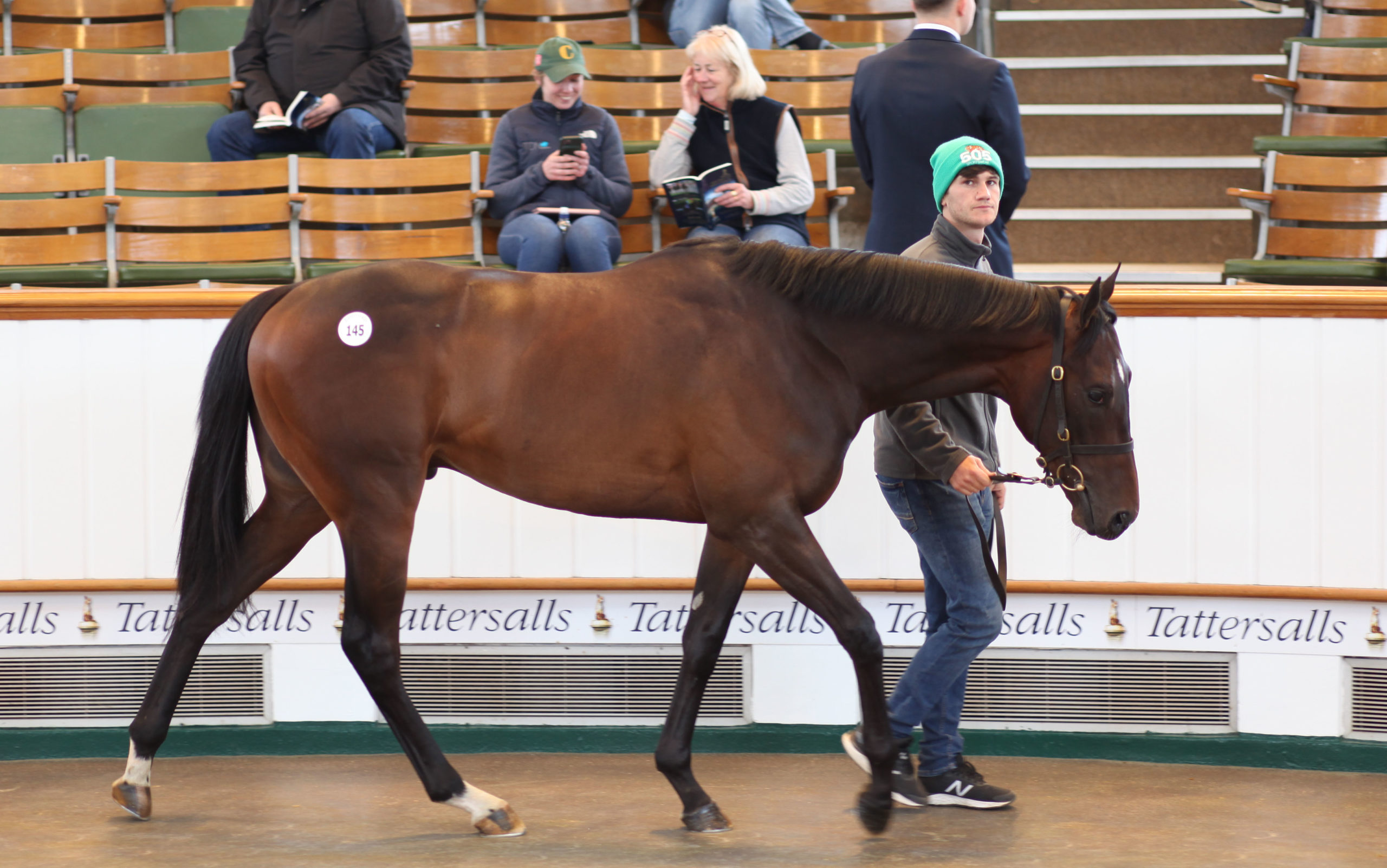 This Time Test colt will be trained by Michael O’Callaghan. Photo – Tattersalls

As at the preceding Tattersalls Craven and Goffs UK Doncaster Breeze-Up Sales, Tally-Ho Stud ended proceedings as leading vendor, their turnover of 403,000gns highlighted by the sale of a Time Test colt for a sale-topping 160,000gns to Michael O’Callaghan.

O’Callaghan has more reason than most to appreciate the value of the breeze-up sector as the purchaser of a number of good breezers over the years, notably the Classic-placed Now Or Never and last year’s Cornwallis Stakes winner Twilight Jet from Tally-Ho Stud. And yesterday, he returned to the well, coming out on top over Federico Barberini at 160,000gns for the Time Test colt. The youngster, who is the first foal out of the winning Galileo mare Luna Mare, had been pinhooked by Tally-Ho for 65,000gns out of Book 3 of last year’s Tattersalls October Sale.

“We thought he did one of the better breezes of the sale and he has a nice pedigree, he’s out of a Galileo mare,” said O’Callaghan. “He’s probably one of the best physicals in the sale. Hopefully he’s useful. He might be one for 7 furlongs but he looks forward enough to be starting in three to four weeks.

“This is the first Time Test I’ve had. He’s started well and I really like the look of them.”

He added: “Last year, I’d bought more breezers by this stage. But we keep tipping away and try to get the two-year-old numbers up as well as getting a quality bunch. I bought more of a spread of horses last year but this year, I am trying to buy more of a quality animal.”

Just months after failing to sell for €16,000 at the Goffs Sportsman’s Sale, John Nolan’s faith in his Mehmas filly was finally vindicated as she sold for 150,000gns to Alessandro Marconi.

The filly, a half-sister to two winners out of the winning Bertolini mare What About Me, turned in an excellent breeze on Monday to prompt Marconi to believe she was the best horse in the sale.

“She was the pick of the sale,” he said. “She’s for a new buyer from Dubai. Mr Nolan is more experienced in the game than myself and she came well recommended by him.

“She did an impressive breeze. Time isn’t everything, it’s also how they move and gallop out, and she was very impressive. And she’s by a great sire – we like those speedy, precocious sires.”

Marconi added that the filly would stay in Britain although trainer plans had yet to be confirmed.

Tom Whitehead of Powerstown Stud has long targeted the BBAG September Sale as a stop on his autumn yearling sales circuit, a move that once again reaped dividends on Thursday when his Soldier Hollow colt sold for 130,000gns.

Whitehead paid just €28,000 for the youngster, whose dam Loyalty is a winning Lando to Deutsches Derby winner Lucky Speed, at last year’s sale. Whitehead was keen to stress that the colt had thrived physically since then. However, also helping his cause was a stylish gallop during Monday’s breeze show on the Rowley Mile, all of which prompted Stuart Boman of Blandford Bloodstock to stretch to 130,000gns.

“He is a lovely horse and will go to Joseph O’Brien,” says Boman. “He is a gorgeous individual, he was bought at the BBAG Yearling Sale very well by Tom Whitehead; it was actually the day everyone got stuck in the hotel due to the fire the night before. Tom missed the fire and bought the horse. I had to come back and buy the horse this year.

“He breezed very well, he is very quick for a stayer as he is a horse bred to get a 1m4f, so he showed a lot of speed. Sometimes a horse does go to too quick for its pedigree, but it is all a matter of opinion, and weighing things up – he did a particularly good time for stayer, but a top 40 time, not a top five time.

“We are not buying simply on time, a good stride length and a number of things about the horse are important.”

As for Whitehead, it continued a good run on the breeze-up circuit that began in March when he topped the inaugural Goffs Dubai Sale with a Curlin colt who sold for the equivalent of €620,000.

“He’s out of a half-sister to a German Derby winner and by a champion stallion – what’s there not to like about him?” said Whitehead. “He’s a lovely horse. He’s got a good action, good colour and a good mind. He’s just got a lot of quality, and he’s done really well since I got him.” 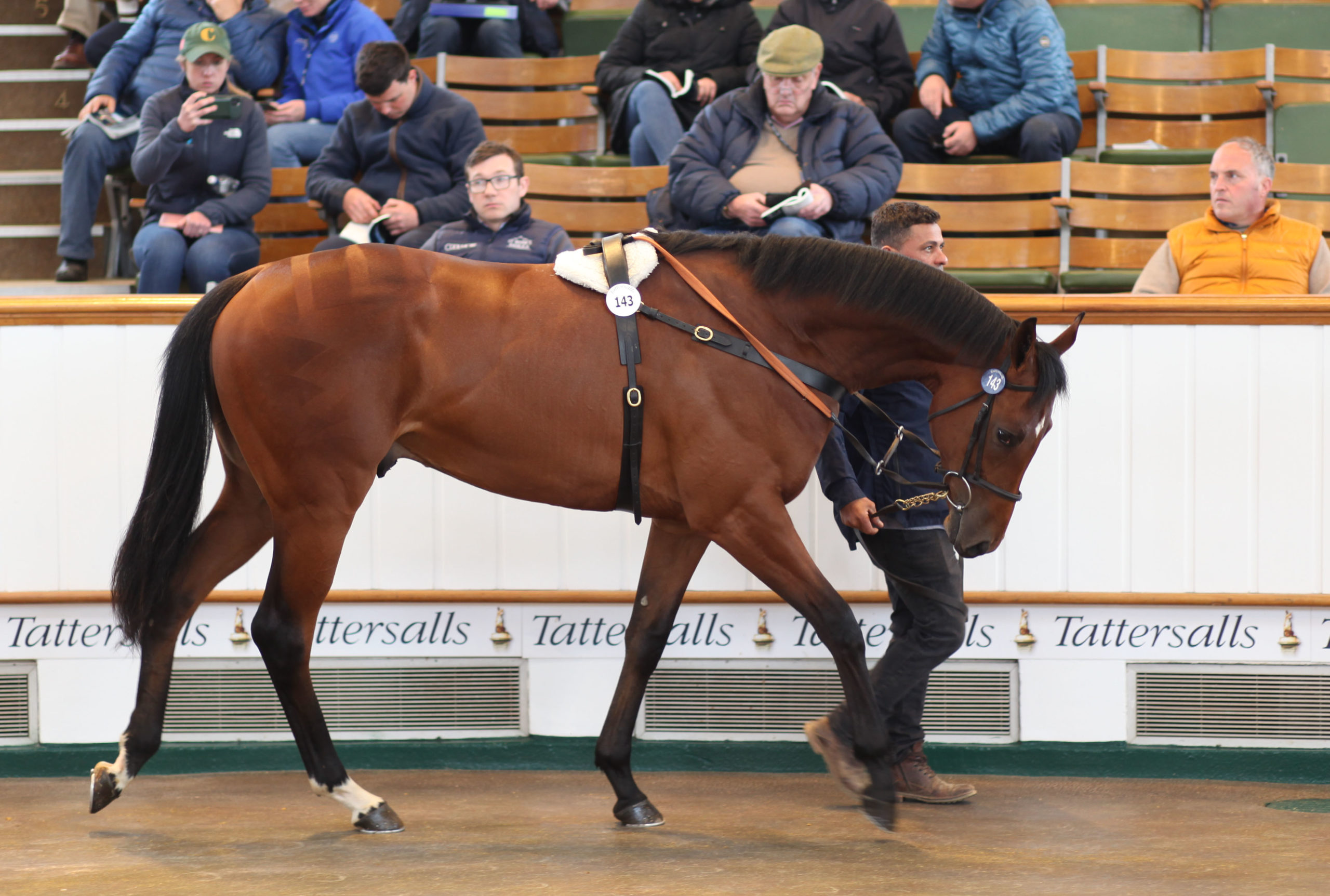 Fresh from celebrating the success of Go Bears Go in Wednesday’s Merriebelle Stables Commonwealth Cup Trial Stakes at Ascot, trainer David Loughnane was quick to return to the breeze-up well, going to 125,000gns for a second-crop daughter of Highland Reel from Aguiar Bloodstock. The third foal out of the winning Fastnet Rock mare Rock Kristal, a relation to 2,000 Guineas winner Footstepsinthesand, the filly had been a €16,000 Goffs November foal purchase by Robson Aguiar.

“Obviously she breezed very well,” said Orlandi. “Dave has done very well with breezers – Go Bears Go is a big advertisement for that. He came here after racing yesterday, saw the filly this morning, liked her and she came well recommended.

“He has a Highland Reel that we bought as a weanling that he likes, so that gave us a bit of confidence as well.”

John Ryan, meanwhile, will take charge of a Zoffany colt for whom his long-term owner Graham Smith-Bernal paid 110,000gns through Jamie Piggott.

Out of the unraced Pivotal Era, a Pivotal half-sister to champion Danehurst who is the dam of two winners, the colt provided the high point of the sale for vendor Mayfield Stables.

“He goes to John Ryan,” said Piggott. “We got a nice Ardad at the Craven Sale and I think this horse matches up nicely with him.

“He has a bit of scope, vetted as clean as a whistle and was the third-fastest breeze on our timings – you can’t ask for any more than that.”

He added: “They don’t make Zoffany’s anymore, and he will be missed. It is nice to be able to get one in to John’s yard and no doubt he will do well with him. He has had a lot of success over the years for Graham, and I am really grateful Graham is still supporting us.”

Of the notable pinhooks, particularly successful was RMM Bloodstock’s Awtaad filly who blossomed from a 2,000gns yearling to 110,000gns juvenile. Richard Spencer, acting on behalf of Phil Cunningham, emerged successful following a clash with Stuart Boman and Alex Elliott.

The filly had received a mighty update to her pedigree only on Sunday when her half-sister, Rogue Millennium, made an impressive winning debut at Wetherby. Even so, she boasted fine connections – certainly better than her yearling price would indicate – as a daughter of the Cumberland Lodge Stakes winner Hawaafez.

“It’s what we’re all in it for,” said Mills. “To buy them cheap and sell them well. It’s down to a combination of luck and judgement.

“She sold herself really. She was a great model and mover, and all she’s done is progress and blossom. She was a short little thing when we bought her but she’s just thrived, and she’ll carry on doing so as well.”

Another to hit the 110,000gns mark was a first-crop daughter of Sioux Nation who was bought by James Delahooke on behalf of Bob and Pauline Scott of Parks Farm Stud. The second foal out of the winning Qamarain (Hard Spun), she had been pinhooked by vendor Shanaville Stables for just €16,000 as a Goffs Autumn yearling.

The Tattersalls Guineas Horses in Training Sale was topped by the Group 3-placed Halimi, who was sold out of Simon and Ed Crisford’s yard for 80,000gns to Marco Bozzi.

The five-time winning six-year-old came into the sale in good form, having defeated Red Verdon in an extended two-mile handicap at Wolverhampton on his penultimate start.

“He is exactly what my client is looking for – a horse who can stay and run in Group races in Italy,” said Bozzi. “He is sound, he vetted well and he likes good ground.

“He goes into training with Bruno Grizzetti. We have two or three staying Group races in Italy from now until July, and then a lot over this sort trip from September to November.” 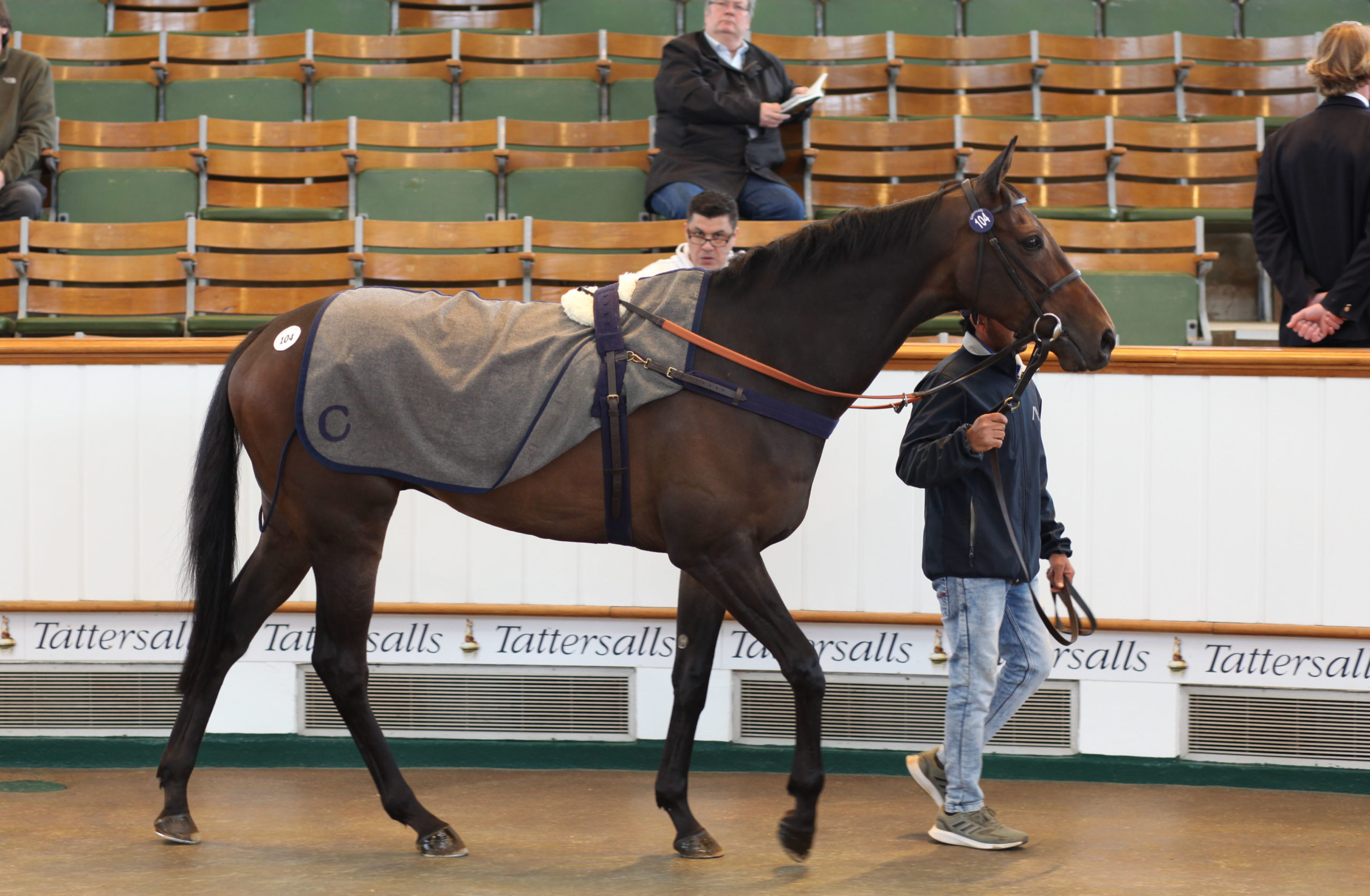 Up Next
The Finish Line with Ted Durcan