Few events inspire such excitement and respect as Royal Ascot; it’s a national institution and arguably the social highlight of the summer, combining pomp, ceremony, history, heritage, fashion and, of course, racing.

Over the course of five days, some of the best horses and jockeys on the Flat compete in 18 Group races; this is spectacle enough, but the rituals around the event, plus the inimitable style of socialites and casual racegoers alike, all combine to make for an incredible Great British experience.

For the second year in a row, the Royal Ascot Style Guide, which plays a key role in predicting the season’s trends and offers guidelines to racegoers seeking to adhere to the Royal Meeting’s dress code, has been produced with luxury cruise line Cunard. Renowned stylist Prue White has collaborated on curation of the looks, which include pieces from Victoria Beckham, Jimmy Choo, Erdem, Zimmerman and Emilia Wickstead. Millinery from the likes of Philip Treacy OBE. Edwina Ibbotson and Rachel Trevor Morgan are also featured in the Style Guide.

Karen Millen’s current collection jumpsuit features in the 2019 Style Guide; it was, of course, only two years ago that the jumpsuit was formally accepted as Ascot-appropriate attire. Despite tradition being so key to Royal Ascot, it is not incapable of moving with the times; indeed, this is reflected also in its responsiveness to consumer demand for alternative foods and drink, with brand new plant-based menus for 2019 having been created by Phil Howard, Raymond Blanc OBE, Simon Rogan and Ollie Dabbous for their respective restaurants. In addition, Sarmado Sibley from Raw Life Love has created a range of menus, which will be served at eight of Royal Ascot’s restaurants, including The Old Paddock and the Lawn Club.

The Village Enclosure, which is located inside the track with a unique view of the racing and royal procession, features live music, boutique dining and of-the-moment bars.

It offers a vibrant twist on the heritage and ceremony of Royal Ascot and was launched in 2017 in response to racegoer demand for the option of a more contemporary Royal Ascot experience.

In a relationship set to last until 2021, Betfred have been announced as Royal Ascot’s official bookmaker and racegoers can expect a truly international event, with nine countries, including Australia, Japan, New Zealand, Singapore and the US, represented in the entries for this year’s Group 1 races.

Founded in 1711 by Queen Anne, who saw the land’s potential for racing, Royal Ascot opens each day with the royal procession, where thousands of spectators can see the Queen arrive with her guests. Outside of the Royal Meeting, Ascot racecourse has a further 21 days of both Flat and jumps racing, including the finale of the Flat season, QIPCO British Champions Day in October. 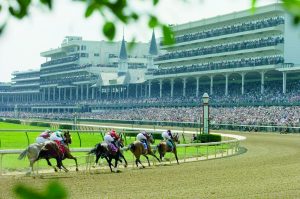 Up Next
Coming up roses