Few destinations elicit such mixed reviews as Dubai, but there’s no denying that it does glitzy modernity extremely well, with its über-luxurious hotels, towering architecture and immense shopping malls, crammed with labels and brands. Its climate is, naturally enough, also a drawcard for sun-starved Brits, happy to tackle the seven-hour flight when warm desert temperatures await at the other end.

Yet for all of its rooftop bars and glittering retail spaces, Dubai remains a traditional Arab society with a strict code of laws – and punishments for breaking them. This shouldn’t deter people from visiting, however; a modicum of sense and respect will see tourists welcomed warmly and without trouble.

These traditional roots manifest themselves in other, more pleasant, ways, as well – for all the complaints that there is no ‘authentic’ culture to be found in Dubai, it may simply be a case of having to look a little harder for it. After all, it’s easy to bypass tiny teahouses and bustling souks when one’s eyes are drawn skywards to the Burj Khalifa which, at 2,717 feet tall, is the world’s tallest building – and you could be forgiven for omitting to browse Dubai’s rich assortment of galleries, housing impressive collections of Arabic and Islamic art, when you’re fixated on browsing the malls.

By the same token, when one is busily seeking out the best pools and beach clubs at which to enjoy the sunshine, they may neglect to notice the traditional wooden abra boats on Dubai Creek, which are used to shuttle people between the historic neighbourhoods of Deira and Bastakiya. Pearl diving and fishing, which used to be the primary components of Dubai’s economy, depended on the salt waters around the estuary where the Bani Yas tribe first settled, and the area still retains much of its historical charm: it is interlaced with the winding alleys of the souks, stuffed with textiles, gold and spices, which visitors can lose themselves in, eventually emerging to take to the waters of the creek in an abra for just AED1 (less than £1) per ticket.

Getting out of the city completely is also something that every traveller to Dubai should do: with the desert in such close proximity, there are magical Bedouin experiences to be enjoyed, such as overnighting in a luxury camp or riding on a camel’s back, while thrillseekers might feel compelled to take on the endlessly undulating dunes with a 4WD or quad bike.

Dubai plays host to a number of festivals and events throughout the year, predominantly during the balmy winter months before the searing summer temperatures spike, and these provide the ideal focal point to a stay. Yes, there’s the Dubai Shopping Festival, which runs from late December to early February and offers huge discounts and promotions, but there’s also the ten-day long Jazz Festival in February, which is now in its 17th year and features performances by local and international jazz and blues artists at venues across the city, before Dubai Media City plays host to the main event over the final three days. Food lovers will revel in the delights of the Dubai Food Festival, which runs from the end of February through to March, and showcases the wealth and diversity of places to eat in the city, from low-key budget eateries to Michelin-starred restaurants.

March also kicks off Dubai’s two-month long art season, two of the highlights of which are the SIKKA Art Fair and Art Dubai, held in the historical Al Fahidi neighbourhood and Madinat Jumeirah respectively. In terms of street art, exciting things are afoot at Jumeirah Beach Road which, as well as as being touted as one of the hippest places in Dubai, is also having its blank beach walls transformed by a team of 30 Emirati, Arab and international artists. As part of the Jumeirah Project, this mural makeover forms the fourth phase of the Dubai Street Museum initiative, which aims to turn Dubai into an open-air museum.

March, of course, is also the month that Meydan racecourse hosts the biggest sporting and social occasion of the year, the Dubai World Cup. Preceded by the Dubai World Cup Carnival, a series of ten race meetings running from January 3 to March 9, the racing season in Dubai provides a global world stage, drawing some of the biggest names in the industry.

This year the Dubai World Cup will be held on March 30 and is set to enhance its reputation as the world’s richest day in horseracing, with total purses for the card, featuring six Group 1 and three Group 2 races, increasing from US$30 million to $35m. The day ends in suitably celebratory style, with the closing spectacular of the Dubai World Cup show and entertainment – and, despite the lavishness of the event, it’s extremely accessible to all, with general admission tickets priced from £4. 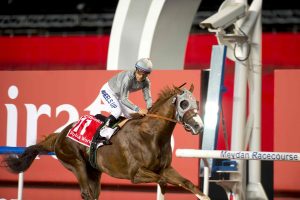