Billed as ‘the greatest two minutes in sport’, this year’s $3 million Kentucky Derby will mark the 145th incarnation of the event. Held on the first Saturday in May, the ten-furlong race for three-year-olds may itself be over in a flash, but the process by which horses qualify for the honour of running in it is lengthy: this will be the seventh consecutive year in which a tiered points system in select races will determine which horses will run. Known as the Road to the Kentucky Derby, this is a series of 35 races at tracks both countrywide and worldwide, with points awarded to the top four finishers in each race. The 20 horses with the highest number of points get to enter the event’s starting gate.

Of course, where there is racing there are also hats, and the Kentucky Derby has become as synonymous with extravagant headwear as with horses. The tradition dates right back to the first-ever running of the Derby, largely organised by Colonel Meriwether Lewis Clark jnr. Having spent time in Europe, attending the Epsom Derby and meeting with members of the French Jockey Club, he sought to create a similar spectacle at home. Recruiting fashionable women was one of his methods for attracting his target clientele; from the 1960s onwards, with attitudes around fashion becoming ever-more relaxed, the headwear seen at the event became increasingly flamboyant.

With around 160,000 attendees, there are plenty of reasons to want to stand out, and this year, Christine A Moore, known for her extravagant and stylish headwear, is the Kentucky Derby’s featured milliner for the second year in a row. “It’s exciting to continue as the featured milliner for the 145th running of the Kentucky Derby,” said Moore. “The historic race may be the most important part of the day, but the iconic hats make the Derby a spectacle of fashion and colour that’s unlike any other event in the world.”

Mint Juleps are to the Kentucky Derby what strawberries and cream are to Wimbledon; made with Kentucky bourbon, they’ve been the traditional drink of the event for nearly a century and, each year, almost 120,000 of them are served at the Churchill Downs racetrack over the course of the two-day event – a quantity requiring no less than a whopping 1,000 pounds of freshly picked mint. The cups in which these drinks are served have become, over time, one of the race’s leading collectables; indeed, it’s reported that, in 1939, when the tradition of allowing racegoers to keep their cups started, sales of mint juleps tripled. 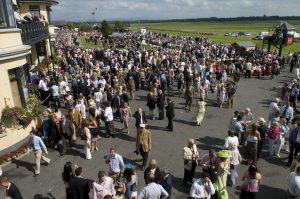 Up Next
Exploring Kildare