It was one of Europe’s premier spa resorts in the 19th century, so taking to Baden-Baden’s curative waters is, of course, a must – after all, the wealthy and fashionable used to flock here to do just that. Establishments vary as to what’s expected from you in terms of your state of undress: at the modern Caracalla baths, named after the Roman emperor who founded the town, swimming costumes are acceptable, but at the Friedrichsbad you’re required to shed your inhibitions along with your clothes, moving nakedly between the bath circuit’s 17 stations, each of which varies as to temperature. Averting your eyes, in case of awkwardness, should present no problem, with a profusion of gorgeous 19th century mosaics to stare fixedly at, or a soaring cupola above, should you wish to keep your gaze safely above human level.

Although perhaps that will depend upon the humans in question: in 2006, Baden-Baden once again became a playground for the socially mobile and affluent when the English football team and their WAGs restored its faded grandeur and put it firmly back on a British radar. One wonders what Queen Victoria who, along with Dostoyevsky and Tchaikovsky, was a regular visitor to the town, would have made of their tabloid-documented posturing. Her disapproval may have been, perhaps, somewhat akin to that which Mark Twain expressed for the town in its entirety, even while acknowledging the healing efficacy of its waters: “I fully believe I left my rheumatism in Baden-Baden … Baden-Baden is welcome to it,” he sniffed. “It was little, but it was all I had to give. I would have preferred to leave something that was catching, but it was not in my power.”

Naturally, whether enamoured of the place or not, such high-profile individuals as the town historically attracted needed a suitably glamorous space in which to play after dark and Baden-Baden’s casino, set within the neo-classical Kurhaus, amply answered that need. Known as the most beautiful casino in the world, it was inspired by the Palace of Versailles and, as such, is almost outrageous in its opulence, with ceilings that drip chandeliers and gold accents gleaming against dramatic red walls and floors.

While the 12 thermal springs, which produce Germany’s hottest and most mineral-rich waters and run deep beneath Baden-Baden, were what drew the glitterati, it was sometimes the casino that kept them there; indeed, Leo Tolstoy was so addicted to the roulette table that he had to borrow money from his peers to feed his passion and again eventually, it is rumoured, to pay for his passage out of town – while Dostoyevsky was simultaneously so ruined and so inspired by his time here that he wrote ‘The Gambler’.

Nevertheless, it’s strolling that comes to mind on a preliminary exploration of the town. It’s easy to imagine the fashionable set of yesteryear combining fresh air with being seen and pausing to pass the time of day with acquaintances: Baden-Baden is a town that seems to have been designed with elegant meandering in mind, something that’s still evident today in its beautifully unhurried pace.

Unlike other German destinations, Baden-Baden was largely untouched by the devastation of the World War, a fact that contributes largely to its old-world charm. The Lichtenaler Allee, which runs beside the River Oos, is filled with roses and exotic trees; elsewhere, gracious gardens and Victorian edifices provide the backdrop to relaxed exploration, with sherbet-coloured buildings and cosy cafés, plus a handful of churches, both gold-bulb-topped Russian and charmingly traditional English.

Head to the cobbled square between the town’s two thermal baths; here lies the Fettquelle fountain: the misty plumes you see rising from the grates are not those of a city-wide steam system, as they are in New York, but of the thermal waters themselves. For those wishing to stretch their legs and horizons even further, Baden-Baden is, of course, nestled in the foothills of the Black Forest, which offers hikers a multitude of trails.

If it is views without exertion you crave, then the funicular railway – the longest and steepest in Germany – soars to the summit of the 2,191-foot Merkur Mountain and offers a panorama of surrounding mountains, far distant cities and of the ruins of the Hohenbaden Castle. The latter, too, is well worth a visit, even were it not for the absence of an entry fee. Occupied between the 11th and 15th centuries, it offers secret dungeons, maze-like passageways and a castle keep, which can be accessed for incredible views by way of steep staircases.

The region is home to no fewer than six championship golf courses, including the Baden-Baden Golf Club which, founded as it was in 1901, is Germany’s third-oldest. With its claim to be one of Germany’s finest natural golf courses, what it lacks in ostensible difficulty (its 4,260m, par 64 length, falls short of many other championship courses) it makes up for in subtlety, with even experienced golfers often struggling to achieve scores in line with their usual levels.

And, of course, there’s the racing, which has taken place at the Baden-Baden Iffezheim racecourse since 1858, when enterprising Frenchmen Edouard Bénazet, who had already capitalised on the 1838 closure of Parisian casinos by launching Baden-Baden’s, saw an opportunity to create another glamorous draw for his clients.

Three meetings take place over the course of the year: The Spring Meeting at the end of May, the Sales & Racing Festival in mid-October and, perhaps most thrillingly, late August’s Big Week. Running this year from August 24 to September 1, this event has long been the pinnacle of German racing, with a generous helping of glamour thrown in, of course.

The involvement of Longines, as official timekeeper and sponsor, since 2011, has raised the profile of the event, attracting racegoers from all over the world. As relaxed as Baden-Baden usually is, it springs into a blaze of life for the occasion, and public spaces buzz with live music and pop up events, while the city’s remarkably upmarket retail spaces (one cannot see that the 2006 WAGs would have found anything to complain about here) are awash with stylish individuals completing their raceday look. 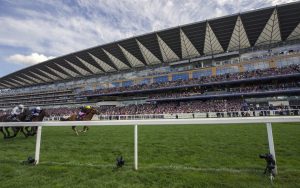 Up Next
Royal Ascot